Tony Jurado sees the big picture finally starting to come together, not just from the cockpit of his Capitol Punishment Mustang Funny Car, but from the business side of racing, too.

The Northern California commercial glass contractor is no stranger to big business, but like the window shades opening on a big plate-glass window, everything is coming into focus for his first-year professional team.

Jurado is flying the colors of PureCrop 1 -- a biodegradable Swiss Army knife of a farming formula that simultaneously eliminates pests, mold, and mildew on plants while also supercharging their growth -- at the Dodge//SRT NHRA Nationals in Las Vegas and at the season-ending Auto Club NHRA Finals in Pomona, bringing to fruition some of the seeds he planted early in his rookie season. Company founder Ray Drysdale, whom Jurado met earlier this year through Keith Erickson, who also sponsors the car through his Performance Caulking business, is on hand to see the sponsorship’s debut this weekend in Las Vegas.

So what does Jurado do Friday with his sponsor in the house? Makes his first career three-second pass, that's what.

The event is the fourth of Jurado’s rookie season in the big leagues after years of competing in regional fast doorslammer classes and Nostalgia Funny Car, and things are finally coming into focus there, too.

"I'm starting to see the track open up now; when I started, it was like this,” he said, raising his fist to his eye with a quarter-sized hole. “It feels like you can't see anything. Everything’s just shaking so hard and your brain doesn't allow you to keep going. 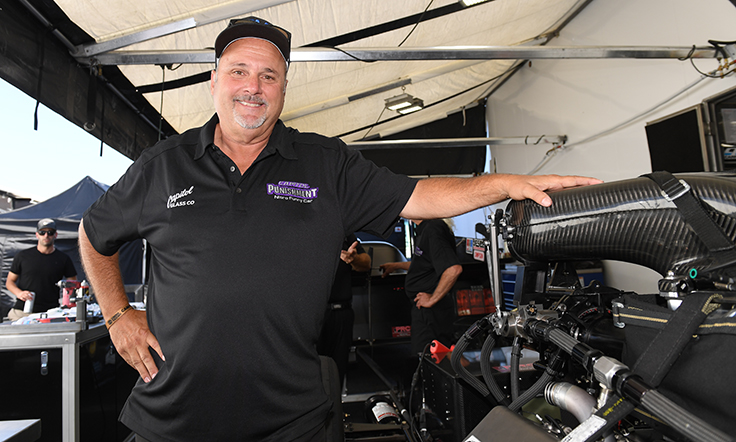 “A big problem for me was equipment that I didn't have adjusted correctly. The belts had to be way tighter, the chin strap had to be down, and I'm a big guy, so I fill out that cage. The padding was too tight so it was banging me around. Now I have the perfect amount around me. That's when things started happening.

“Now every time I do it, I'm starting to be like about here,” he said, framing his face with both hands. “I’ve only got 15-20 runs tops if you add up everything from testing and licensing. I think it's going well, but I know I have to be patient. I anticipated coming out and just driving this car down the track, but after talking to enough of these guys out here, I realize, hey, it's not that easy. I’ve just got to relax and keep doing I’m doing.”

Jurado and crew chief Jason Bunker has run three races this year -– his debut at his hometrack in Sonoma, Indy, and Charlotte -– and missed the field only in Indy, where qualifying was shortened by rain and Jurado lost his only attempt due to a fuel leak on the starting line.

“That was heartbreaking to drive all the way out there and then not get to run,” he said, “but John Force said, ‘Hey, just put your stuff in my shop and run Charlotte.' We flew home, flew back, and went 4.09 on our first run, so it felt like things were working well .

“I know that I’ll probably never catch up to the John Forces and Don Schumachers of our sport, but I would like to go out there and have them look over and go, ‘You know what? We better be on our game. These guys can run.’ That's all I'm looking for.”

Jurado would like to finish out his final two races with some round wins -– “That's my goal. If I can make it, if I can get by a round, that would be amazing -– and then focus on 2021. 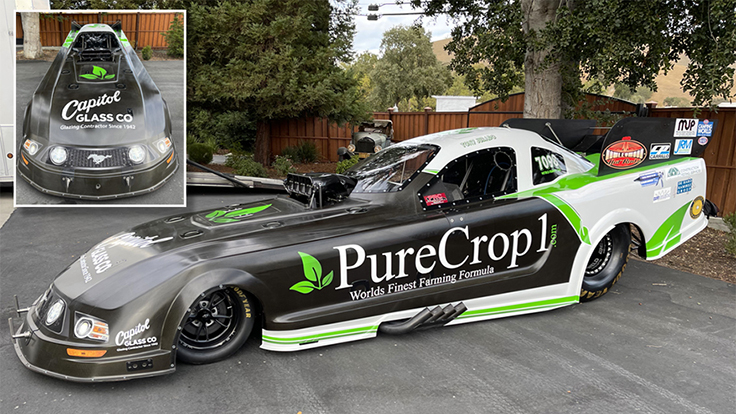 Jurado is looking at running Pomona, Phoenix, Sonoma, and Seattle, and both Las Vegas events in 2022, then return to Indy and, with hopes to run the St. Louis event in cooperation with Peerless Window, which is based in the Gateway City,

“Until I was able to finalize the deal with Ray and PureCrop, I just sponsored it all myself, and it took about $1 million to get to where I’m at, and I’d really like to not continue to have to fund it all myself," he said. "For 2022, I want to market five races next year. I have three deals going. I'm hoping to have those come through, then I can race. And then we'll go race by race. after that, but I don't want to get ahead of myself.

“I’ve got some talks going on now with some sponsors who can bring something to the team as a major sponsor and get a spot on the hood or the side of the car or rear-quarter panel. That’s what we’re looking for. I have a business development manager who’s sending out proposals and we have some meetings scheduled, so it’s all very exciting.”

Jurado has seen the growth benefits of PureCrop 1 first hand on trees he planted around his new shop earlier this year, and hopes that the new sponsorships can do the same for his racing fortunes.