Tommy Johnson Jr. makes most of opportunity, beats John Force in a thriller

Filling in for defending Funny Car world champion Matt Hagan, who missed his second straight race due to COVID-19, Johnson drove to the win with a run of 3.926 at 330.23 to beat John Force in the final round of the Mopar Express Lane NHRA Nationals presented by Pennzoil.
12 Sep 2021
Josh Hachat
Race coverage

You can now call Tommy Johnson Jr. the super sub.

Filling in for defending Funny Car world champion Matt Hagan, who missed his second straight race due to COVID-19, Johnson drove to an incredible win on Sunday at Maple Grove Raceway, delivering a run of 3.926-seconds at 330.23 mph in the 11,000-horsepower Mopar Dodge Charger SRT Hellcat to beat John Force in the final round of the Mopar Express Lane NHRA Nationals presented by Pennzoil.

In a remarkable final round at the first race of the Countdown to the Championship, Johnson beat Force’s 3.946 by just .003, with all the points going to Hagan as he tries to defend his crown. If it happens, he’ll owe plenty to the veteran Johnson, who never could have expected to be in this position two weeks ago. But after not racing this year, Johnson jumped at the opportunity to fill in while Hagan recovers and enjoyed a moment on Sunday he won’t forget in earning his 23rd career win.

“It was pretty cool. I was astonished. We’ve come a long way in a week,” said Johnson, whose first career Funny Car win came at Maple Grove Raceway in 1999. “It meant a lot and I kept thinking of my dad (who passed away earlier this year) all day. The sport of drag racing is my whole life and to come out and win for these guys, it’s just amazing. I’m still astonished it happened. It was about as smooth of a transition to make this happen. To come out here and get a win, this race will mean a ton to me.” 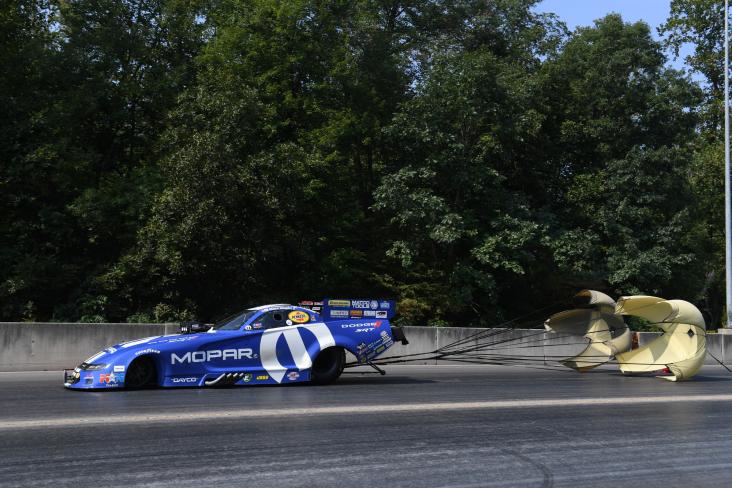 Johnson picked up round wins against Jim Campbell and DSR teammate Ron Capps, running 3.892 in each round. He went a stellar 3.902 at 331.53 in the semifinals to squeak past J.R. Todd, advancing to the final round for the 57th time in his career and the first time this year.

The consistency from the team, which is led by standout crew chief Dickie Venables, was remarkable, helping carry Johnson to the winner’s circle. Things didn’t go well at Indy during the lone qualifying session, as a parts failure led to the team not qualifying, but they bounced back in Reading, with Johnson getting the best of Force in the final.

“It’s hard to sit out that long and these cars accelerate so fast. To be able to drive them well, you have to get ahead of them and each round it got more comfortable,” Johnson said. “As the day went on, I kept getting more relaxed.

“I know it was close against John. He’s pretty good still and to race him in the final and get this opportunity after not racing all season, that makes it even more special. He’s the best the class has ever had and to top him means a lot.”

After struggling throughout qualifying, Force and his team found something incredible on raceday, getting past Indy winner Tim Wilkerson in a thriller, Paul Lee in another great race and teammate Robert Hight in a fantastic side-by-side duel. Both Force and Hight ran 3.909, but Force was quicker off the starting line to advance to the final round for the fifth time this season and the 261st time in his iconic career.

The good news for Force is he leaves Maple Grove Raceway with the points lead, as the lead changed hands for the sixth straight race in the loaded Funny Car class. He jumped into the points lead and now has a five-point advantage over Hagan after the first of seven playoff races in the class. Ron Capps is third, 15 points back of Force.