One of the most interesting Funny Car battles raging does not include the points leaders but rather Terry Haddock and Blake Alexander, who are battling for the 10th spot in the Countdown to the Championship field separated only by two points.
30 Jul 2021
Phil Burgess, NHRA National Dragster Editor
Feature

One of the most interesting Funny Car battles raging does not include Bob Tasca III, Matt Hagan, or Robert Hight, but rather Terry Haddock and Blake Alexander, as the two independent racers battle for the 10th and final spot in the Countdown to the Championship field.

Haddock, who owns, tunes, and drives his own machine, currently holds a largely inconsequential two-point lead over Alexander, diving for veteran car owner and past U.S. Nationals champ Jim Head, entering the Lucas Oil NHRA Winternationals with just this event and three others left to decide who makes the Countdown field. In their only head-to-head meeting so far this season, Alexander struck an important blow last weekend in Sonoma, where he beat Haddock in the first round. A loss would have put Alexander more than two rounds behind Haddock and with win lights at a premium this season for both teams, that could have almost been a death blow.

Alexander and the Pronto Auto Centers entry reached the Top 10 beginning in Atlanta, where he scored his first round-win of the season, then slipped to 11th in Epping after Haddock surprisingly reached the semifinals. Haddock’s lead over Alexander was single digits until Denver, which the Head team skipped, dropping them to 26 points back, yet Alexander closed the gap again by winning the monster match up in Sonoma to creep within qualifying points of catching him.

Neither driver has ever made the Countdown to the Championship playoffs, and they’re coming at it from different places.

Alexander finished 11th last season (when there was no Countdown due to the COVID-shortened race season) and finished 12th in 2018 regular season while competing in Top Fuel., despite only competing in seven of the 18 events. He missed the playoffs by two positions and about 120 points.

Relaxed and laying back on a couch in the Head Inc. support trailer, taking in the air-conditioned goodness that beats the heck out the Pomona heat and humidity, he was introspective while trying to choose his words carefully. While results are important to any team that has sponsors, Jim Head also has been known to care more about how his hot rod runs than whether or not it turned on the win light, and Alexander somewhat downplayed what seemed like an important win over Haddock in Sonoma. 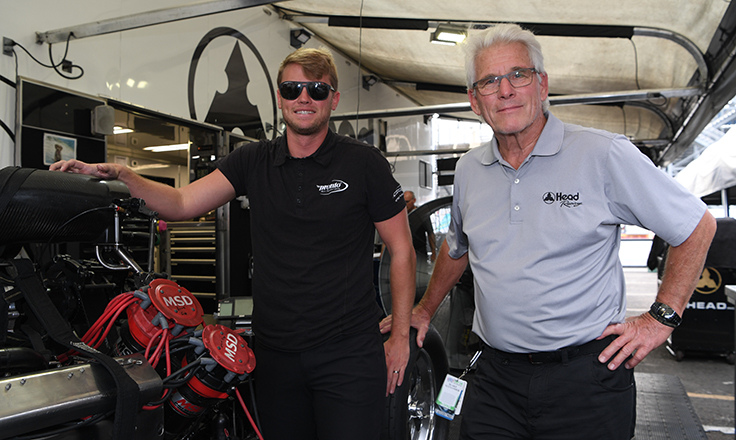 “I wouldn't say we're really trying to make the Countdown, and I think if you asked Jim, he would tell you he doesn't really care about that part of it,” said Alexander. “I guess I'm downplaying it a little bit, but obviously we're aware of what it meant, but I was thinking more that all of my sponsors were [in Sonoma] and I qualified well enough to race someone that we should beat. We picked a good race to do because Sonoma is basically Sponsor Central for Pronto and a lot of my sponsors.

“We went and tested recently, and it seemed to help a lot. We changed blowers. And it allowed us to calm down the bellhousing a little bit. We just were having trouble. We could make good runs --we qualified seventh in Atlanta and Epping – but the car was really close to the edge. With that the way we were running the car, we couldn't necessarily change, if something needed to be moved around. It’s more well balanced now and we'll find out between now and Indy where we're at.

“We have to win rounds, and we have to do all for all the people that support us, because they're sticking with us through the tough times."

Haddock took time to wipe his grease-stained mitts to shake hands as he hurried between wrenching on his own Funny Car and his Top Fueler, driven again at this race by Buddy Hull. The interview was interrupted several times by people needing his input, and his brow was covered in sweat. 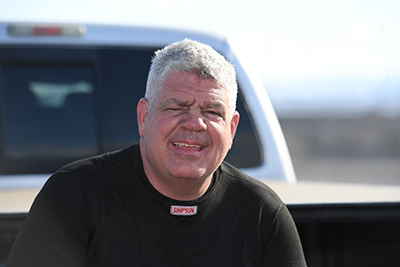 Haddock has a trio of 12th-place finishes, most recently in 2019 in Funny Car and 2017 in Top Fuel, but both times was never within striking distance of the Top 10 as the regular season clock wore down, and making the Countdown is on his mind if for no other reason than the pride he’ll feel at outdueling the better-funded entries of Alexander and 12th-place Jim Campbell in the Jim Dunn Racing entry.

Haddock’s 2021 started off rough with a DNQ at the Gatornationals and a first-round loss at the four-wide event in Las Vegas. A semifinal at the Charlotte four-wide race led to a stunning semifinal berth at the New England Nationals, where he upset Ron Capps in round one and had a competition bye in the second round to climb into the Top 10 for the first time this season. He’s held onto the No. 10 spot despite three straight first-round losses, which allowed Alexander to close the gap.

“We're trying our best,” Haddock offered charitably, “but it would be a monumental accomplishment to make it. We race off what these cars generate. We don't have a budget. A lot of people say, ‘Oh, you should stay home and save money.’ Well, I get no help when I'm home, man. When you're home, you're just like regular people -- you make enough money to keep the light bill paid.”

The tire-smoking loss to Alexander at Sonoma was both painful and exasperating.

“Our crew chief -- that would be me – screwed up,” he admitted. “I still don't know what I missed. We were trying to go out and duplicate that 4.04 [from qualifying] and it smoked tires, and it was just we don't even know why yet.

“At the end of the day, it's their Countdown to lose because that car, like most of these other cars are better financed than us. I'm trying so hard. I put every dime I have all my heart and soul. For us to be where we are. It's a blessing. It's been a neat ride.

“Epping was an amazing deal, but we also ran good in Charlotte, and we've been in the race, and the car is doing better and better. I'm super proud of what we've accomplished, no matter where we end up.”