On Wednesday, racers in Top Fuel, Funny Car, Pro Stock, Pro Stock Motorcycle, Pro Mod, Top Fuel Harley, and Factory Stock Showdown were invited to test at Gainesville Raceway, and many of the teams taking part in this weekend’s Amalie Motor Oil NHRA Gatornationals. For most of the day, the staging lanes were filled as racers began to accumulate data and refine combinations ahead of the official start of the 2021 NHRA Camping World Drag Racing Series, which kicks off on Thursday, March 11. Featured below is a class-by-class overview of the day’s activities. 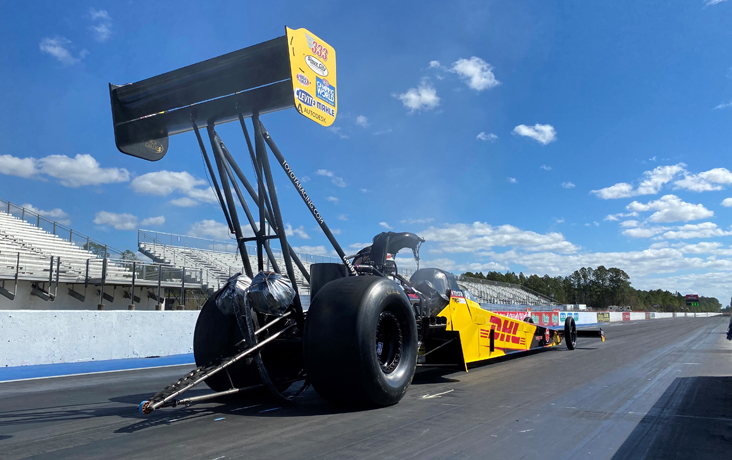 Brittany Force, like the rest of her JFR teammates, sat out the majority of the 2020 season, but you’d have never known it based on Wednesday’s testing at Gainesville Raceway. Force, the 2016 Gainesville winner, set the pace with a 3.691-second run in her David Grubnic-tuned Monster Energy dragster. Force made what was by far the quickest run of the two-day test and appears poised to resume her quest for a second world championship this season.

Antron Brown won the final event of the 2020 season at the Dodge NHRA Nationals in Las Vegas, and based on his testing results, he might once again be one of the favorites to open the season with a victory. Brown was one of a handful of Top Fuel drivers to make runs on Wednesday, and his 3.740, 316.52 pass was easily one of the most impressive, albeit five-hundredths slower than Force. Later, he returned to run 3.782 at only 305.56. Brown also tested last week alongside his DSR teammates in South Florida but also felt the opportunity to run on a national event surface just two days before the start of actual competition was simply too good to pass up.

The busiest driver in Gainesville on Wednesday was world champ Shawn Langdon, who made several runs in his Kalitta Motorsports/DHL Top Fuel dragster and then filled in for teammate Doug Kalitta behind the wheel of his Mac Tools dragster. As someone who also races in big-money bracket events, making eight or more runs in a day is no big deal to Langdon, although multiple runs in a nitro car tends to take a higher toll on the body. Langdon ran a best of 3.75 in his own car, and his most successful runs in Kalitta’s car were in the low 3.8-second range.

Yesterday, Mike Salinas watched from the starting line as daughters Jianna and Jasmine made runs in Pro Stock Motorcycle and Top Alcohol Dragster, respectively. Today, Salinas made a couple of runs in his Scrappers dragster, including a 3.811, 271.95 mph and a 3.855, 268.54. Salinas had some of the best early numbers with a 3.00 eighth-mile at more than 288 mph. Clay Millican returned for the second day of testing in the Mike Kloeber-tuned Parts Plus dragster with a coasting 4.02, 224.92. Other drivers making runs included Doug Foley, Scott Palmer, and Mike Bucher, who continues to work towards his nitro license. Bucher’s best was a 4.30, 274.94.

Sixteen-time world champ John Force has not made a run at Gainesville Raceway since the 2019 season but one would have never known it based on his results on Wednesday. Out of action for almost the entire 2020 season, Force made runs last week in South Florida, and then set the pace in his Blue Def Camaro with a blistering 3.873 at 330.30 mph, the top speed of the entire two-day test. Force also came back later in the day to run a 3.910, 328.14. Teammate Robert Hight also tested his Auto Club Camaro, but shut off early on his two runs.

J.R. Todd joined his Kalitta Motorsports teammate Langdon in testing and drove to a solid 3.962 at 309.70 in his DHL Toyota. Todd made at least three runs in the three-second zone. Alexis DeJoria, in her new-look RoKIT/Bandero Toyota, made at least one run that compared favorably to Todd’s but chopped the power well short of the finish line and recorded a 4.030, 265.22 effort. Later, she lit up the scoreboards with a competitive 3.95 effort.

Blake Alexander, Bob Tasca III, and Chad Green all tested yesterday and returned for more action today. Alexander, in Jim Head’s Mustang, ran 4.120. 278.58, and Tasca shut off early on his two attempts before returning late in the day to challenge Force for low e.t. with a very competitive 3.887, 329.75. Green improved his best to a 4.067, 300.06 in his Mustang, which is tuned by Tim Wilkerson and Richard Hartman. 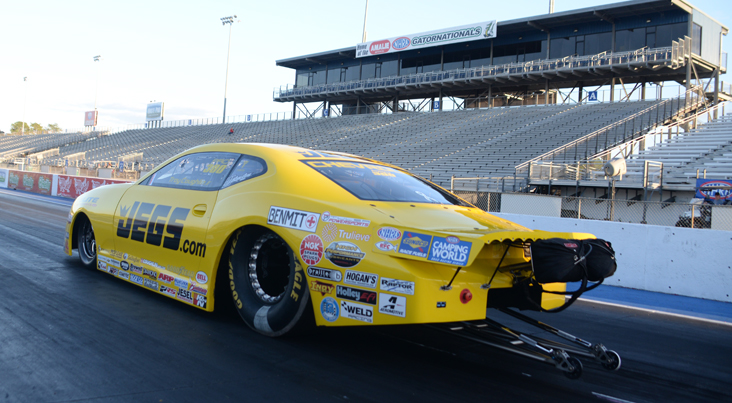 On Tuesday, the only two Pro Stock drivers to make runs in Gainesville were the father-son duo of Chris and Mason McGaha. That wasn’t the case on Wednesday with a host of others, including world champ Erica Enders, joining the action. Tire shake forced a number of runs to be aborted early with Enders, Elite teammate Aaron Stanfield, and Kenny Delco among the victims.

Fresh off their win in the Orlando Doorslammer race, the Cuadra family also made runs in their three Mustangs, which are powered by engines from Frank Iaconio. While they weren’t able to match the low 6.5-second pace they set in Orlando, Fla., all three Cuadra entries appear to be far more competitive than last season. 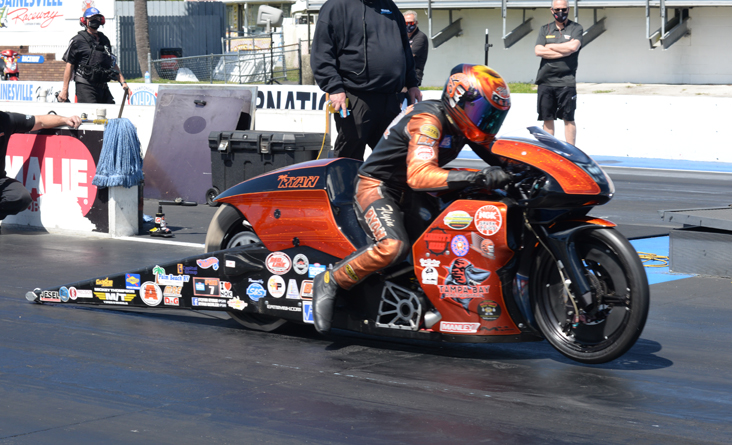 More than half of the Pro Stock Motorcycles that are entered for the Amalie Gatornationals made test runs on Wednesday, which is not surprising because there are a lot of new things happening in the class, including the introduction of the four-valve Suzuki cylinder head. Between tire spin and a crosswind, that seemed to pull several riders towards the retaining wall, full-throttle runs were at a premium, but Ryan Oehler delivered a 6.863, 195.42, which was matched by Joey Gladstone riding the new Suzuki entry for the Reed Motorsports team.

Angelle Sampey, who is returning to a Suzuki after spending the last couple of years on a Harley-Davidson V-Twin, was one of the riders who encountered issues. The three-time champ came dangerously close to the retaining wall on her first run and later collected the finish-line timing blocks.

Some of the other riders who took part in the test included Jerry Savoie, Jianna Salinas, Marc Ingwersen, David Barron, Cory Reed, Jimmy Underdahl, Chris Bostick, and Hector Arana Jr. There are 21 Pro Stock Motorcycles on the grounds in Gainesville, so there figures to be a lot of bumping when it comes time to fill the 16-bike field. 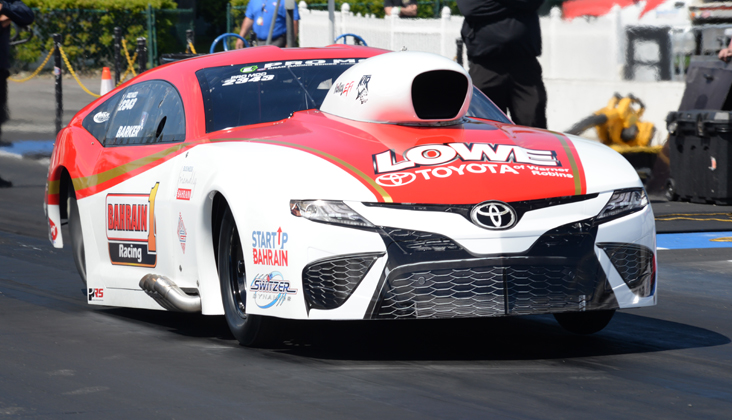 This much is certain: Pro Mod drivers like to test, so Wednesday’s open session in Gainesville was like a national holiday for racers in the E3 Spark Plugs NHRA Pro Mod Drag Racing Series who combined to make nearly 50 runs during the day. Most Pro Mod drivers were either content to shut off early or forced to due to tire shake or spin. The best run of the day came from Florida’s Kris Thorne, who wheeled his Camaro to a 5.709 with a speed of just 222 mph. Thorne crashed his turbocharged car last year in Indy and returned a short time later in Gainesville with a new car. He’s now joined the ProCharger crowd, and it seems to be working out well for him. Jeffrey Barker was second quickest with his nitrous-equipped Toyota with a 5.713, 252.95.

Brandon Snider, who finished second in last season’s hotly contested points battle and carried the colors of J&A Services on his supercharged Corvette, drove to a 5.727 at 251.91 mph to challenge Thorne and Barker for the top spot.

To no one’s surprise, Rickie Smith was also in the mix with his Sokal-backed nitrous Camaro. Smith, the winner of the 2020 Gatornationals held last September, recorded a 5.809 at just 246.03 mph. Smith later improved to a 5.726, proving that the nitrous combination remains a viable option. Justin Bond, also a winner on the NHRA tour during the 2020 season, wheeled his ProCharger-equipped Camaro to a 5.846 at just 214 mph later in the afternoon and charged to a 5.73. Eric Latino also found the 6.8s with a 5.832 in his Camaro, which is also supercharged.

The most active driver in the test, by far, has been Luis De Leon, who has spent the last two days making shakedown runs in Jose Gonzalez’s new ProCharger-equipped Camaro. De Leon has yet to make it to the finish line under power, but not for lack of effort. In four runs on Wednesday, he managed a solid 5.92 with a top speed of just 205 mph.

In Pro Mod, there are 26 drivers expected to compete for just 16 spots, and the class’ top quarter-mile series has attracted several new competitors for the 2021 season. Ironically, none of the 26 cars in the field are turbocharged, as that combination has fallen out of favor with competitors who now seem to prefer ProChargers or conventional roots superchargers. The nitrous contingent still includes Smith, Jeffrey Barker, and Chad Green, who is pulling double duty with his nitro Funny Car. 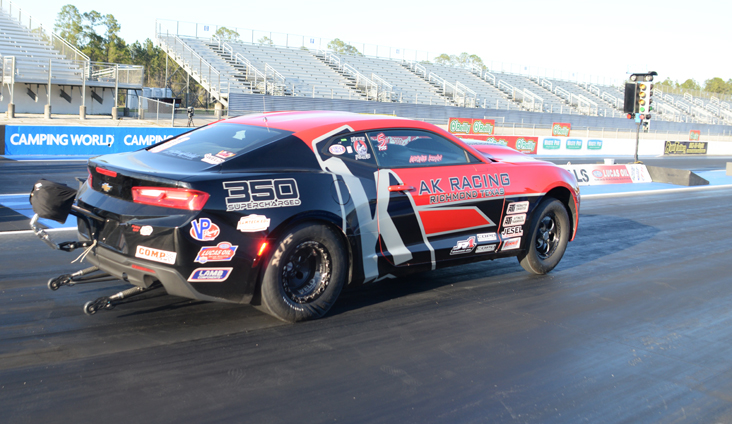 When it comes to testing, the races in the Factory Stock Showdown were willing to give the Pro Mod guys a run for their money. Most of the drivers who ran on Wednesday ran in the seven-second zone with engine builder David Barton making the best run of the day with a 7.836, 175.30 in his COPO Camaro. Barton also connected on a 7.853-second pass, providing a level of consistency that is sometimes hard to come by in the Factory Stock class.

Arthur Kohn also picked up a couple of respectable time slips with his COPO Camaro after a 7.874-second run at 175.05 mph followed by a 7.953. Kohn races as a teammate to Stanfield, who set the pace yesterday with a 7.73-second run. Jesse Alexandra tuned up for Friday’s qualifying with a 7.904, which he backed up with a 7.932, both well more than 170 mph.

The other driver in the sevens was Lee Hartman in his show-quality Carrier Services Group COPO Camaro. Hartman posted a best of 7.987, 170.43. 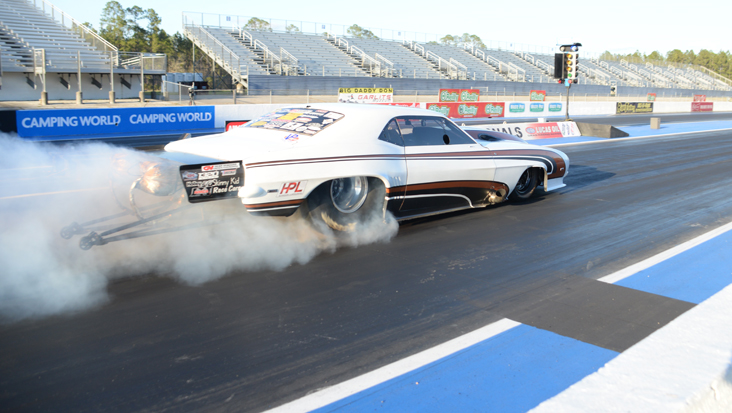 It’s far from the truth but runs in the 5.1-second zone seem to come easily to Top Alcohol Dragster teams these days. On Wednesday, three more racers turned in time slips in that range with Robin Samsel having the quickest at 5.174 followed by Jasmine Salinas with a 5.188 in her new dragster, which is now being tuned by Rich McPhillips Sr. and Jr. Matt Cummings, who is also tuned by the McPhillips family, was also impressive with a 5.197.

Perhaps the most impressive run of the entire test came late Wednesday when Tom Bailey drove his street-legal Camaro to a 5.977, 230.65. Bailey, a star of the Hot Rod Magazine Drag Week event, has run as quick as 5.77 with his turbocharged entry. He is scheduled to take on Rod Tschiggfrie’s equally potent Sorceress Olds Cutlass in the Street Car Showdown, a special event that may well determine who has the quickest and fastest street legal car in North America. Tschiggfrie’s entry has already run more than 260 mph, and late on Wednesday, he broke into the fives for the first time with a 5.99.