Pro Stock hasn’t visited New England Dragway since 2018, so this year's New England Nationals will mark the first time that Pro Stock racer Deric Kramer has ever been to the facility. He plans to make a big first impression.
08 Jun 2021
Josh Hachat
Feature

For Deric Kramer, though, the sixth race during the 2021 NHRA Camping World Drag Racing Series season marks the first time he’s ever been to the facility. Coming off his first final round of the year to continue his strong start to the season, Kramer is hopeful to make a strong first impression in front of what’s expected to be another huge crowd.

“It’s very exciting. It’s always fun to go to a new place,” Kramer said. “Having people there and excited, it’s going to be a blast.”

A debut at a new track always raises the energy level, and the way Kramer is performing in his Get Biofuel Chevrolet Camaro, it can be a favorable debut at New England Dragway as well. 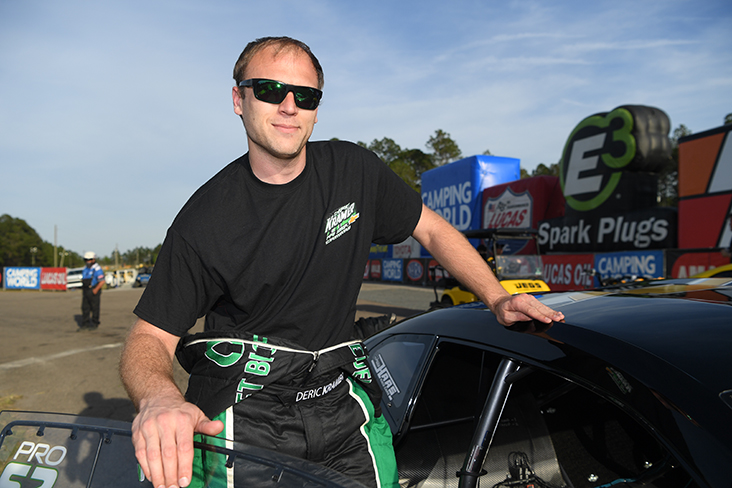 His final-round showing in Houston bumped him to second in points behind Greg Anderson, and it also marked his second final of 2021. Add in two more semifinal appearances and Kramer has already enjoyed more success this year than all of 2020.

He struggled a year ago, advancing to only one semifinal and finishing 10th in points in a stout Pro Stock field.

A strong start opens up a world of possibilities, and Kramer has praised the performance of his car, along with a few fortuitous breaks he’s enjoyed early in the year.

“We finally got a little bit of luck on our side. The class is so tight and so close, I’ve been on the wrong side of things the last couple of years,” said Kramer, a four-time event winner. “We go to every race with the intention of winning. We don’t show up thinking there’s only an outside shot. We show up with the mentality of we rent some of the best power out there [with KB Racing], so let’s go rounds and win races. If we don’t, then the onus is on us. All I can say is we’re hungry for a win.”

While the car has performed at a high level for most of the year, qualifying second in Atlanta, Kramer expects more out of himself behind the wheel.

He feels a step behind, in part because he hasn’t been as active away from the track due to the COVID-19 pandemic. It put a stop to many of the sporting activities he enjoys — like fencing — because they’re done in groups, and he’s had to find other avenues to stay in shape.

Recently, it’s led to more outdoor workouts, and Kramer expects to resume his normal activities soon, which he hopes paves the way for a big summer for the team.

“The car is way outperforming me right now, and it’s not even close. I’ve not been doing a very good job this year,” Kramer said. “I have to step it up. I’m trying to do more and putting in more effort to get workouts and physical activity in, so hopefully, that helps. Our best racing has always been in the summer, so we’re looking to build on our start and perform at a high level this summer.”