News and notes during final eliminations at Summit Racing Equipment Motorsports Park. This will be updated throughout the remainder of the event.
27 Jun 2021
Josh Hachat
Race coverage

Clay Millican was on the starting line on Sunday and so was his Parts Plus/Wal Mart dragster, but the veteran was not behind the wheel as he watched Austin Prock pick up a win in the first round in his Top Fuel dragster. An inner ear infection caused the popular driver to opt out of the weekend after he didn't feel right following Friday's qualifying session.

In stepped Austin Prock, NHRA's 2019 Rookie of the Year, who jumped at the opportunity at a moment's notice. Prock qualified fourth with a 3.764 and then got the victory after Krista Baldwin's car broke during the burnout. It was an odd feeling for Millican to be watching and not driving, but he knew Prock was the right person to fill in this weekend.

"Thank goodness Austin was here, but this was one of the hardest things I had to do in my life," Millican said in regards to not driving this weekend. "I eat, sleep and live drag racing. This is my life. But Austin is a great kid and he deserves to be in the car. I love this place and I look forward to Austin going rounds today."

Millican will be back in the seat at the next NHRA race in Denver next month, but he would love to see Prock come through with a win. Though Prock ran just 4.694 in the opening round, he'll actually have lane choice over Mike Salinas after his wild first-round win against Kyle Wurtzel. Both cars ran into trouble and shut off at about the same exact moment and Salinas even lost the blower belt, but he literally cruised to the finish line in 4.835 at 152.79 to eke past Wurtzel's 4.862. 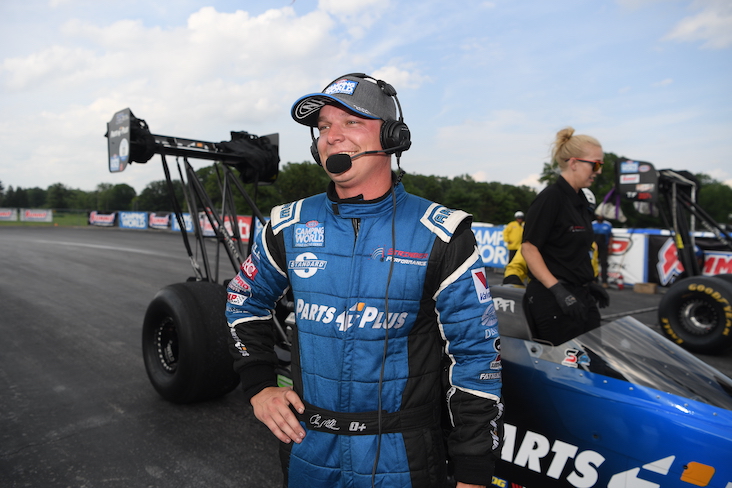 Justin Ashley and his team finally got the run they were after all weekend and it came at a great time. Facing Josh Hart in Top Fuel's marquee first-round matchup, Ashley laid down the run of the round with an outstanding 3.778 at 322.14 to beat Hart's 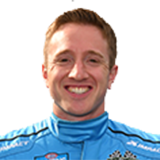 3.818. It was Ashley's best run of the weekend and second-quickest of the opening round, which sets up another marquee matchup in the second round, this time against Brittany Force, who went 3.794 to kick off Sunday.

Making his first Top Fuel appearance in Norwalk, Ashley qualified seventh with a 3.803 and couldn't quite put together the run he wanted in qualifying. That all changed on Sunday in impressive fashion.

"We've been trying to run something like that all weekend and we finally got it right," crew chief Mike Green said. 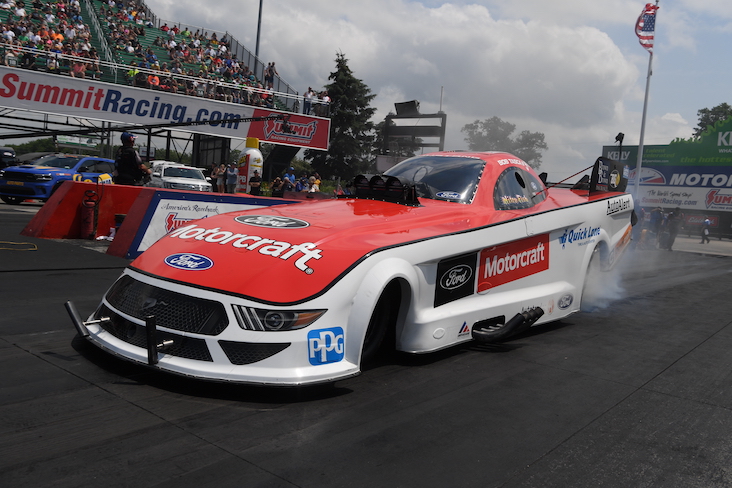 The top four in Funny Car have been bunched up all weekend in Norwalk and that didn't change one bit in the opening round of eliminations. In a wild sequence of events, John Force, Robert Hight, Matt Hagan and Ron Capps all proceeded to lay down a 3.94, with it coming in four consecutive passes.

Nobody could top that and each of them moved onto the next round and the pair of John Force Racing and Don Schumacher Racing teammates continued to set the pace this weekend. Force gets a massive second-round matchup with Bob Tasca III in the next round, with the winner taking over the points lead.

Tasca couldn't match the 3.94s the first four winners put together, but his 4.006 at 323.74 was enough and he looks forward to the challenges of what's turning into a hot race track at Norwalk.

It’s getting dicey out here and that’s what makes this racing so fun. The competition is so tight and it’s going to be hot out here," Tasca said. "The drivers are going to have to play a big role in winning this race, so it’s going to be an exciting day." 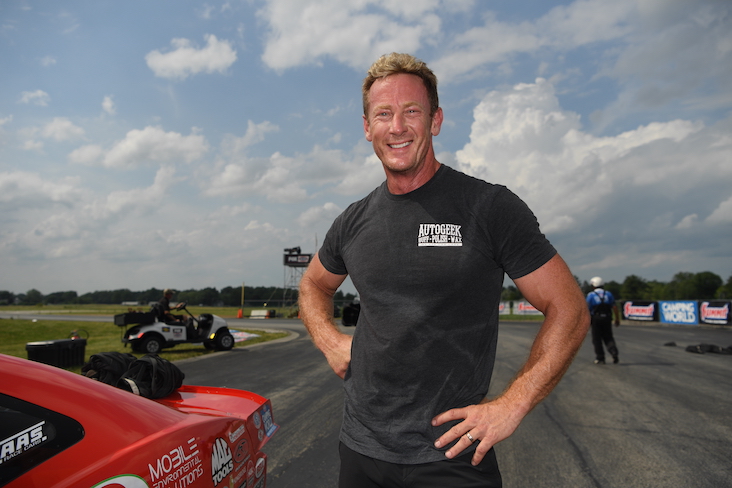 There won't be a repeat winner in Pro Stock as Aaron Stanfield's day was done almost as soon as it began. Stanfield, who won in Epping, shook almost immediately in his first-round race against Fernando Cuadra Jr., ending any shot at a second straight victory. It was the right place at the right time for Cuadra, who ran just 6.729 but advanced to the second round.

Coughlin swapped lanes before the race, but Massel was on his game with a strong .017 reaction time. His 6.663 sent Ohio native Coughlin and his 6.656 home early, giving Massel an enjoyable first in the Pro Stock class as well. It's another Elite vs. Elite matchup in the next round, too, as Massel will try to pull off another upset, this time against defending world champ Erica Enders. 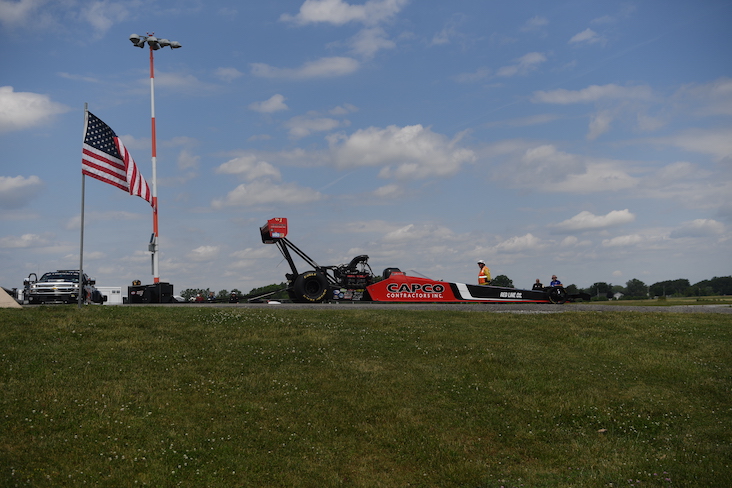 It was a drama-filled second round of Top Fuel, including a quick pop-up shower that paused racing momentarily. It came right before Steve Torrence and Leah Pruett were set to race, and both teams made the daring attempt to head back to their pits for some minor adjustments. Each team told they had to be back in the lanes by the time Top Fuel was done or they would miss their round.

The rain lasted a brief moment longer, and Pruett and Torrence made it in time to be the final pair of the session, and with the quick rain and cloud cover, the track temperature dropped 15 degrees to 107 degrees. That led to an incredible side-by-side run, with Torrence beating Pruett on a holeshot, going 3.781 at 325.45 to Pruett's 3.772 at 326.95. Torrence's .058 reaction time made the difference and he's back in the semifinals against Austin Prock.

"That was exciting," Torrence Racing's Bobby Lagana said. "Credit to (Pruett's crew chief) Todd Okuhara and the NHRA Safety Safari, but that was exciting and that's what you want to see, right?" 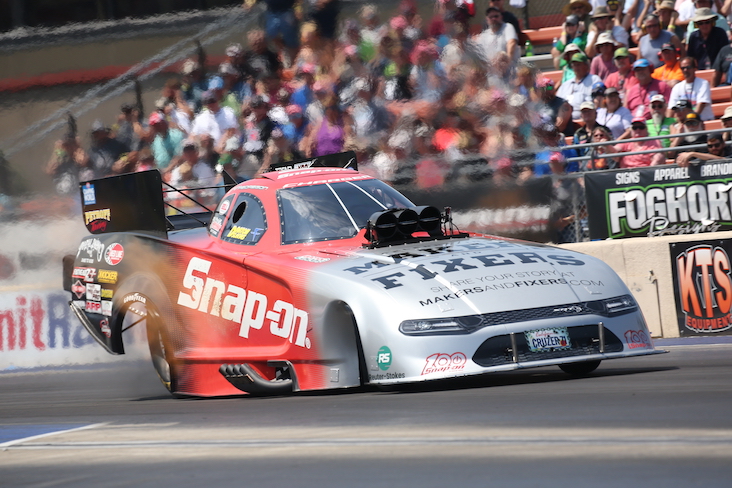 Warmer tracks seem to bring out the best in Cruz Pedregon and that was evident yet again on Sunday in Norwalk, where he sent Robert Hight home in the second round. Coupled with Bob Tasca's victory over John Force -- making the quickest run of the day (3.920) in doing so -- it also snaps JFR's three-race winning streak.

Pedregon now has a grand opportunity to win his first race in more than three years after running 3.959 at 326.24, outrunning Hight in the process. He'll give up lane choice to Alexis DeJoria in the semifinals, but it's another quality pass for Pedregon, who appears intent on making moves this weekend.

"These Force cars are tough. We knew we had to push hard and, fortunately for us, it stuck," crew chief John Collins said. 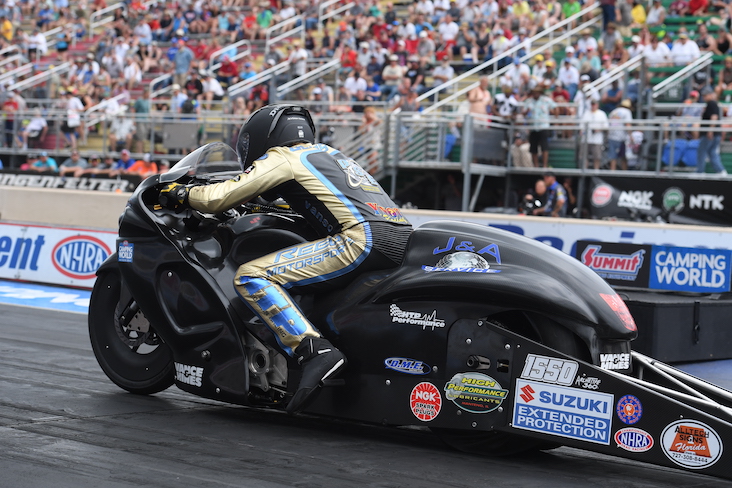 Pro Stock Motorcycle's Joey Gladstone made sure that Andrew Hines' run of success in Norwalk wouldn't continue this weekend, and he continues to fly under the radar with one strong pass after another.

This time, he took out the five-time event winner with an impressive run of 6.856 at 197.65, which relied heavily on a killer .004 reaction time. That gave him the holeshot win over Hines' 6.847, putting Gladstone into the semifinals.

Hines has enjoyed more wins at the Norwalk track than any NHRA competitor, but Gladstone made sure he wouldn't add to it, putting him in a strong position to race for his first career NHRA Camping World Drag Racing Series victory. Gladstone, who has generally ran well this year, is also trying to advance to his first final round of 2021. 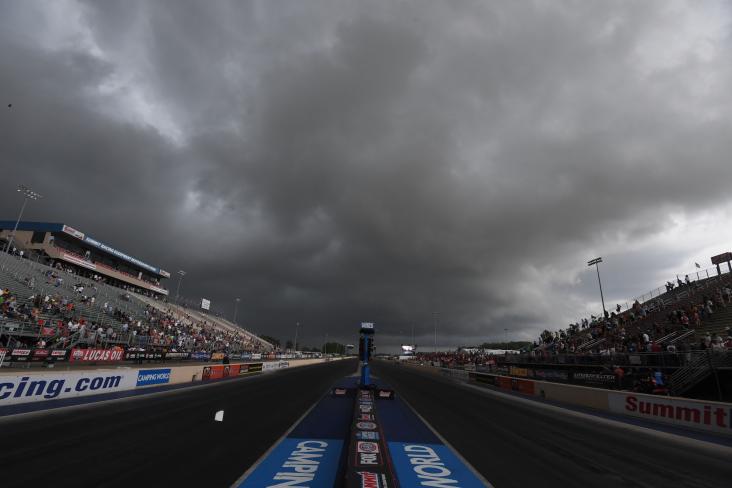 A sudden and strong rain shower drenched the track at Norwalk, putting racing on hold at 2:55 p.m. ET.

Racing is set to resume around 5:45 p.m. and will go right into the semifinals in the nitro categories. 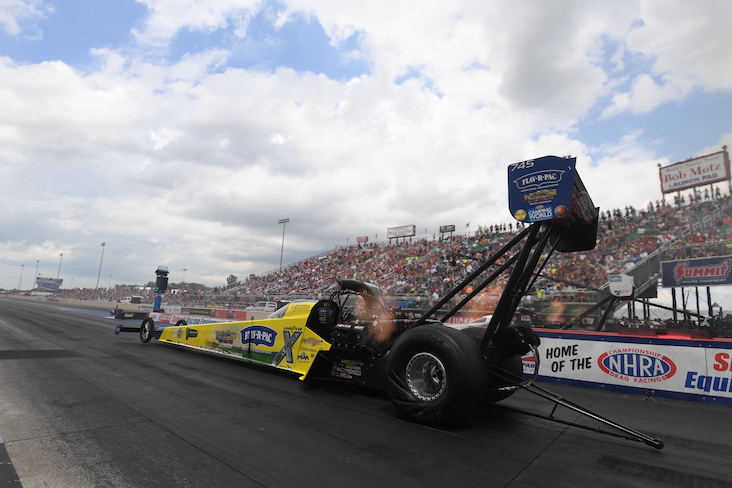 Racing resumed just before 6 p.m. ET at Norwalk and Brittany Force promptly made history at Summit Racing Equipment Motorsports Park. Force became the first driver at Norwalk to run in the 3.60s, wowing those who stuck around with an incredible pass of 3.696 at 326.09 to advance to the final round.

She knocked off Antron Brown in the process and will meet up with the behemoth, Steve Torrence, in the championship round. Torrence went 3.739 to end Austin Prock's storybook weekend, but if Force can repeat that massive run, she may be hard to beat.

"The plan (in the final round) is to repeat that," Force's crew chief David Grubnic said. "It might take more than that, but it should be exciting." 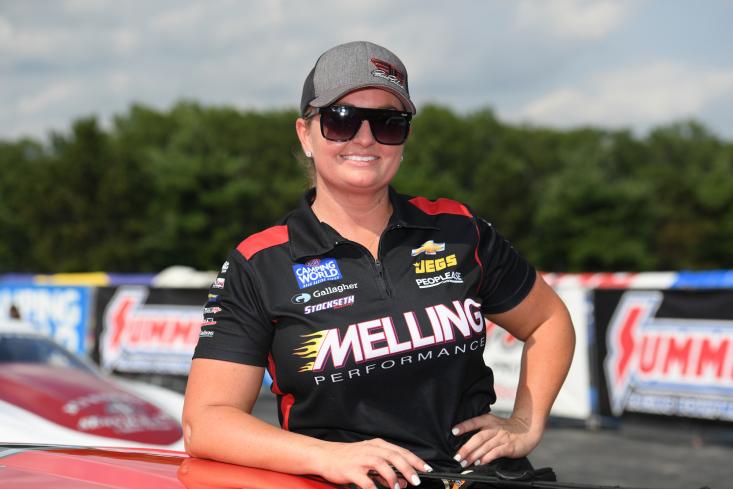 With history on the line, of course it had to be Greg Anderson versus Erica Enders in the Pro Stock final round.

Two of the fiercest rivals in the sport will meet to close out the day in Norwalk, and there's plenty at stake. Anderson is trying to tie Warren Johnson for the most wins in Pro Stock history (97), while Enders, the defending back-to-back world champ, would love nothing more than to spoil that party and hand Elite Motorsports its second straight win.

Anderson has had the quicker car all day -- and all year if we're keeping track -- going 6.627 to beat Matt Hartford in the semifinals. He got denied by Enders' teammate, Aaron Stanfield, in Epping and now Enders will try to do the same. Her car hasn't been spectacular but it's been solid and Enders has done her job on the starting line, going .015 in the semifinals to beat Kyle Koretsky.

She went 6.647 to win and now she'll try to win in Norwalk for the first time in seven years.