Updated throughout the day

TOP FUEL, ROUND ONE

Doug Kalitta, who struggled in qualifying (“We stunk up the place,” according to crew chief Rob Flynn), rebounded to win his opening quad with a 3.72, and he and second-place Josh Hart moved into the semifinals.

Rookie Krista Baldwin, in her first raceday start, got a W as the second-place finisher behind Antron Brown in their quad, finishing ahead of Leah Pruett and Shawn Langdon. Baldwin’s advancement was not without drama as the granddaughter of Top Fuel legend Chris Karamesines lost the top elements of her rear wing in the lights, but was able to bring the car to a safe stop.

Low qualifier Brittany Force, who set both ends of the track record in qualifying, upped her speed record from 33308 to 333.49 in winning her quad ahead of fireballing Clay Millican, Joe Morrison finished third after holeshot artist Justin Ashley red-lighted.

Four-wide dominator Steve Torrence won his quad and will be joined in the semifinals by local favorite Doug Foley, who edged Mike Salinas for second place on a holeshot, 3.791 to 3.781.

Brown is tied for third overall in Top Fuel wins with five-time world champ Joe Amato. Ahead of them are Schumacher 85) and Larry Dixon (62).

Josh Hart didn’t win his quad – he finished second behind Doug Kalitta – but it still counts as a win because he advanced, meaning the Top Fuel rookie and Gatornationals winner has won at least one round in each of his three starts this season. 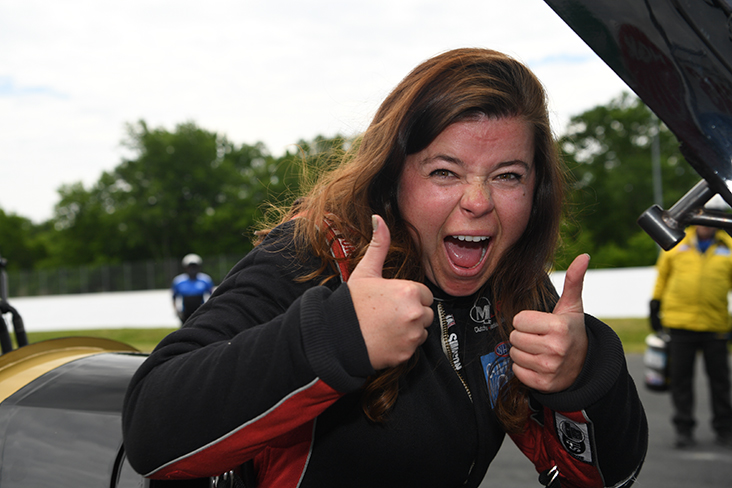 This was Krista Baldwin’s first raceday start after failing to qualify in her Top Fuel debut at the Gatornationals and she made the most of it, beating Leah Pruett and Shawn Langdon to the stripe to advance to the semifinals.

“Oh my god, this is just unbelievable,” said the elated third-generation Top Fuel racer. “Is this happening, right here, right now? I was just going to go up there and try to do my best and make an A to B run, going against these three other drivers I’ve watched all my life. I was honored to just be in that quad. Oh my god. This is crazy, absolutely crazy.”

FUNNY CAR, ROUND ONE 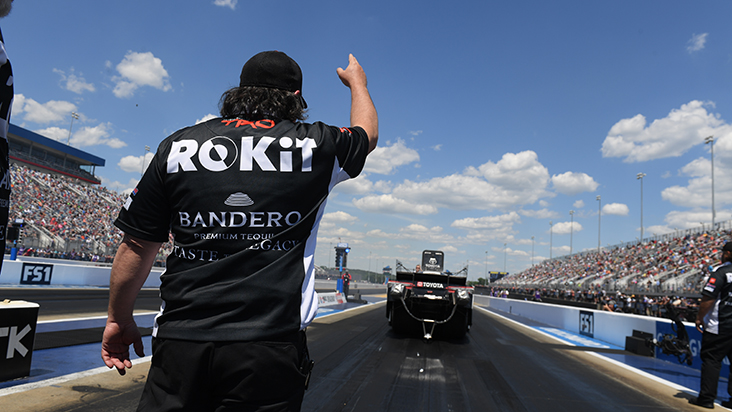 Alexis DeJoria, who ran in the threes of two of her three qualifying runs with the ROKiT Toyota, and Bob Tasca III, who didn’t run in the threes at all, both ran quicker than four seconds to advance out of their quad ahead of Robert Hight and Blake Alexander

Independent hero Mike McIntire Jr. got his first career pass to round to by finishing second behind low qualifier John Force, who pounded out a 3.926 to McIntire’s 4,01. Dave Richards 4.14 and tire-smoking Dale Creasy Jr. both went to the trailer.

The upsets continued in the final quad as Terry Haddock finished ahead of Jim Campbell and tractionless Tim Wilkerson to advance alongside quad winner and two-time four-wide champ J.R. Todd 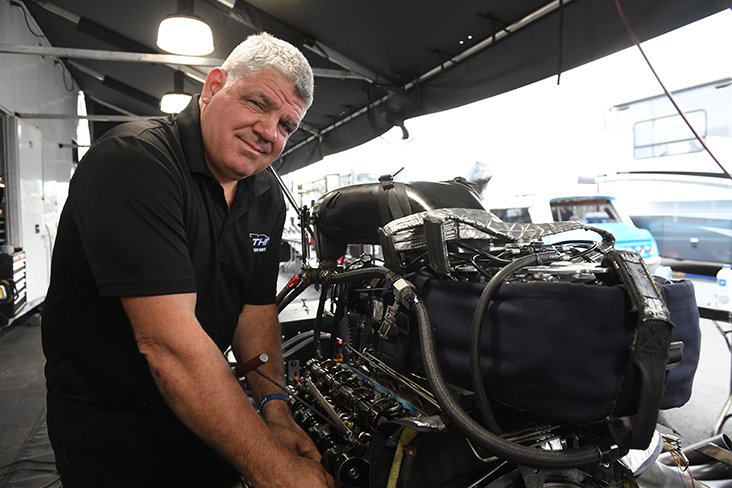 Terry Haddock’s round win was the Texan’s first since the 2017 Dallas event, a span of 63 events without turning on the win light. The long-on-desire but short-on-luck racer didn’t qualify for all of those events but was 0-41 in first rounds in which he did qualify.

PRO STOCK, ROUND ONE

It didn’t take long for things to get wild in Pro Stock, as the first quad featured a double holeshot, as both Chris McGaha and Fernando Cuadra Jr. advanced with holeshot wins over Kyle Koretsky. He made the quickest run of the quad with a 6.534, but struggled off the starting line with a .105 reaction time. Cuadra Jr. won the quad with a stellar .020 reaction time, which was good enough to send him to the next round.

McGaha wasn’t great on the starting line, but better than Koretsky, which meant his 6.568 was enough to advance.

The younger McGaha, Mason, also used a holeshot to send Erica Enders home early, going .019 on the starting line and then 6.568 to upset Enders’ 6.555. The bigger surprise was Aaron Strong winning the quad after struggling in qualifying, going a strong 6.36 at 210.24.

Dallas Glenn made his strongest run of the weekend, going 6.535 at 210.64 to win his quad, while Aaron Stanfield closely followed with a 6.544, continuing his consistent weekend.

Greg Anderson finished off the opening round of eliminations, making the quickest pass of the round with a 6.534 at 210.05. Troy Coughlin advanced to the semifinals by running 6.543. 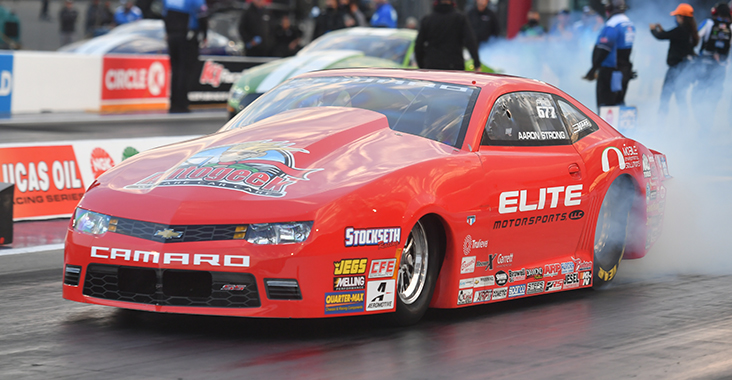 It had been a while for Aaron Strong when it comes to Pro Stock success. He returned to the class at the final race of the 2020 season after sitting out 2017 through 2019, and made his second appearance of 2021 this weekend at zMAX Dragway.

After struggling through qualifying, the weekend became an instant success when he won his opening-round quad, going 6.536. It was the third-quickest run of the round and helped send Elite Motorsports teammate and defending world champ Erica Enders packing as well.

It also gave Strong his first round victory since 2016 when he won the Seattle race, which was completed in Indy. He struggled throughout qualifying, slipping into the No. 14 spot with a 6.583 but certainly found his rhythm to open raceday in one of the biggest surprises of the round.

PRO STOCK MOTORCYCLE, ROUND ONE 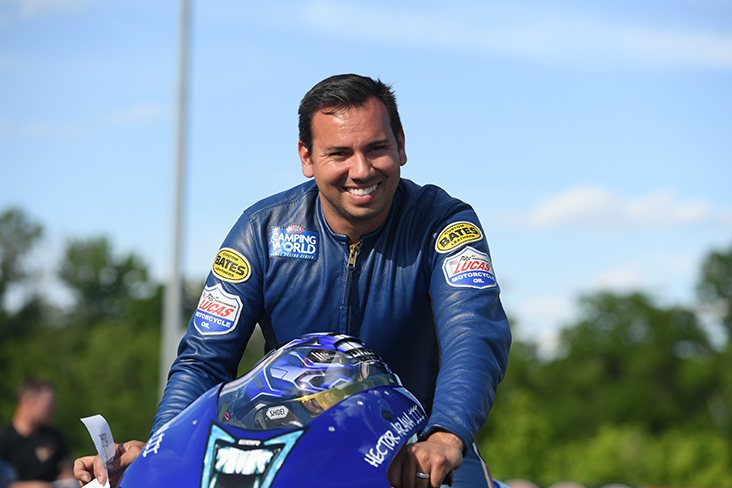 Hector Arana Jr. opened eliminations with a massive speed statement and then proceeded to win the opening quad on a double-holeshot, going 6.771 at a spectacular 203.06. Arana Jr. was .028 off the line and then posted the third-fastest run of all-time in the class on top of it. Joey Gladstone went 6.765 at 200.29 to move on as well, meaning Angelle Sampey’s terrific 6.766 at an eye-opening 202.03 wasn’t enough after a rough .088 on the starting line.

Speaking of major statements, Karen Stoffer had a big one after winning her quad with a 6.756. It gave her a massive career-best and a huge boost of confidence heading into the next round. Jimmy Underdahl was the beneficiary of an engine detonation by No. 1 qualifier Scotty Pollacheck, slipping into the next round with a 6.899. It was Underdahl's first round win since Gainesville in 2019.

The other side of the bracket is impressive, with the slowest advancing time a still-stout 6.783 from Steve Johnson. He finished second to Andrew Hines’ 6.777 in that quad, while Eddie Krawiec’s 6.774 and Matt Smith’s 6.781 in the final quad sent them to the next round as well. 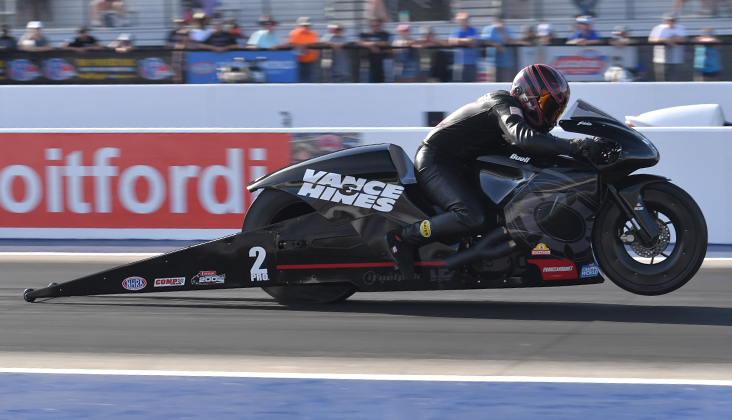 The weekend of speed in Pro Stock Motorcycle continued at zMAX Dragway. After the first round of eliminations, nine of the 10 fastest runs in history were made either on Saturday or Sunday here in Charlotte, with Eddie Krawiec's 203.49 blast leading the way.

Hector Arana Jr. also made a 203-mph run on Sunday in his first-round victory, while Angelle Sampey made her first 202-mph run, just two months after she joined the 200-mph club. She went 202.03 despite being eliminated in the opening round. Krawiec went 202.45 in his opening-round victory, adding to his recent destruction of the record books. Thanks to the last two races dating back to his 2021 debut in Atlanta on his new Vance & Hines/Mission Foods Buell, Krawiec has made seven of the 20 fastest runs in class history.

In all, 14 out of the fastest 20 runs in class history have come in the last two days, and they might not be done yet.

During the first round of E3 Spark Plug Pro Mod eliminations, Jose Gonzalez made contact with the left wall and crossed the centerline. He then contacted the right wall before coming to a stop. Gonzalez exited the car under his own power.

“Right before the 330[-foot] mark I plugged it into second [gear] and I guess an oil line broke and threw some oil under my left rear tire and just threw the car over,” said Gonzalez. “Jerry Bickel built me a good car and all of the safety equipment worked. I feel fine; I don’t even have any bruises.”

Josh Hart won his semifinal quad on a holeshot, beating low qualifier Brittany Force to the stripe, 3.81 to 3.73, as both advanced to the final round. Doug Kalitta had troubles on his run and slowed. Clay Millican had to sit out the round after the safety system misfired in the water box, preventing the team from firing up.

Steve Torrence, winner of five of the last six four-wide events, will get a chance to make it six out of seven after finishing second behind good pal Antron Brown, 3.74 to 3.78, both finishing ahead of Doug Foley and Krista Baldwin. Torrence’s slower e.t. will cost him lane choice and force him out of his favored Lane 4 which Force also has picked.

Cruz Pedregon, who won the 2018 Charlotte four-wide event, will get another shot at a title after finishing second behind Alexis DeJoria in their quad. DeJoria got the win with a 3.929 ahead of Pedregon’s 3.971.

John Force powered his way into the final round with low e.t. of the event, 3.897, and will be joined by another past four-wide winner and world champ, J.R. Todd, who finished second with a 3.97. Mike McIntire’s great weekend ended with a third-finishing 4.02. Terry Haddock was shut off on the line after the burnout. 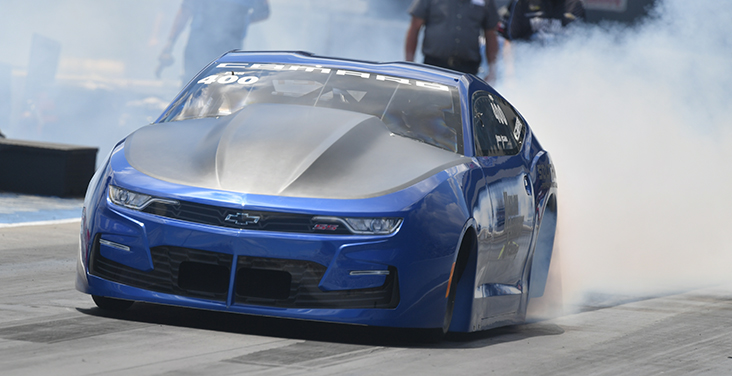 One thing is certain: we will have a first-time Pro Stock winner in Charlotte.

Fernando Cuadra Jr. and Troy Coughlin Jr. clinched that, as Coughlin won on a holeshot and Cuadra advanced to the finals on a double-holeshot, sending No. 1 qualifier Greg Anderson home without a four-wide win in 2021.

“We have a driver,” Fernando Cuadra Sr. said of his son. “He is rolling, cutting the lights, and is just a heck of a driver.”

It’s also safe to say Mason McGaha loves four-wide racing. The rising star is back in the final quad at his second straight four-wide race, advancing on a double-holeshot in the semifinals. Dallas Glenn impressed as the quad winner and will have lane choice in the final round with his run of 6.547 at 209.52.

Glenn continues to impress on the starting line, going .026 there, but McGaha stole the show there, ripping off a .016 to slip past both Stanfield and Aaron Strong. They both went in the 6.55s, but McGaha had enough cushion, making a run of 6.568 to advance to his second final.

It will be the first career final round for both Glenn and Cuadra Jr. Coughlin Jr. will try to come through for the first time in his third appearance in the finals. 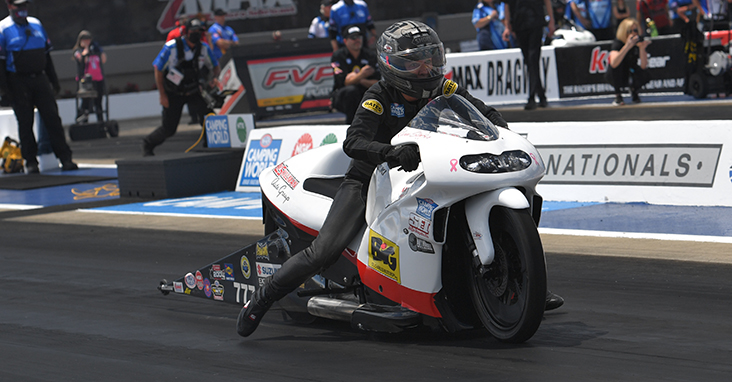 A near-perfect .003 reaction time sent Karen Stoffer to her first final round since the fall race at zMAX Dragway in 2019, continuing her solid weekend. She won her semifinal quad with a 6.791 at 197.68, with Joey Gladstone following right behind with a 6.791 as well. That gives Gladstone a chance to win his first race in Pro Stock Motorcycle and he’s making just his second final-round appearance.

Based on what happened in the first quad of the semifinal round, both will have their work cut out for them. Steve Johnson, who is riding the quickest Suzuki in class history thanks to his performance this weekend, continues to impress in beating a trio of heavyweights with a run of 6.760 at 197.80. He’s made four straight runs in the 6.70s, inching closer to his first victory since Gainesville in 2014.

Meanwhile, Matt Smith has a chance to extend his points lead after going 6.767 at 202.00. Both Smith and Johnson cruised as Eddie Krawiec and Andrew Hines struggled during their runs. Smith can also hand Matt Smith Racing their third victory in four races this season.