News and notes during final eliminations at Bandimere Speedway. This will be updated throughout the remainder of the event.
18 Jul 2021
Kevin McKenna, NHRA National Dragster Senior Editor
Race coverage

In case you missed it last night, the final qualifying session for racers in the E3 Spark Plugs NHRA Pro Mod Drag Racing Series presented by J&A Service featured a lot of drama, perhaps more than it should have. Defending series champion Stevie Jackson recorded Bandimere Speedway’s first five-second run in his Bahrain1 Camaro, but all eyes were on J.R. Gray, who went for a wild ride behind the wheel of Mike Janis’ supercharged entry. Gray came into the session as the ninth-quickest qualifier and was attempting to make his first full run when he lost control and made contact with the right-side retaining wall. Gray wasn’t hurt in the fiery crash and exited the car under his own power. As a result, championship contender Jose Gonzalez will get a bye run in today’s opening round.

Will there be a Western Swing sweep this year?

The odds don’t favor a Western Swing sweep, which this year includes the events in Denver, Sonoma, and Pomona, but you never know. In more than 30 years, the tri-fecta has been accomplished just eight times by Joe Amato (1991), John Force (1994), Cory McClenathan (1997), Larry Dixon (2003), Greg Anderson (2004), Tony Schumacher (2008), and Antron Brown (2009). Also, Sportsman star Dan Fletcher swept all three events in the Super Stock class in 1994, launching his career as a touring NHRA pro.

The fact that it’s been more than a decade since the last sweep is not surprising because each of the three venues features drastically different atmospheric and track conditions, requiring a myriad of adjustments by crew chiefs. It’s possible that the addition of the Pomona event this year, in place of the traditional stop in Seattle, could make it a bit easier, but not by much.

This year, the Pro Stock Motorcycle class will be contested at all three events, providing the first opportunity for one of NHRA’s two-wheel stars to join the exclusive fraternity.

A couple of the prime candidates to sweep this year’s swing would include Top Fuel points leader Steve Torrence, who wins everywhere, and Matt Smith, whose Denso Buell has been the dominant Pro Stock Motorcycle this season. 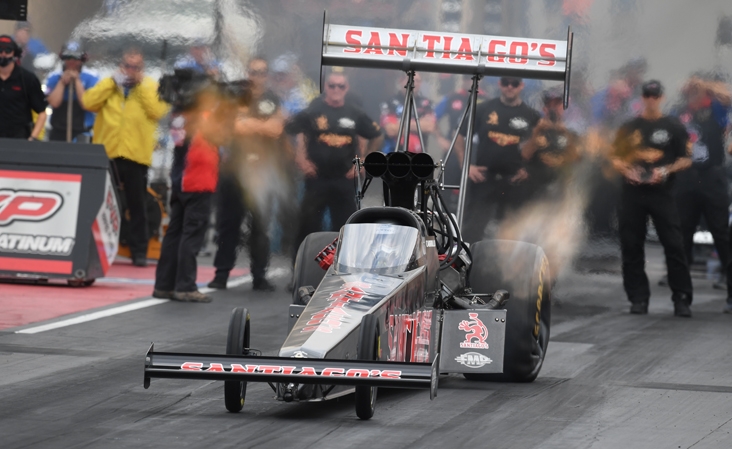 The Dodge//SRT Mile-High NHRA Nationals presented by Pennzoil has a long history of upset wins, and it didn’t take long for the first one to occur at this year’s event when Greg Carrillo took out three-time world champ Antron Brown in the first round of Top Fuel. On second thought, perhaps it wasn’t as big of an upset as it might have seemed at first glance. Carrillo, who came to Top Fuel from the Super Comp ranks, out-qualified Brown’s Matco Tools dragster and had lane choice. Carrillo sealed the win with a competitive 3.860, and he will also have lane choice in his round-two race against Mike Salinas.

Carrillo also benefits from years of experience with crew chiefs Aaron Brooks and Glenn Mikres at the helm of his Arizona-based entry.

“Let me tell you, Antron Brown is a tough character,” said Carrillo. “My team has some fight in them. On the front of our car, it says, ‘Never fear, Underdog is here.’ Aaron Brooks and Glenn Mikres and the rest of my team stayed up late to get ready. I’m just the weak link. I get to sit in the front row and watch them get the job done. We’re going to keep it rolling.”

In his Top Fuel career, Carrillo has three round-wins and two of them have come against Brown. The other came against eight-time world champion Tony Schumacher. 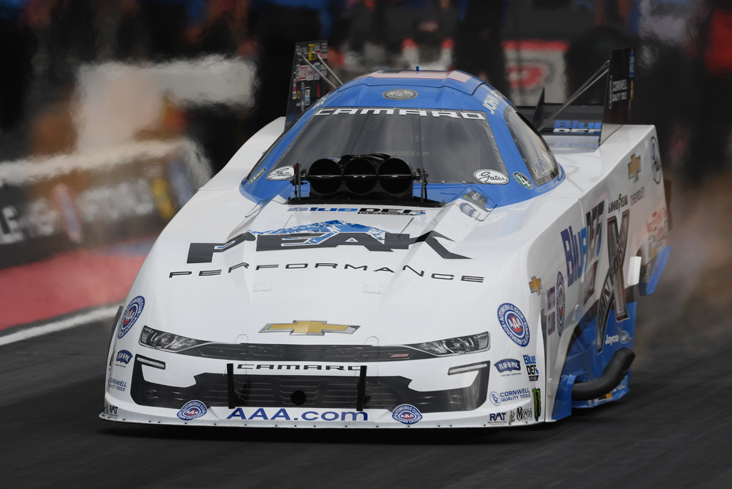 For Denver fans, it was a marquee match-up, but within the John Force Racing camp, it was a race that both John Force and teammate Robert Hight were dreading since qualifying was completed last night. Both Force and Hight are legit contenders for the NHRA Camping World Drag Racing Series Funny Car title, but it was inevitable that one of them took a round-one loss after they qualified on the same side of the ladder.

“It sucks racing a teammate; you’re supposed to do that at end of the day,” Hood said. “We had to get after it because you know Jimmy [Prock, Hight’s crew chief] is going to do the same.”

For those into numerology, Force is competing in his 797th career event, by far the most for any NHRA pro. He’s also got 1,987 round-wins following his victory over Hight, so 2,000 is on the horizon. Much like Wayne Gretzky’s NHL goals record or Cy Young’s record for MLB  wins, those are records that likely will never be bettered. 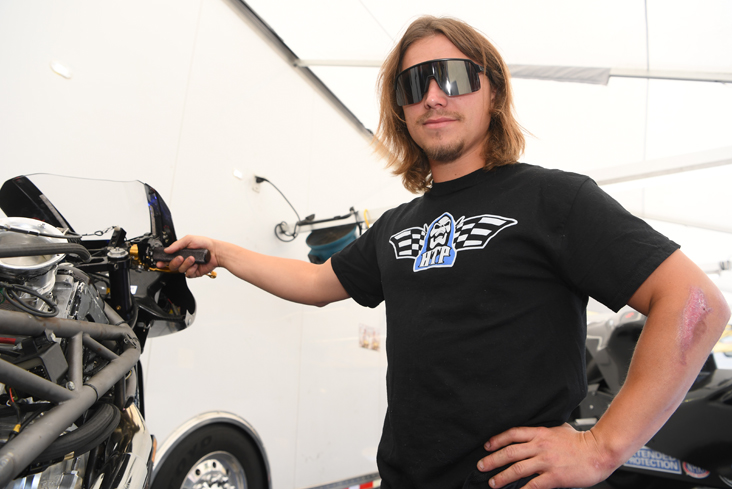 Joey Gladstone is almost a lock to win a Pro Stock Motorcycle race, but it won’t be the Mile-High Nationals after the versatile Pro fouled out in round one. Gladstone had every reason to be frustrated since his 7.143 would have easily covered opponent Karen Stoffer’s 7.226 effort.

The loss aside, Gladstone is just happy to be racing after suffering multiple injuries in a testing accident earlier this year. He suffered several broken bones and some severe road rash that forced him to miss the Las Vegas race. Gladstone returned in Atlanta and qualified No. 2, the best start of his career. He also rode his Reed Motorsports Suzuki to back-to-back semifinals in Charlotte and Norwalk. Since his accident, Gladstone has moved from 15th to 6th in the NHRA Camping World Pro Stock Motorcycle standings.

Gladstone is also able to cheer on his teammate, Cory Reed, who put together a solid run with a 7.213 in his upset win over reigning U.S. Nationals champion Scotty Pollacheck. 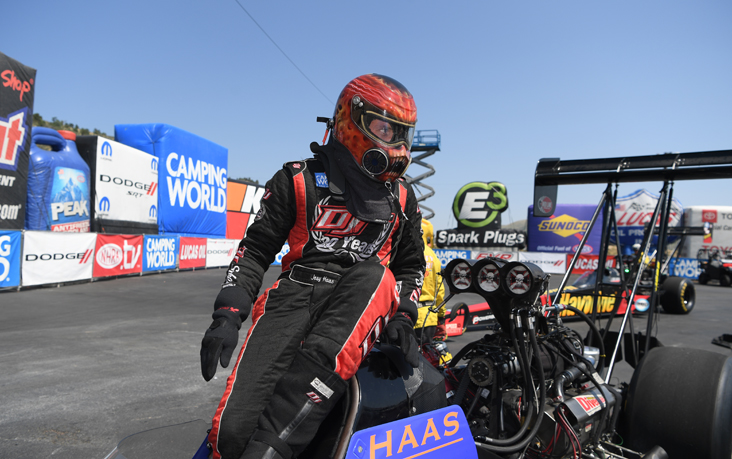 Making his first appearance of the 2021 season, Joey Haas thought he was having his best day as an NHRA Pro when he logged a round-one win against rookie Alex Laughlin. Turns out, that was only the beginning. Haas punched his ticket to the semifinals after opponent Leah Pruett developed an oil leak on the starting line. Granted a single run, Haas idled down the track in order to give the Totten Motorsports team ample time to service the car before the semifinals.

“It’s indescribable," said Haas. “We’re a small team. We get here on a limited budget. It’s amazing to get here. If we had a huge sponsorship, I would have taken the green light and run it to the finish line. We went a 3.98 on that last run, and we didn’t take the heads off of it. We put a clutch in it, turned around, and came right back up here. I couldn’t do this without Terry Totten giving me the opportunity to drive and my crew; they come from everywhere. They pay their own way to get here.” 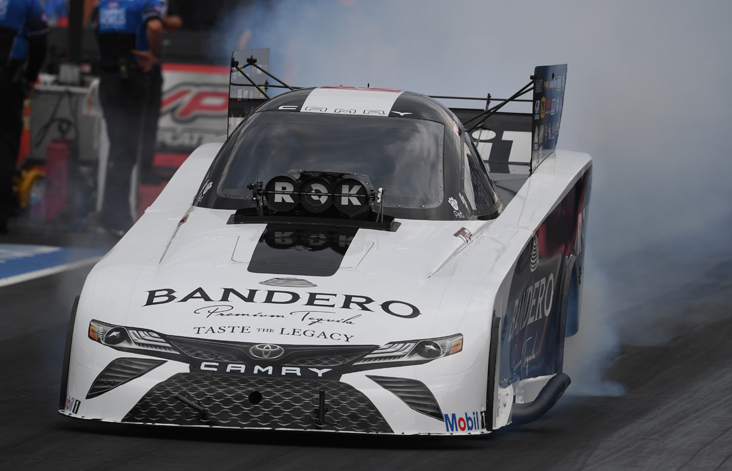 Eight races into the 2021 season and we’re already guaranteed to have a sixth different winner in the Funny Car class. That was a given after the quarterfinal round, where Matt Hagan, Ron Capps, Alexis DeJoria, and Tim Wilkerson all advanced. None of them have won a race this year.

Hagan, the low qualifier, made the best run of the round with a 4.019, and he’ll have lane choice when he faces teammate Ron Capps in the semifinals. Capps got there after beating John Force in a battle of two of the class’ most experienced drivers. The DSR cars ran the table last season but have been shut out of the winner’s circle so far this season. There’s a good chance they’ll break that winless skein today.

Wilkerson advanced after Paul Lee fouled out, and he’ll be paired with DeJoria, who powered to a 4.070 in her win against incoming points leader Bob Tasca III, who got loose and shut off after drifting close to the retaining wall. Wilkerson’s last win came at the 2016 Charlotte four-wide race, and DeJoria last visited the winner’s circle at the 2017 Brainerd race before she took a two-year sabbatical. 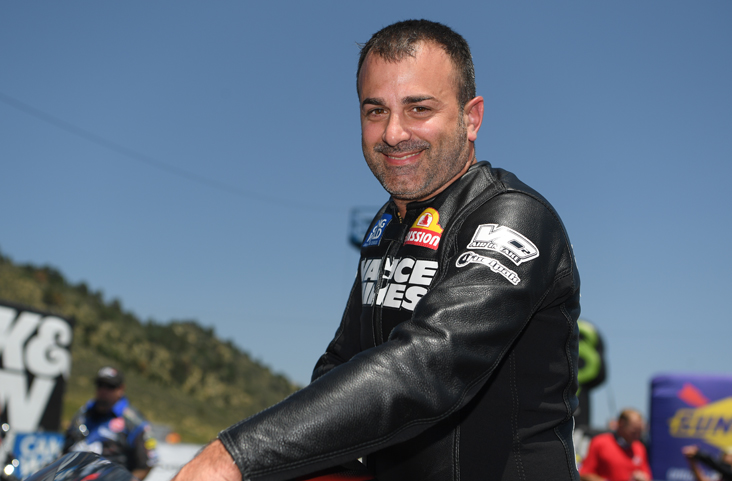 Holeshots were the order of the day in the quarterfinals of Pro Stock Motorcycle with two of the four rounds decided on the starting line. Andrew Hines authored the first starting-line gate job when he defeated teammate Angelle Sampey, 7.239 to 7.224. Hines was sharp with a .014 light, and Sampey missed it slightly with a .066.

The second holeshot was far more impressive and has potentially bigger implications in the points after Eddie Krawiec leveled Steve Johnson’s Suzuki. Krawiec was almost perfect with a .002 light and powered to a 7.166 to reach the semifinals, and Johnson was six-hundredths behind at the start and couldn’t make it up despite a 7.127, one of the quickest runs ever recorded at Bandimere Speedway.

The semifinals shape up with Hines taking on Hines, and Krawiec will be paired with Angie Smith. 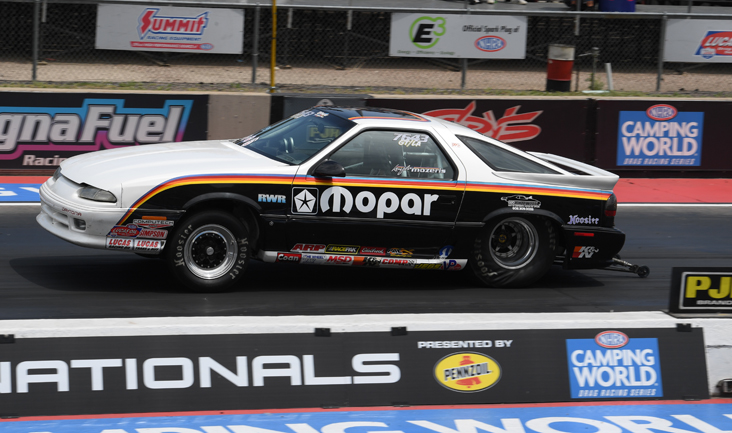 TOP FUEL results:
Steve Torrence keeps rolling but Joey Haas has his day in the sun