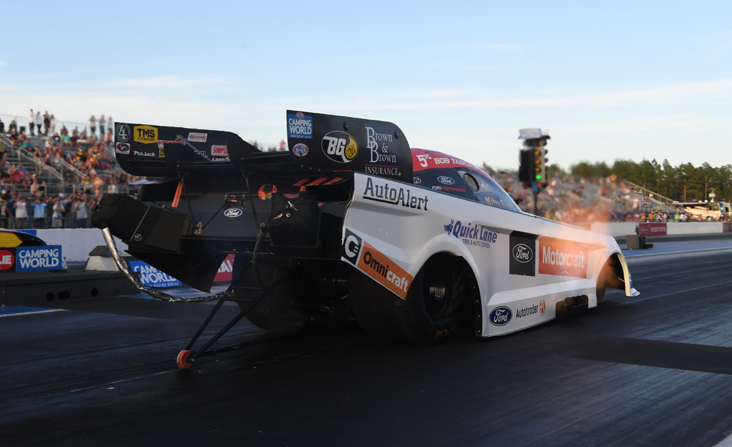 It didn’t take long to establish an early favorite for the Funny Car race of the year after Bob Tasca III defeated reigning Funny Car world champion Matt Hagan in round one. Hagan, the No. 8 qualifier, left first by .002-second but Tasca was .002-second quicker down track and turned on the win light with a 3.920 to 3.922. The final margin of victory at the finish line was just .0001-second, or about one inch. Hagan had previously been 18-11 against Tasca in 29 head-to-head meetings. A round later, Tasca personally ended the Don Schumacher Racing Funny Car win streak at 14 races when he also defeated Ron Capps. The DSR team, which featured four cars last season, had won every race in 2020 and the last three of the 2019 season. 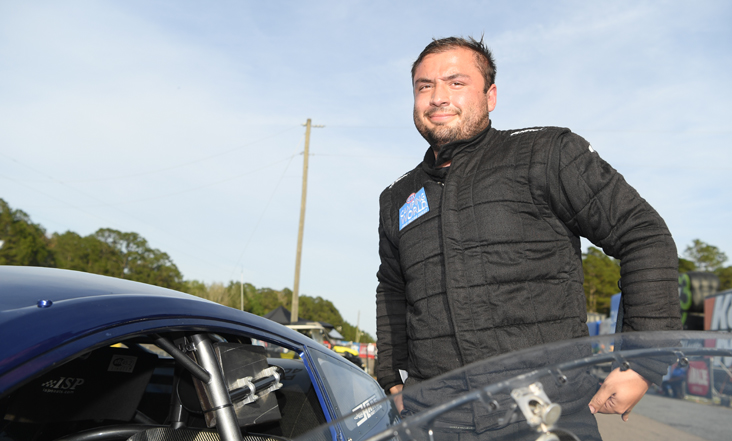 The opening round of the Gatornationals also featured what may ultimately be the upset of the year after Fernando Cuadra Jr. beat four-time and reigning Pro Stock champion Erica Enders. When it comes to holeshots, Enders doles out far more punishment than she takes. In fact, with the retirement of Jeg Coughlin Jr., she is NHRA’s active holeshot leader but this time, Cuadra established an early lead, .021 to .040, and held on for the win, 6.564 to a quicker 6.549. Cuadra, who is now using engines from Frank Iaconio, is riding a hot streak after winning the Doorslammer Nationals event in Orlando last weekend. 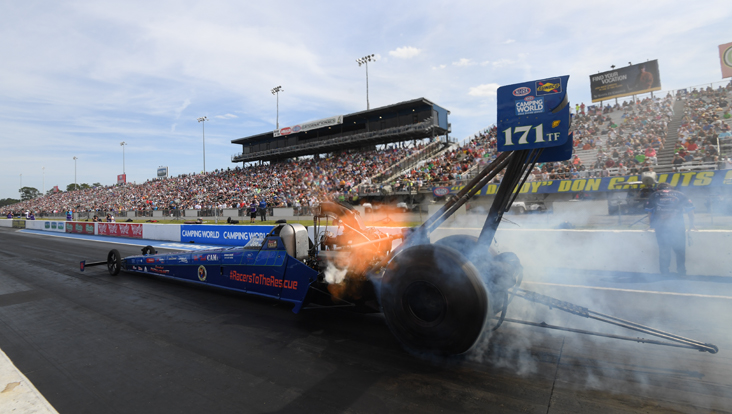 Almost everyone in the U.S. got less sleep than normal on Saturday night due to the start of Daylight Savings Time, which moved the clocks forward by one hour. And then there is Joe Morrison and his Leverich Racing crew, who got even less rest after they stayed at Gainesville Raceway past 3 a.m. preparing their car for Sunday’s final eliminations. Morrison qualified on the bump with a 4.294, holding off Krista Baldwin and Todd Paton. Morrison made it to the starting line for his round one race against Steve Torrence but wasn’t able to begin the season with a world-class upset. 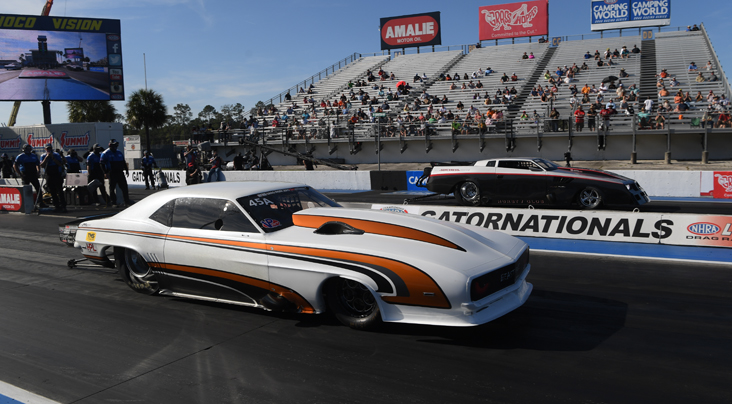 The Street Car Shootout match race between Tom Bailey’s Camaro and Rod Tschiggfrie’s Sorceress Olds Cutlass, lived up to its advance billing after both cars ran in the five-second zone during their preliminary runs. Bailey, the star of Hot Rod Magazine’s annual Drag Week event, ran a 5.97 while Tschiggfrie’s Olds broke into the fives for the first time with a 5.99. Tschiggfrie had previously run over 260-mph during the Street Car SuperNationals event in Las Vegas two years ago. Unfortunately, the best-of-three match came to a pre-mature end when Bailey’s car was heavily damaged in a top-end fire on Saturday afternoon. Bailey climbed from the blaze unscathed, but his car will likely require a lot of work before returning to action. 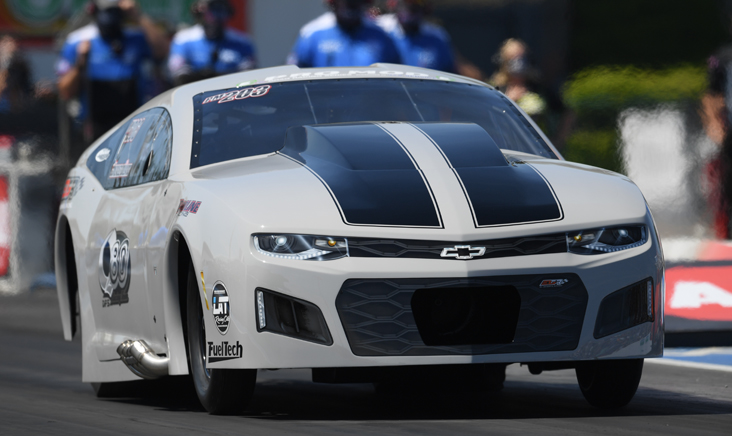 The elapsed time record in Pro Mod traded hand several times this weekend. Coming into the Amalie Gatornationals, the record was a 5.643 set by “Stevie Fast” Jackson at the 2019 Amalie Gatornationals. During Saturday evening’s wild final qualifying session, Canadian Justin Bond drove his ProCharger-equipped Bahrain1 Camaro to a 5.638 to re-set the record. Bond didn’t have long to celebrate since Pro Mod cars returned to the track for their first round of eliminations on Sunday morning where Jose Gonzalez drove his new Q80 Camaro to a 5.621 in his win over Jericho Balduf to take the record, albeit unofficially. Gonzalez also uses the ProCharger engine combination offered by ProLine Racing. 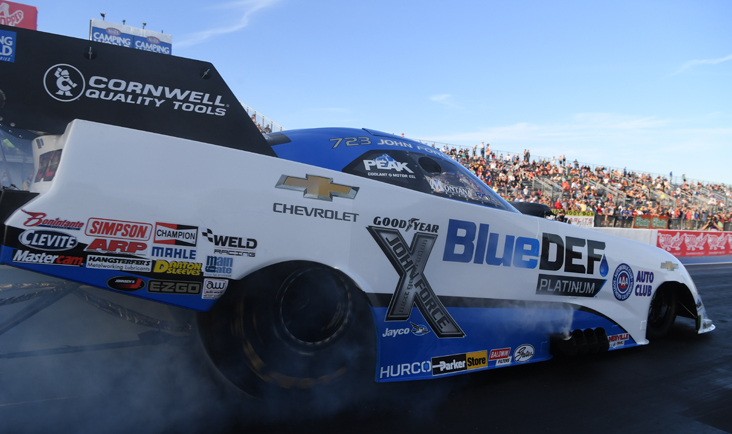 Since he ran just two events last year, 16-time world champion John Force did not finish among the Top 10 drivers in the Funny Car class so his Blue Def Camaro now features his longtime NHRA permanent number, which is 723. For historians, the last time Force did not finish in the Top 10 was 1984, when he finished No. 13. Teammate Robert Hight has reverted to his old number, 7000, while Brittany Force’s Monster Energy Top Fuel dragster currently carries her number, which is 745. 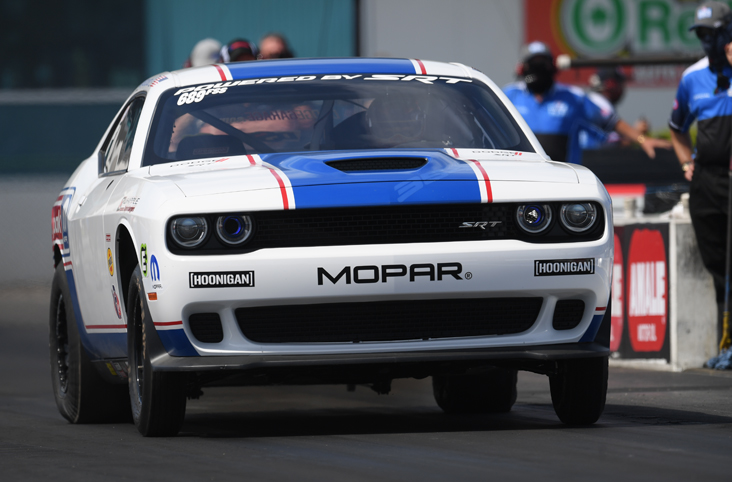 On the subject of numbers, sharp-eyed observers may have noticed that Leah Pruett has replaced the 777 number on her new fourth-generation 20201 Dodge Challenger DragPak Factory Stock entry with the No.  689. No, the 2018 NHRA Factory Stock champion didn’t move to the Pacific Northwest. She made the change to honor her late father, Ron Pruett, who used that number during his long and successful career as a land speed racer on the Bonneville Salt Flats and El Mirage speed course. 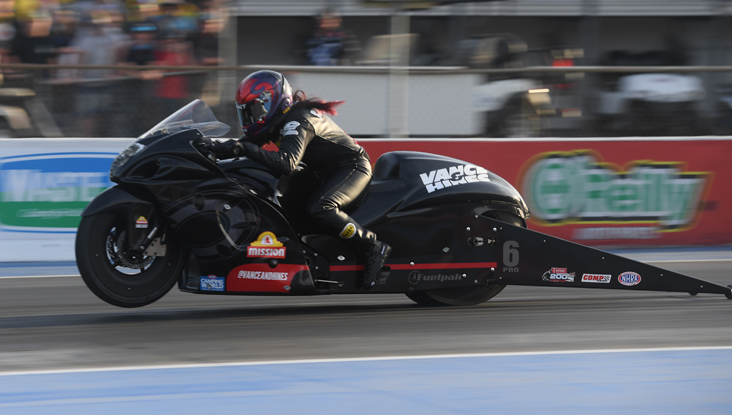 The Denso 200 Mph Pro Stock Motorcycle Club welcomed a new member after three-time world champion Angelle Sampey rode her new Vance & Hines/Mission Foods Suzuki to a 200.00-mph speed during Saturday’s first professional qualifying session. Sampey joined charter member Hector Arana Jr., who opened the club in Gainesville in 2019. The Club also includes Matt and Angie Smith, Eddie Krawiec, and Scotty Pollacheck. Sampey is the first rider to enter the club on a Suzuki four-cylinder motorcycle “I did not expect this, but we were on a mission,” said Sampey.  “This bike is amazing. We struggled for a couple of days, but we got it straightened out. I have to give a shout-out to everyone at Vance & Hines. This is something they wanted. [Crew chiefs] Andrew Hines and Eddie Krawiec did this. Not me. I’m just the lucky girl who gets to ride the bike.”

Speaking of Pro Stock Motorcycles, the 2021 Amalie Motor Oil Gatornationals marked the first time since the 1995 NHRA Finals in Pomona that there wasn’t a member of the Hines family in the Pro Stock Motorcycle field. Matt Hines joined the class in 1996 and went on to win 30 races and three championships. Younger brother, Andrew joined the class in 2003 and has not missed a start since then. Vance & Hines teammates Andrew Hines and Eddie Krawiec have spent this weekend in Gainesville tuning Angelle Sampey’s new V&H/Mission Foods Suzuki to the top qualifying spot and a 200-mph speed. Hines and Krawiec are expected to rejoin the Camping World NHRA tour later this season.