Hines has simply found ways to win in Norwalk. His five Summit Racing Equipment NHRA Nationals wins at the facility are not only the most in Pro Stock Motorcycle, but it’s the most for any NHRA Camping World Drag Racing Series competitor.
26 Jun 2021
Josh Hachat
Feature

It’s been hot, cool, rainy, sunny, and cloudy, and Hines has simply found ways to win in Norwalk. His five wins at the facility are not only the most in Pro Stock Motorcycle, but it’s the most for any NHRA Camping World Drag Racing Series competitor by a large margin. He won in 2019 and has started this weekend strong, currently qualified third on his Vance & Hines Buell after a run of 6.855-seconds at 200.68 mph on Friday at the Summit Racing Equipment NHRA Nationals.

It’s been two years since anyone raced in Norwalk, but Hines has simply picked up where he left off here, which isn’t surprising considering his success at the fan-favorite track.

“We’ve obviously had a lot of success in the past and taken home a few ice cream scoopers over the years, so for some reason we’ve found our way to the winner’s circle a few times here,” Hines said. “We maybe don’t have the quickest bike, but we seem to get them down the track and perform well here. It just happens to fall in a place where we’re getting in the swing of things and getting a handle on the changes we’ve made in the off-season.”

Hines isn’t quite in mid-season form yet, in part because he only has two races under his belt in 2021 coming into Norwalk. The team didn’t debut the new bikes for Hines and Krawiec until Atlanta, and the winningest rider in class history wasn’t pleased with his performance in Charlotte.

The speed numbers were there, but the bike wasn’t as quick as Hines wanted. Luckily, the team had a six-week break between Charlotte and Norwalk and the team went to work. Based on what has already happened at the Summit Racing Equipment NHRA Nationals, it’s safe to say the team has made some strides. 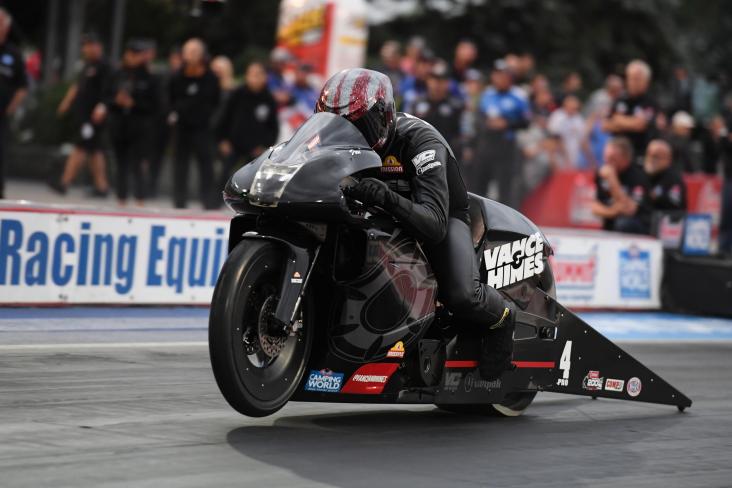 “We went testing earlier this week and we both ran really well, and we’re thinking we come in and perform better than we did in Charlotte,” Hines said. "We’re trying some new things in the engines and trying to figure out what we can do. We tested all three bikes this week and they all ran really well. We’re going to see what we’ve got.”

What Hines has is a bike capable of winning for the sixth time in Norwalk and the first on a Buell. That would be a feather in his cap, even as he continues to adjust to the new body and the changes he’s had to make as a rider.

“The biggest thing is we’ve wrapped these new Buell bodies onto our bike and the seating position, we’re sitting about two inches farther forward than we ever had and I think it’s throwing our tuneup a little bit of a curveball,” Hines said. “We want to get out there and go fast. We went through everything with a fine-tooth comb trying to move the E.T. number. It would be nice to see some forward progress in our E.T.s coming out of this event.”