Funny Car veteran Gary Densham is just two races away from reaching 500 career Funny Car starts, but he'll have to wait until later this year to reach the milestone as son Steven saddles up, beginning next week in Las Vegas.
13 Apr 2021
Josh Hachat
Feature

Funny Car’s longest-tenured driver still has one more major milestone to reach in his terrific career, and Gary Densham has his hopes set on it happening in 2021.

With five decades of racing under his belt, Densham is just two races away from reaching 500 career Funny Car starts, an accomplishment he hopes can take place at the Auto Club NHRA Finals in Pomona to close out the 2021 season.

It’s one of two races he appears set to compete in, with the other tentatively coming in Brainerd. His son, Steven, who made his Funny Car debut at the end of the 2019 campaign, will be in the seat for the other four to five races this year, starting at next weekend’s Denso Spark Plugs NHRA Four-Wide Nationals at The Strip at Las Vegas Motor Speedway.

That’s the immediate focus for the family, but the senior Densham also admitted that the 500th start is on his mind. 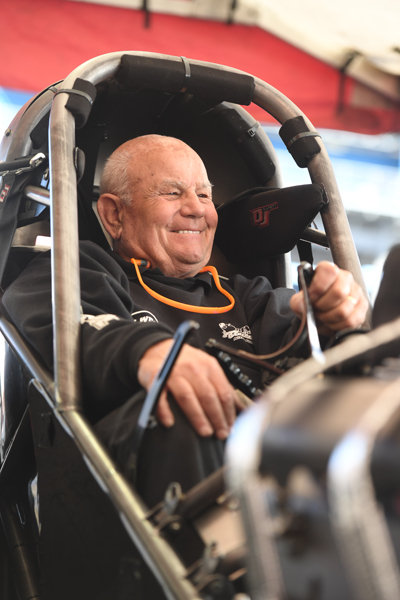 “I still love doing it, and I’ve run 498 NHRA national events, and I would kind of like to run 500,” he said. “But I’m so excited about Steven driving the car, I can’t see straight.

“You look at that statistic of 500 races, and I’ve been driving a Funny Car for 50 years, and nobody has had more fun than me. I’ve met so many friends, it’s been incredible.”

Densham wouldn’t call it a retirement tour, and if the 500th start does come in Pomona later this year, it doesn’t mean it’s his last race behind the wheel, either.

But it’s important to the longtime veteran that the milestone does come at Auto Club Raceway at Pomona, a track that has meant a great deal to him over the years.

The love of the sport also remains strong for Densham, who remains tuned in to all the happenings of drag racing. The excitement in just discussing racing is noticeable in his voice, and it’s a passion that has never left.

“I’ve always loved racing and, once again, it goes back to the people I’ve met,” Densham said. “A lot of things have changed in the sport, but the fans and the competitors keep it great. It’s wonderful, I still love it, and I’m so excited to get out there.“

He’s found new joy celebrating on the starting line watching his son compete, something he will get to do in Vegas. 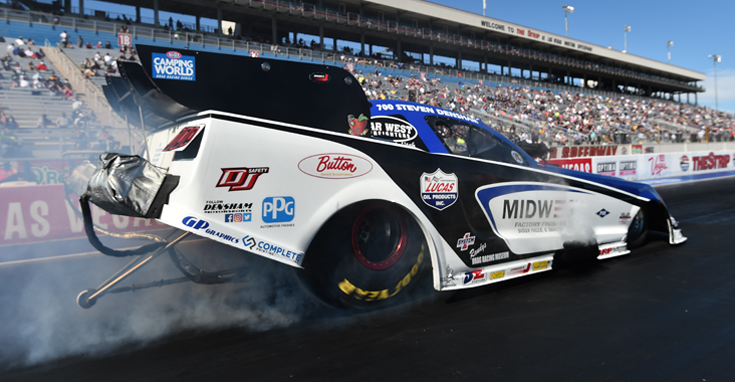 It will be Steven’s first four-wide race in his Funny Car career, but the elder Densham sees plenty of potential in his son.

“We try to improve our program a little bit every year and get a little better, and Steven gives us a better chance of winning,” the proud father said. “I think he’s got a really good presence in the car, and he’s done well. He catches on quickly, respects it, and knows the car has a lot of power. I’ve been really happy, and I think he’ll have a lot of fun at the four-wide in Vegas.”

Steven still only has less than 10 runs in official NHRA Funny Car competition, racing the two final races in 2019, but the goal is for him to race at least four times this year.

As for dad, he’ll continue to work on the tune-up and on the car when he’s not driving, fully satisfied watching his son blast down the track.

“I started to realize how wonderful it is to celebrate with the six or seven guys on the starting line,” Densham said. “I didn’t realize I would like it that much until I did it. It’s something I’ve really enjoyed, and trying to get caught up with the new technology has been kind of fun.”