Torrence went in first and actually double-bulbed Force — unintentionally, he said, in the post-race interview. His .058 reaction time to Force’s .078 was the difference, as his run of 3.736-seconds at 313.88 mph was just enough to keep Force’s 3.730 at 326.24 from crossing the finish line first.

It gave Torrence his fourth victory this year in his 11,000-horsepower Capco Contractors dragster, and also the third in his past four races in 2021. After battling a pair of rain delays that totaled more than four hours in length, Torrence, the points leader and three-time defending world champ, again rose to the occasion when it counted, continuing what appears to be a fourth straight dominating season.

“These wins really mean a lot,” said Torrence, who now has 44 career wins. “I had to get out and apologize to Brittany because I did not mean to go up there and double-bulb (her). I’ve been known to do some creative stuff on the tree, but I wasn’t trying to do that today. You just have to stay focused and be ready.

“Those Capco boys, they’ve done a great job and I’m so proud and honored to be in the position I’m in. To be part of this, it’s humbling. This car is unreal right now, and (crew chiefs) Bobby Lagana and Richard Hogan, those guys are awesome.” 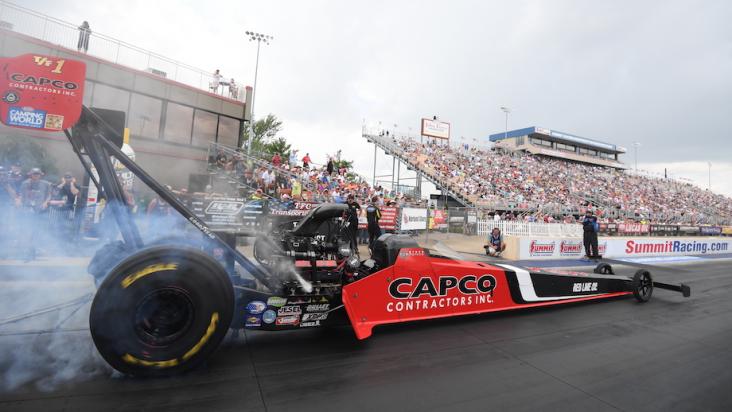 Torrence reached the final round for the fifth time in seven races in 2021 and the 67th in his career. To get there, the Texan beat Shawn Langdon, Leah Pruett in a wild second-round that was momentarily interrupted by rain just before they ran and then Austin Prock in the semifinals. Prock was the feel-good story of the weekend, filling in on Saturday and then on raceday with Millican suffering from an ear infection.

But Torrence had too much for Prock and the Parts Plus team, going 3.739 to advance to the finals.

After back-to-back first-round losses, Force made a big move on Sunday, advancing to her second final round of the season and 25th in her career by defeating Mike Bucher, Justin Ashley and Antron Brown. In the thrilling semifinal matchup against Brown, Force put together the first run in the 3.60s at Summit Racing Equipment Motorsports Park, reeling off a spectacular 3.696 at 326.09 to set the track record and move to the championship round.

She turned in another great performance, but Torrence made the most of his starting-line advantage to pick up his third victory at Norwalk. He stretched an already-commanding points lead, while Force leaves Norwalk fourth in points.