The rain came, but this time the race track won. While rain wiped out an afternoon of action on Friday at Summit Racing Equipment Motorsports Park, it didn’t end the day and when the stars in the NHRA Camping World Drag Racing Series got the chance to perform, they made sure to impress the strong crowd that stuck around in Norwalk.

After racing didn’t take place at the track a year ago, they were eager to see NHRA’s return at the Summit Racing Equipment NHRA Nationals and things got off to a fantastic start on Friday night during the opening qualifying session in Top Fuel, Funny Car, Pro Stock, and Pro Stock Motorcycle.

Steve Torrence capped off a thrilling Top Fuel session by going to the top with a run of 3.705-seconds at 324.83 mph in his Capco Contractors dragster. He was forced to step up after watching Brittany Force light up the scoreboards with a pass of 3.722 at 323.74, while his dad, Billy, who won the most recent event in Epping, delivered a 3.724 at 325.37. S. Torrence’s team saw that, crew chief Richard Hogan turned a few screws and the three-time defending world champ and points leader nearly dipped into a 3.60s on what turned into a beautiful evening in Norwalk.

“We went up there with everything set of going for the top or going home,” S. Torrence said. “(B. Torrence) went 3.72 and that gave us all the liberty to stand on it. That’s the benefit of having two cars and we were able to push for the fence on our run.”

Should it hold, Torrence would take the No. 1 spot for the third time this season. Mike Salinas and Antron Brown rounded out the top five with runs of 3.776 and 3.790, respectively, and four more drivers — Justin Ashley, Leah Pruett, Josh Hart, and Doug Foley — made quality runs in the 3.80s.

Ron Capps had a fiery end to his weekend in Epping, along with a disappointing first-round defeat, but that memory was quickly erased after he raced to the top in Funny Car thanks to his standout pass of 3.888 at 329.34 in his NAPA Auto Parts Dodge Charger SRT Hellcat.

It would give Capps his second top qualifier this season after he did it in Gainesville to open the 2021 season and 27th in his career. The run brought a smile to Capps’ face, even as the parachutes were late in deploying as the veteran came just a few feet short of going into the sand. With that close call out of the way, Capps is focused on earning his first victory of the year this weekend in Norwalk.

"Just getting qualified is a big deal right now,” Capps said. “You want to take advantage of these conditions. After the disappointment of losing in the first round in Epping, you want to go out there and show what we’ve got. We’ve been qualifying well, we just haven’t had the breaks. It’s been a lot of fun and we just need to push a little further. Funny Car is as tough as it’s ever been. Trying to win a Funny Car race is tougher than ever.” 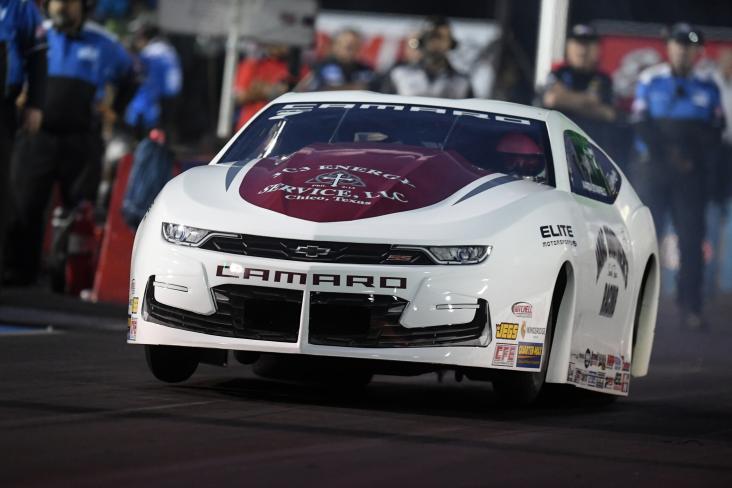 Coming off his second career victory in Epping, Pro Stock’s Aaron Stanfield now has a prime opportunity to pick up his first career No. 1 qualifier in the class. He went a strong 6.616 at 206.57 in his Janac Brothers Camaro to slip past Elite Motorsports teammate Erica Enders, who went 6.620 at 206.83 just two passes earlier.

Stanfield, though, is in top form, rolling to the win in Epping by beating points leader Greg Anderson in the final round and continuing that momentum in Norwalk. It’s also a splendid first impression in front of the Norwalk fans with Stanfield making his first Pro Stock appearance at the first-class facility.

Anderson was a touch off his usual pace on Friday after going 6.626 at 208.04, while Matt Hartford and Dallas Glenn rounded out the top five.

Summit Racing Equipment Motorsports Park continues to treat Andrew Hines well, as the five-time event winner went to the top on the strength of his 6.855 at 200.68 on his Vance & Hines Buell. It was a much-needed run for Hines, who is looking to get his 2021 campaign on track after struggling in Charlotte. Should it hold, it would be Hines’ first No. 1 qualifier this season and 45th in his terrific career.

After a six-week break, Hines looked in top form on Friday, though he has plenty of company right behind him. Defending world champ and points leader Matt Smith couldn’t have been much closer going 6.856 198.79. Joey Gladstone delivered a 6.863 at 197.91 to sit third, while Hines’ teammate, Eddie Krawiec, set a track speed record after going 6.892 at 201.22.