Johnson capped off a tremendous Sunday at Maple Grove victory with his second victory of the season, rolling to the win in the final round of the Mopar Express Lane NHRA Nationals presented by Pennzoil with a run of 6.775 at 196.87 against Eddie Krawiec.
12 Sep 2021
Josh Hachat
Race coverage

Steve Johnson’s dream season continues to build and now he’s the points leader in Pro Stock Motorcycle for the first time since 2014.

Johnson capped off a tremendous Sunday at Maple Grove victory with his second victory of the season, rolling to the win in the final round of the Mopar Express Lane NHRA Nationals presented by Pennzoil with a run of 6.775-seconds at 196.87 mph on his four-valve Mac Rak/Slick 50 Suzuki against Eddie Krawiec, who went 6.870. 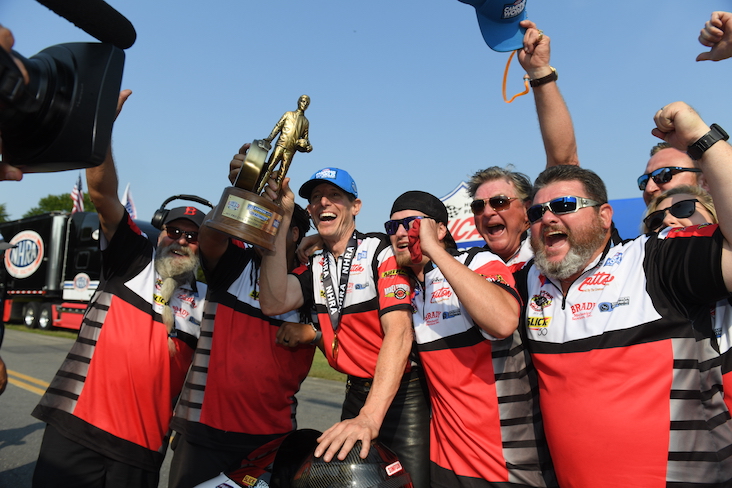 Johnson reached the championship round for the third time this season — the first time that’s happened since 2014 — and 26th time in his career with victories against Jim Underdahl, Scotty Pollacheck and No. 1 qualifier Angelle Sampey.

In the final round against Krawiec, Johnson and his team tuned up something special, making his quickest run of the weekend. After struggling during the first two qualifying sessions, Johnson hit on something in the final qualifier and that carried over to Sunday.

He ran 6.788 in the second round and 6.804 in the semifinals before his massive run in the final round to continue his impressive turnaround season. Krawiec left first, but Johnson blew by him almost immediately, taking incredible momentum into next weekend’s race at Charlotte, where he won earlier this season to break a winless stretch of — you guessed it — seven years.

“The driver that was here on Friday and Saturday, he was atrocious,” Johnson said, referring to himself. “The weather was so fantastic and everyone was counting on fast, record-setting times. I just got sideways and everybody said to go back to fundamentals. I was out here for a long time before racing started just working on the fundamentals. You can always learn. I was really, really bad on Friday and Saturday, and everyone was going fast. That’s a classic example of riding a bike or driving it, and the driver was here on Sunday.”

Krawiec continues to be red-hot on his Buell, reaching his second straight final round, third this season and 78th in his career with victories against Kelly Clontz, Angie Smith and defending world champ Matt Smith. Angie suffered a red-light start on what was a quicker run, while Matt’s bike suffered problems late in the run.

Johnson’s points lead over Matt Smith stands at just 12 points, while Krawiec is third in points, 36 back of Sunday’s winner. It is Johnson’s second victory in the Countdown to the Championship and the first time he’s ever led in the playoffs.