Dallas Glenn entered the 2021 Pro Stock season with plenty of excitement, which is understandable considering he was making his debut in the class. But what initially started as a four-race intro to NHRA Camping World Drag Racing Series racing ended up far beyond that.
03 Dec 2021
Josh Hachat
Feature

Dallas Glenn entered the 2021 Pro Stock season with plenty of excitement, which is understandable considering he was making his debut in the class.

But what initially started as a four-race intro to NHRA Camping World Drag Racing Series racing ended up far beyond that.

After initial success and a win in his fourth career start, Glenn parlayed that into a full-season sponsorship with RAD Torque Systems and he kept rolling, adding two more victories, the NHRA Rookie of the Year and an impressive third-place finish in the loaded Pro Stock class.

After finally getting his chance to live a lifelong dream, Glenn had high hopes, but all of those were certainly surpassed in a debut season he never could have expected.

“I’m absolutely thrilled with the success I had. I had fairly high expectations of myself, and I knew I could do it, but being able to prove it to yourself while you’re doing it is another thing,” Glenn said. “To have the success we did, it felt like we accomplished a lot. It was a great feeling to pull off what we did. The car is just so much fun to drive.” 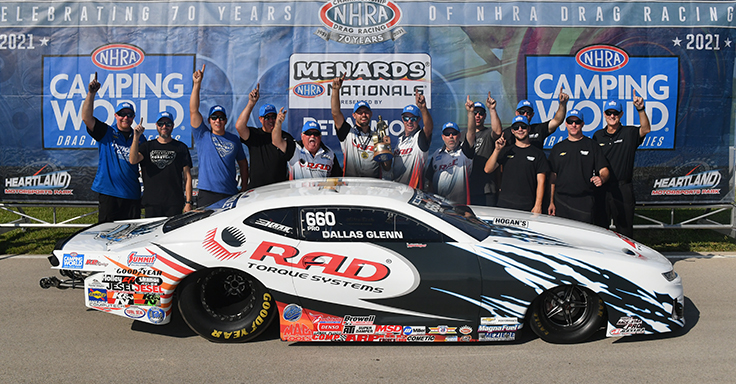 Glenn finished with victories at the Charlotte four-wide event, Topeka, and the penultimate race of the 2021 campaign in Las Vegas, advancing to five final rounds and adding an additional semifinal appearance.

Once he found a rhythm in the car, Glenn was a force in the class, qualifying in the top five at the final five races.

That came with constant work and tinkering, along with some considerable changes the team made to the car early in the season. That made Glenn more comfortable, and he was a star on the starting line, posting reaction times of .000 and .001 in the final round of his wins in Topeka and Las Vegas, respectively.

“I’ve got a much better idea of all the finer details of driving and the importance of doing everything exactly the same every time,” Glenn said. “It’s all those small little details, and once we started really getting the car figured out, the pressure was on me to perform. But what makes it easy is the car is so much fun to drive. That makes the pressure kind of go away.”

Of course, Glenn simply loves any kind of racing. The week after the NHRA Finals in Pomona, he was in his bracket car, and he figures it won’t be long until he’s itching to get behind the wheel of his RAD Torque Systems Chevy Camaro. 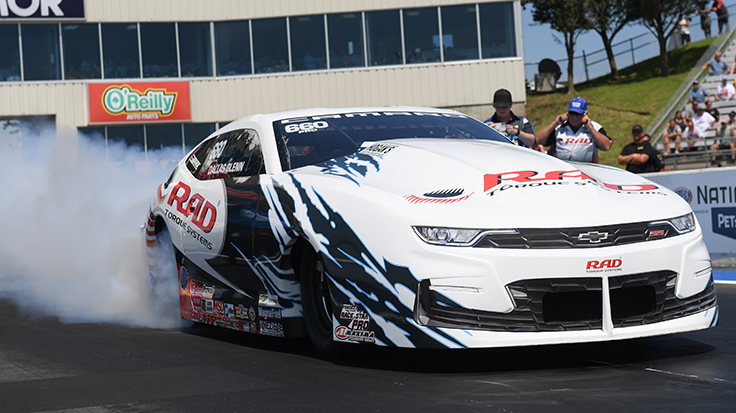 He has noticed the buzz from winning the championship in the KB Racing shop after a banner year for the team. Along with Glenn’s success, Greg Anderson won his fifth world title and claimed his 99th win to become the all-time-wins leader in the class, and Kyle Koretsky finished fourth and picked up his first career Pro Stock win.

It’s given the team plenty of momentum heading into the offseason, but Glenn believes it’s only going to propel the team to work that much harder in the winter months. They dominated much of the season, and Glenn, for one, wants that momentum to carry over well into 2022.

“The goal will always be to get better. The day you’re fine with not getting better is the day you’ll start getting crushed or it’s time to quit,” Glenn said. “There will always be a desire to get more horsepower, get something to work a little better.

“You take what we were able to do in the Countdown [to the Championship], and I want to build on that success and go straight into next year with a full head of steam. I want to do everything I can to jump into the season on a strong note. I’m not going to relax, and I’m going to try to stay aggressive.”