It was less than two years ago — at the fall Las Vegas event in 2019 — that Top Fuel reached its 900-event milestone, and its nitro-burning little brother, Funny Car, reached the same milestone last weekend in New England.

The NHRA on FOX team did a deep dive into the stats and found that Pomona has hosted the most Funny Car races at 89 (not surprising because it’s held two events annually since 1984) followed by Indy (56, again, not surprising, as its our oldest event), and Gainesville, our third oldest event, is third with 52. In all, 33 different venues have staged an NHRA national event Funny Car race. 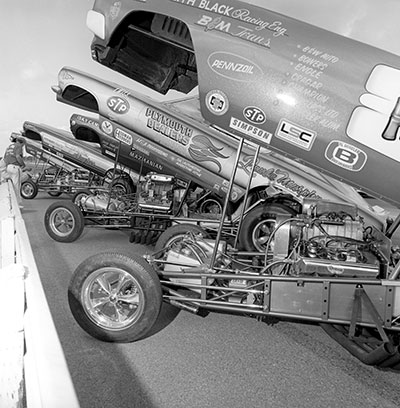 There have been 92 different winners in those 900 events (I’ve compiled the complete list here), led, of course, by John Force’s 153 wins, and 23 different champions crowned since 1970, the first year the class had a champion, led, again, by Force with 16.

Over the years, I’ve covered the class’ history extensively, from its first seasons to the years since, especially its 50th anniversary season in 2016, so I won’t cover that same ground again.

(If you are interested in a deep look at the class’ history and heroes, here’s a deep link to that 2016 content. You can find a slew of vintage Funny Car articles — including our amazing Top 20 Funny Car drivers list — in the Dragster Insider archive.)

No, instead, I’m just going to make the kind of weird, stream-of-consciousness observations that you pay me the big bucks to make (still waiting on those checks, people) and drop some random nitro notes and flopper facts on your noggins.

Top Fuel’s first race was the 1963 Winternationals, and Funny Car’s first event was the 1966 World Finals and, and Top Fuel began crowning world champions in 1964 (Jack Williams). Funny Car did not name a champ until 1970 (Gene Snow) when the class first race at every event. Funny Car did not run every event that Top Fuel did until the 1970 season. They’ve been partners in elapsed time every one of the 895 races since the 1970 Winternationals except for the 1981 Cajun Nationals, where the Funny Car drivers actually boycotted the event while seeking a larger purse (which they got).

THE FORCE IS STRONG

It was somehow very appropriate that the class’ legendary kingpin, all-time NHRA wins leader Force, won the New England Nationals, collecting win No. 153, which means he’s won roughly one in every six Funny Car races even though his career didn’t start until the 1977 Winternationals, Funny Car’s 62nd event. Of course, back then he was still eating bologna sandwiches three times a day (if he was lucky) and sleeping six to a hotel room, and didn’t run every event. The Epping event was Force’s 795th start, so he’s won 153 times in 795 events, or one in every 5.19 events at which he was entered. Extrapolating that a little further, removing his 26 career DNQs, he’s won almost exactly every five starts. And, because you asked (probably), if you only count his last 717 starts that begin with his breakthrough first win in Montreal in 1987, he’s won every 4.6 events. Not bad for “an old truck driver.”

As you can see in the graphic below, Force has been pretty good on “the hundreds.” 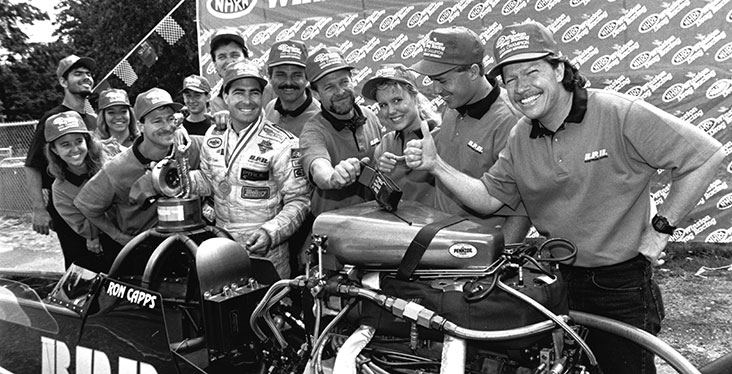 Force obviously is the class’ all-time wins leader (153) and teammate Robert Hight is third with 52, sandwiched around Ron Capps at 65. Force has 16 championships and Hight three to Capps’ lone title, but Capps can claim something that neither Force nor Hight can: He’s just one of 17 drivers in NHRA history to collect wins in both Top Fuel and Funny Car, having won in Top Fuel in Seattle in 1995 before his Funny Car career started. Can you name all 17? (Answer here) 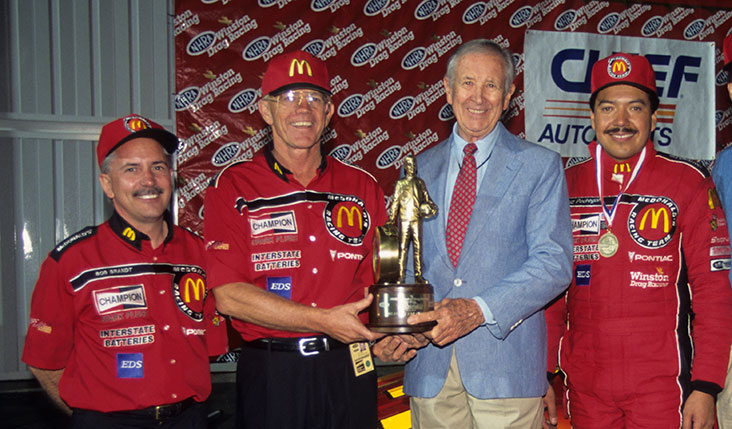 Cruz Pedregon and Matt Hagan each have 36 wins — tied for fifth overall — even though Hagan spotted “the Cruzer” 26 wins before notching his first win at the 2010 Houston event. It’s really a tale of the pendulum swing. Pedregon, pictured above right with NHRA Founder Wally Parks, team owner "Coach" Joe Gibbs, and crew chief Bob Brandt, notched 22 of his wins in an eight-year span (1992-2000) and only 14 in the 20 years since Hagan has won all 36 of his in the last 10-plus seasons.

Both Pedregon and Hagan have just one more Funny Car win than Prudhomme, whose last Funny Car win was in 1989, three years before Pedregon scored his first. That’s how good “the Snake” was in the 1970s and ‘80s. Prudhomme was the class’ all-time win leader (35) until Force earned No. 36 at the 1994 Topeka event and never looked back.

Ed Schartman, Doug Thorley, Tommy Grove, Clare Sanders, and Danny Ongais won Funny Car's first five events, and it wasn't until Ongais added his second win, at the 1969 Nationals, that there was a two-time winner. Gene Snow was the first to three wins, all coming in the 1970 season, and Ed McCulloch was the first to four and then five victories thanks to a four-win 1972 campaign.

McCulloch was stuck on five wins from the 1972 Indy event to the 1980 Indy event, and Prudhomme snuck past him during his monstrous six-win 1975 season and pulled even further ahead of everyone with seven wins the following year. 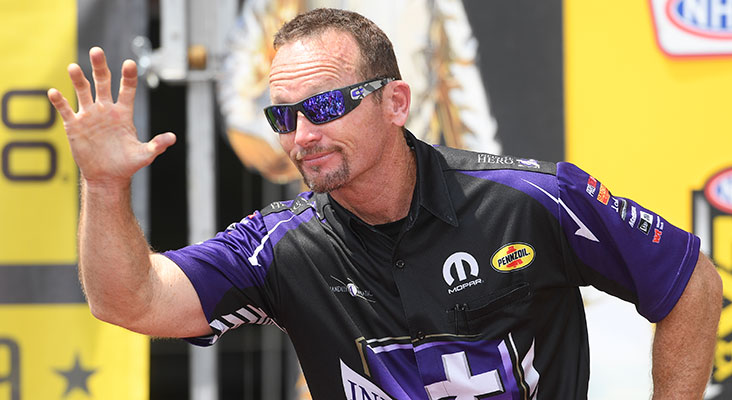 Until the sponsorship well ran dry at the end of last year, Jack Beckman was another sure bet to pass Prudhomme, having won 33 events over the last 14 seasons. Looking at those 33 wins, he didn’t have a lot of easy final rounds as 21 of them were against Funny Car world champions. He beat John Force in six of them, Ron Capps and Robert Hight four times each, Hagan three times, and had solo wins over Cruz Pedregon, Frank Hawley, Del Worsham, and J.R. Todd.

Speaking of Funny Car world champions, here's the roll call of champs. Remember, from 1970-73, the world champion was the guy who won the World Finals. From 1974-2006, it was a straight points battle, and from 2007 on (excluding last year's "pandemic points"), it was decided in the Countdown to the Championship. 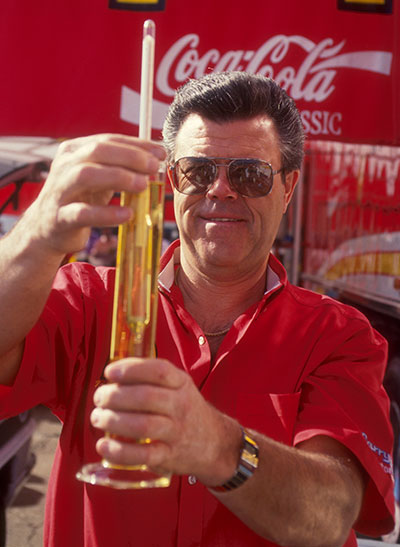 As you can see, for a remarkable span of 10 years, “the Snake,” who got his first Funny Car win at the 1973 U.S. Nationals after five previous Top Fuel wins, was the only driver to have won in both classes until Mark Oswald at the 1983 Montreal event after a pair of Top Fuel wins the previous year.

Who could be next? Well, Tim Wilkerson now owns a Top Fueler. Austin Prock conceivably could drive a JFR Funny Car to a win. Or John Force could drive one of his dragsters? Mike Salinas would probably drive a Funny Car. I know Leah Pruett would. The mind reels.

EVERYONE WHO'S EVER WON