See it for yourself! Ford Performance's Cobra Jet 1400 to run in Las Vegas

"The goal is to go faster than any man has ever gone in an electric Mustang."—Bob Tasca III
26 Oct 2021
David Kennedy
Feature

8.128 @ 171.97 mph. That's the time and speed Bob Tasca III is looking to beat this weekend at the 2021 Dodge//SRT NHRA Nationals Presented By Pennzoil at. Will he do it? With the high-altitude and great race surface in Las Vegas, and the energy that comes from this being the 1,000th NHRA National event in history—we say don't bet against him!

To catch all the action of the 2021 Dodge//SRT NHRA Nationals Presented By Pennzoil in person you can buy your tickets HERE, livestream the race on NHRA.tv, and be sure to watch the full NHRA on FOX broadcast on FS1!

What Is the Ford Performance Cobra Jet 1400?

In 2020 Ford revealed a concept car it calls the Mustang Cobra Jet 1400.  It’s an all-electric drag car based on its Constant Aviation NHRA Factory Stock Showdown Cobra Jet built by Watson Engineering, and it’s been modified to accept an electric powertrain that puts out more than 1,400 hp—enough to propel the car to low-eight-second e.t.’s at more than 170 mph.

Ford says the Cobra Jet 1400 was built to demonstrate the capabilities of an electric powertrain in one of the most demanding race environments on earth — the dragstrip. It’s also a way to mix two of the automaker’s most dynamic research and development capabilities: combine the problem-solving mindset of motorsports with the future-leaning resources of electrification.

“Ford has always used motorsport to demonstrate innovation,” said Dave Pericak, Global Director, Ford Icons. “Electric powertrains give us a completely new kind of performance, and the all-electric Cobra Jet 1400 is one example of pushing new technology to the absolute limit. We’re excited to showcase what’s possible in an exciting year when we also have the all-electric Mustang Mach-E joining the Mustang family.” 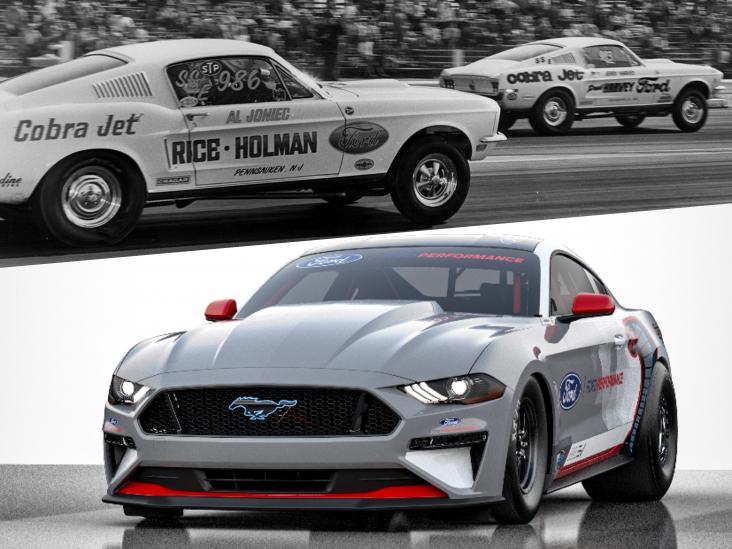 As seen in the photos, the Mustang Cobra Jet 1400 honors the original Cobra Jet that debuted at the 1968 NHRA Winternationals and was the dominant car in the 2019 Constant Aviation Factory Stock Showdown.