Angie Smith has a new bike, but she’s hoping for the same result from her last appearance at The Strip at Las Vegas Motor Speedway, this time at her sponsor’s race, the Denso Spark Plugs NHRA Four-Wide Nationals.
16 Apr 2021
Josh Hachat
Feature

Angie Smith has a new bike, but she’s hoping for the same result from her last appearance at The Strip at Las Vegas Motor Speedway.

Smith closed out her 2020 Pro Stock Motorcycle with a victory in Vegas last fall and she’s back this weekend hoping for another win at the same facility, this time at her sponsor’s race, the Denso Spark Plugs NHRA Four-Wide Nationals.

If it happens, it will come on a new bike she and the Matt Smith Racing team debuted in Gainesville. Smith lost in the opening round there working through some early-run issues on the new Denso EBR, but testing and plenty of time working on it in the past month has A. Smith confident the bike will show more of its potential in Vegas - which would equate to perfect timing for everyone. 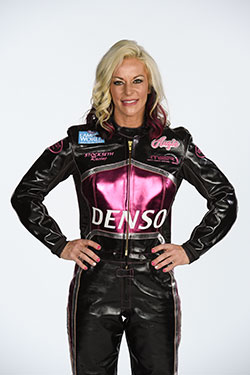 “The bike showed good promise in testing, and I’m very eager to get back at it,” Smith said. “In testing before Gainesville, it showed some good 60-foot times, but when we got there we just couldn’t get ahold of the track in the first 60-foot.

“We went home, looked at a lot of the graphs, changed the tire, and got the performance back. The tire just needed to be changed. We added a couple of new things to add to the 60-foot, and we made some good runs in testing to give me the extra boost of confidence. Now we need to do it this weekend.”

Smith came on strong to finish 2020, recording her first 200 mph run in Dallas and becoming the first female in class history to do so. She followed that up with the win in Vegas to head into the off-season in style, but there were adjustments to be made with the new bike.

Confident those changes are now good to go, Smith will now look to win her first four-wide race. It’s the first for any NHRA competitor in two years, but Smith heads into the weekend with a set game plan regarding her approach for the unique race.

“I’ve raced long enough where I know people’s habits. Some people want to go in last, some want to go in first, so I think the main thing is you have to be aware of who you’re racing,” Smith said. “If you have your mindset set to go in first or third or last, or whatever it is, you have to stick to that because it can get confusing quick. I’m the type of person that makes up my mind beforehand. I like to have all that planned out, especially for the four-wide races. Things can get pretty hectic if you don’t have a plan going in.”

Of course, a win at a Denso-sponsored race would be a massive achievement for Smith, who is equally happy to welcome back a significant amount of fans in Vegas. All grandstand tickets have been sold for the weekend, as state and local officials allowed the track to host fans at 50-percent capacity for the race in Las Vegas.

The added bonus is a four-wide win would also give the Smith family three straight wins in the class following her Vegas win to close out 2020 and her husband’s victory to open the 2021 campaign in Gainesville.

“Of course, we want to put our bikes in the winner’s circle and add to our resume that we won our title sponsor’s race,” Smith said. “It’s just a bonus to win your sponsor’s race, and hopefully we can do that. It would be huge.”