Mike Salinas, Matt Hagan, and Greg Anderson will lead their prospective pro fields into the first round of eliminations at the NHRA Midwest Nationals. Salinas and Anderson set the pace during Friday’s opening qualifying session in Top Fuel and Pro Stock, respectively. Each driver managed to survive a pair of competitive qualifying sessions on Saturday. Ron Capps came into Saturday as the leader in Funny Car and was knocked from that perch by Matt Hagan.

Following Friday’s moonshot 3.652-second run, it was admittedly going to be difficult for anyone to dislodge Salinas from the top qualifying spot for the quick Top Fuel field at the NHRA Midwest Nationals in St. Louis. Most of the field gave it their best shot during Saturday’s two qualifying runs, but in the end, no one was able to match the performance of the Scrappers team. 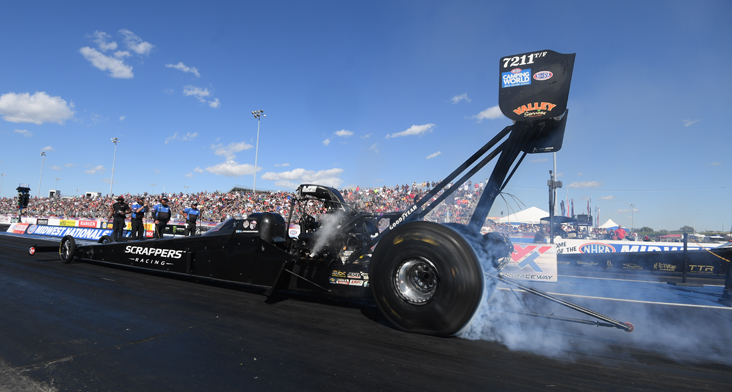 Even Salinas was unable to improve. He smoked the tires in Q2 and returned later in the afternoon to run a 3.727 He’ll kick off eliminations from the No. 1 spot and will face bump spot qualifier Kyle Wurtzel in Sunday’s opening round, which kicks off at 10:30 a.m.

“Alan Johnson has been working on a few things and right now, I’m pretty happy with our results,” said Salinas. “I believe we’re headed in the right direction. The real impressive numbers are the 330’ incremental times. There is nobody out here that you take lightly. Its really impressive how this whole class is. When you watch what Brittany’s crew does and what [Steve] Torrence does, everyone is just out here trying to top everyone. I know that [David] Grubnic found something with Brittany’s car and I think we’re on to the same thing.

“I really need to get better on my reaction times,” Salinas admitted. “The car is also moving around a little on the top end and I have to clean up my act. Racing the Pro Mod car has been fun and it’s helping me. I used sed to cut decent light before I turned 60 years old. Now, that’s changed. My ultimate goal is to be like [Josh] Hart and [Justin] Ashley. They go .035 to .040. You’re not going to win with an .80 or .90 light.”

Brittany Force, who did not get down the track on Friday, watched as her eight race low qualifier streak came to an end, but she didn’t go down without a fight. Force made the best run of the day on Saturday afternoon with a 3.663 to earn three bonus points. Force’s Monster Energy dragster was also the quickest car in Saturday’s first session with a 3.700 run that was good for the No. 2 spot. She added six points to her total during the day.

Saturday’s biggest move came from Leah Pruett, who blasted to a 3.714 in her Okuma-themed dragster. Pruett and her DSR crew elected to switch cars on Saturday and they were rewarded with the No. 4 spot in the very quick field. Pruett’s reward for her solid qualifying effort will be a round one race against Clay Millican, who landed in the No. 14 spot in spite of a very competitive 3.780 run.

The bump spot in Top Fuel approached record territory with all 16 qualifiers in the field running 3.809 or quicker. The quickest NHRA Top Fuel field came at the 2019 U.S. Nationals and featured a 3.77-second bump.

The competition in the Funny Car class has been incredibly close all season so it should not have been a surprise to see the top qualifiers in St. Louis separated by a very small margin. Capps came into the day as the leader with a 3.888 and he improved to a 3.876 late in the day but that wasn’t enough to hold off Hagan, who lowered the boom with a 3.868 in his New Holland Dodge Charger. With 15 cars in the field and a very tight race in the points, Hagan will be richly rewarded with a bye run on Sunday morning.

“Obviously, I’m humbled and blessed to be here,” said Hagan. “We’re throwing down and I can’t say enough about [crew chief] Dickie Venables. Every run that Dickie makes he is getting better. He knows exactly what he’s doing, and we scooped up some points in qualifying.

“Sitting in that race car is incredible. It gets light in the front end when the clutch comes in. Runs like that build my confidence. I’ve got a car to win a championship. I’ve won three times and been runner-up and runner-up twice. I know what it feels like when things come together.”

Cruz Pedregon, Blake Alexander, Bob Tasca III, and Robert Hight also stepped up late in the session with 3.8-second runs. Hight improved to a 3.896, but that wasn’t enough for him to avoid a round one race against his boss, John Force. Both drivers are in contention for the Camping World Funny Car championship and one of them will inevitably take a round one loss this weekend.

Tin Wilkerson, winner of two of the last four events, landed in the eighth spot with a 3.905 and he also faces a tough battle against the DHL Toyota of former champ J.R. Todd.

Saturday’s weather conditions provided an opportunity for Pro Stock racers to improve on Friday’s numbers and several racers did just that with plenty of mid-pack shuffling. The real jaw-dropper came at the end of the session when Anderson blasted to a 6.519 in his HendrickCars.com Camaro, bettering his own 6.536 from Saturday. In a class where performance is measured in microscopic increments, Anderson holds a two-hundredths of a second lead over the rest of the field.

“That was a very good run,” said Anderson. “We missed on morning run; all of us missed it. We should have all run better. In the afternoon, several guys still missed it. We didn’t. We didn’t leave a lot on the table. That was close to a perfect run. We got all the points they had to give today; it’s what you call a great day at the office.

“On Sunday, what you have to do is forget all about who is in the other lane,” Anderson said. “You have to race your own side of the Christmas Tree. You can’t think about it or it will cost you E.T. You just have to act like you’re testing. If you can do that, you’ll be better off.”

As he continues his pursuit of a fifth championship, Anderson will race Fernando Cuadra Sr. in Sunday’s opening round of eliminations. He entered the St. Louis event with a 65 point lead over Erica Enders in the standings. Anderson added nine points to his total by registering low elapsed time of all three qualifying sessions.

Charlotte winner Kyle Koretsky also made a significant improvement on Saturday, wheeling his Lucas Oil/Nitro Fish Camaro to the No. 2 spot. Koretsky and KB Racing teammate Dallas Glenn made identical 6.537 runs and Koretsky claimed the higher spot due to his faster speed, 209.30 to 208.91. Koretsky is scheduled to race Marty Robertson while Glenn, a two-time winner this season, will race Cristian Cuadra.

Erica Enders has an appointment with fellow world champion Bo Butner in round one after they qualified No. 5 and No. 12 respectively. Enders is aiming for her third-straight win in St. Louis.