Torrence, Capps, Anderson and Johnson quickest in qualifying at Norwalk

Steve Torrence and Ron Capps saw their strong runs from Friday hold up to close out qualifying in Top Fuel and Funny Car, respectively, while Greg Anderson and Steve Johnson made big moves on Saturday to finish in the No. 1 positions in Pro Stock and Pro Stock Motorcycle at the Summit Racing Equipment NHRA Nationals.

There was plenty of action on Saturday in Norwalk as an entertaining day of final qualifying wrapped up at Summit Racing Equipment Motorsports Park, setting the table for final eliminations at the seventh race of 2021.

Steve Torrence couldn’t improve on his run of 3.705-seconds at 324.83 mph in his Capco Contractors Top Fuel dragster from Friday, but Saturday still turned into a great day for the points leader and three-time defending world champ. He made the best runs in each of the two qualifying sessions on Saturday, including an impressive pass of 3.728 at 327.19 to close out the day.

That gives the Texan his third No. 1 qualifier of the year and plenty to work with to pick up his third Norwalk win in the past four events. Qualifying No. 1 didn’t earn him much of a reprieve, however, as he’ll meet Shawn Langdon in the first round of eliminations. Langdon has struggled mightily during the first two days, but that’s a team talented enough to get things turned around.

“It gives you a lot of confidence as a driver to know you’ve got a car that was low every session, went A to B and had no hiccups,” Torrence said. “It definitely boosts your confidence, but tomorrow is going to be a lot hotter and track conditions are going to change a lot. We’ll go do the best we can and see if we can go four rounds tomorrow.”

Brittany Force’s 3.722 from Friday kept her second, but she also performed well on Saturday, finishing her day with 3.731 at 325.69. That consistency could be pivotal as the former world champ looks for her first victory of the year. Billy Torrence maintained his third position, with his 3.724 from Friday easily holding up.

In arguably the news of the day, Austin Prock stepped in for Clay Millican, who is suffering from an ear infection, and looked like he hasn’t missed a beat. He made his 2021 debut during Saturday’s qualifying sessions, making two strong runs, including a 3.764 at 323.35 to qualify fourth. It’s just for this weekend, but Prock showed the skill that made him the 2019 NHRA Rookie of the Year and made him a viable contender on Sunday. 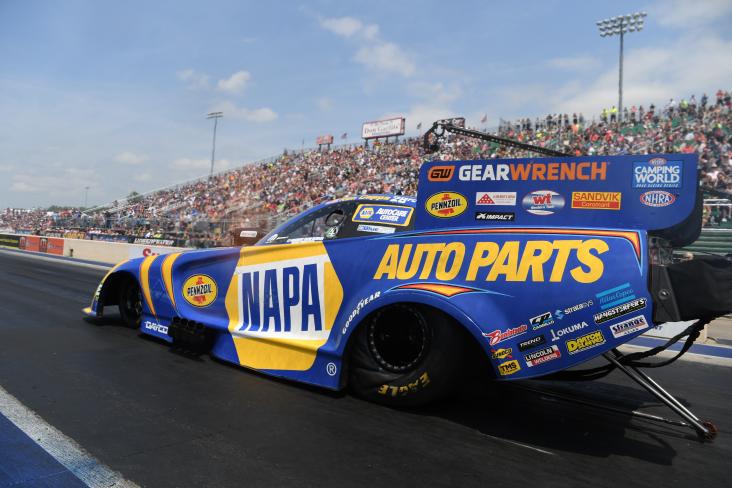 Ron Capps’ 3.888 from Friday wasn’t challenged in Funny Car, giving him his second No. 1 qualifier this season and 27th in his career. The good news for Capps was his 3.968 to close out the day, giving him some added confidence heading into eliminations, where the first-round storyline is rich with drama.

Capps will face off with Terry Haddock on Sunday, the exact same matchup from the last race in Epping where Haddock pulled the major upset and advanced to the semifinals. Capps get an immediate chance to make amends and he’s confident heading into eliminations.

“It’s a great start with a great car,” Capps said. "Tomorrow is going to be warmer and it’s going to be tough conditions. We’re racing Terry Haddock again in the first round and like I said in Epping, you can’t take anyone lightly. We’ll be on our game and we’re going to go up and try to keep doing what we’ve been doing this weekend. We don’t want to change anything. The car’s running great and a Wally is coming.”

Robert Hight’s 3.895 from Friday kept him second, but he wowed Saturday’s huge crowd in Norwalk by going 3.911 at a whopping 331.20 to close out his day. That makes him a huge favorite to advance to his third straight final. Matt Hagan took third and also ran a strong time in the final session, as the defending champ went 3.917. John Force (3.928) and Bob Tasca III (3.934), the defending event winner, round out a loaded top five, with a number of solid performers — Alexis DeJoria, Tim Wilkerson, Mike McIntire, J.R. Todd and Cruz Pedregon — lurking close behind to round out the top 10.

After it appeared Greg Anderson was a touch off on Friday, the veteran made amends by making huge improvements in both of his runs on Saturday in Pro Stock. The end result was yet another No. 1 qualifier, giving him six in seven races in 2021, after going 6.602 at 206.54 in his HendrickCars.com Chevrolet Camaro.

He now has an incredible 112 No. 1 qualifiers in his career, but the important number for Anderson is career wins, and he remains one behind Warren Johnson’s 97. He’ll get another chance to match Johnson on Sunday after falling in the final round in Epping. With the car running almost flawlessly, Anderson was thrilled about Sunday possibilities.

“It’s all about positivity and you’ve got to think positive if you want results. I’m going to think positive all day tomorrow and there’s a lot to be positive about,” said Anderson, who has three wins in Norwalk. “I’m racing here at a beautiful race track and the fans are excited, and everything’s great about that. It all comes down to execution on Sunday. I didn’t close the deal at the last race and I need to close the deal tomorrow. I’m having a blast. We’ve got a beautiful car, it’s fast and it’s a dream to drive. It’s all good.”

Aaron Stanfield, the provisional No. 1 qualifier on Friday (6.615), got bumped to second, with teammate Erica Enders in third (6.620), though Enders didn’t put together a great pass in either session on Saturday. Matt Hartford did, however, qualifying fourth and going 6.624 on his final run, the second-quickest of the session.

Dallas Glenn rounded out the top five (6.658) and Troy Coughlin Jr. jumped to sixth in the final session with a 6.635, his best run of the weekend.

After a rough Friday, Steve Johnson delivered in Pro Stock Motorcycle, shattering the track record on his Slick 50 Suzuki with a standout run of 6.789 at 198.44. It’s Johnson’s first top qualifier since 2019 and the fifth in the veteran’s career as he keeps rolling right along following his victory last month in Charlotte. Johnson and his team have been terrific in harnessing the power of this new four-valve Suzuki and the results have been obvious, making the first run in the 6.70s in class history at Norwalk.

“I’m just so proud. We just take all those tiny details and it’s all about this race team. It’s so good to get a yellow (No. 1 qualifier) hat,” Johnson said.

Third in points entering the weekend, Johnson made two strong runs on Saturday after struggling under the lights on Friday. It now puts him in a great position to win a second straight race, something he hasn’t done since 2008.

It won’t be a cakewalk, that’s for sure, as a number of riders stepped up on Saturday, including Eddie Krawiec, and points leader and defending world champ Matt Smith. Krawiec made a major improvement on his final run, going all the way to second on the strength of a 6.807 at 201.49, which momentarily gave him the track speed record before Smith came to the starting line.

Smith grabbed the top spot from Johnson early in the day and then nearly matched him in the final session, going 6.815 at a track-record 201.58 mph. Andrew Hines finished fourth (6.831) while improving on his run from Friday and Joey Gladstone’s 6.863 rounded out the top five. Angelle Sampey was the only other rider to make a run in the 6.80s, qualifying sixth with a 6.878.