With six drivers still mathematically in contention for the 2021 NHRA Camping World Drag Racing Series Funny Car championship, the battle would seem to be the most mathematically complex of the four still up for grabs.

All six are listed because there is a maximum of 187 points available at the season-ending Auto Club NHRA Finals in Pomona, but realistically, it’s a three-driver battle between Capps, Hagan, and Pedregon. I say this because of those 187 points, 15 will go to each driver for making one qualifying run, which ends Hight’s chances before they begin. The chances of Todd, Force, and Tasca rely largely on Capps not qualifying, which are slim at best. Capps’ last DNQ was at the spring Las Vegas event in 2016. Let's also not forget that Capps won the Lucas Oil NHRA Winternationals presented by ProtectTheHarvest.com in Pomona a few months ago.

If Force does win a record 17th championship, my proclamation here won’t exactly be as bad a “Dewey defeats Truman” (kids, ask your grandparents), but I will treat Force to a trip to the movies (popcorn included). But I digress.

Before we begin to dissect the Capps-Hagan-Pedregon scenarios, a quick reminder of how those 187 points can be accrued:

Performance bonus points are awarded for each of the three qualifying sessions as follows:

Performance bonus points WILL NOT be awarded for any session unable to be completed.

With 30 points awarded for each round-win, Hagan needs to go two rounds further than Capps and Pedregon three rounds further unless Capps is able to earn three more points in qualifying than Hagan or seven more than Pedregon to add another round to their assignment. As you can see above, there are numerous ways for this to happen.

For the record, Capps and Hagan have both  accumulated 50 session bonus points over the course of the season (trailing only Hight’s 52), and Cruz has collected just 21 over the season’s first 19 events.

Capps’ qualifying position average is 3.73 over 19 events, and Hagan’s is 4.22 (including Tommy Johnson’s substitute in Reading but not T.J.'s zero-run DNQ in Indy), and Pedregon averages 5.9, so if they continue to trend that way in Pomona, it might be tough for Capps to pick up those three points over Hagan.

Assuming that the points gaps stay the same (i.e., Hagan can keep Capps’ lead under 60 and Pedregon keeps Capps' under 90), the scenarios look like this for either to pass Capps:

If Capps falls out early, Pedregon will have to go one round further than Hagan to take the lead. 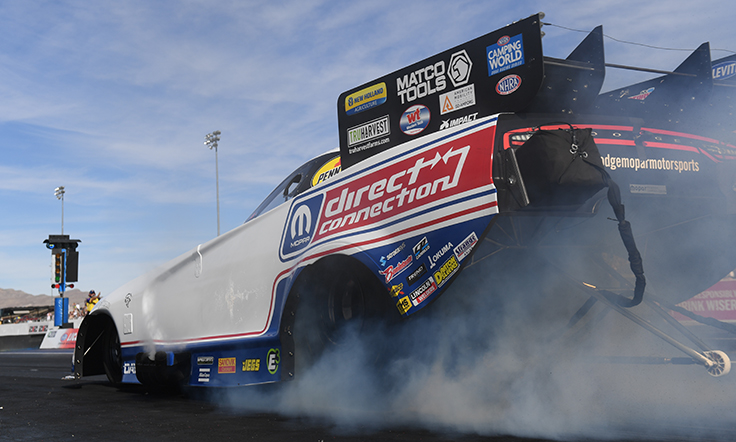 The fine print:
All of this happens under the specter of possible centerline violations that would cost Capps 10 points and Hagan and Pedregon five points for crossing the centerline after the finish line and before the 1,320 mark (and going up in five-point increments to a max of 15 for subsequent violations).

Tiebreakers:
Because the chance of a tie always exists, here are the three tiebreakers, in order of application:
1. Head to head record in Countdown: Capps leads Hagan 2-1 (includes T.J.'s Reading win over Capps); Capps leads Pedregon 2-1; Hagan leads Pedregon 1-0
2. Rounds won in the Countdown: Capps and Pedregon each have 13, Hagan has 12 (including the four that T.J. won for him in Reading)
3.  Quickest average qualifying e.t. in Countdown qualifying: Let's hope it doesn't come down to this. If it does, I’ll bust out the calculator real quick.

Fact:
Hagan is gunning for a fourth world championship, which would make him just the fourth Funny Car driver to win four or more titles. It would tie him with class icons Don Prudhomme and Kenny Bernstein, with all three well behind Force’s 16 championships. Pedregon is aiming for a third title (to tie Robert Hight and Raymond Beadle) and Capps his second (which would tie him with Frank Hawley and Tony Pedregon)

Quotable:
"Pomona is a such an outlier with the points-and-a-half deal. There’s so many points up for grabs. I’m not even thinking about winning this thing. We’ll keep doing what we’ve been doing." — Ron Capps

“I don’t know how you put a positive spin on [losing in the first round in Las Vegas]. That’s going to be a tough one to get over. It’s a major blow to us right now, but we’ll get over it and get back after it in Pomona.” — Matt Hagan

"With points and a half in play, we're not even guaranteed to finish in the top three. It's pretty open-ended, but after winning [in Las Vegas], hey, we're back in it. We’re going to come out swinging at Pomona and see who the last man standing is. Just to be in the conversation for a change really is a victory for me." — Cruz Pedregon