A first-ever win at the Auto Club NHRA Finals would ensure Ron Capps would walk away with his second career Funny Car world championship in the loaded Funny Car class.
12 Nov 2021
Posted by NHRA.com staff
Feature

Having already won once at Auto Club Raceway at Pomona this year, longtime star Ron Capps will try to do something he’s never done in his impressive career, and that’s win the Auto Club NHRA Finals. The NHRA Camping World Drag Racing Series closes out its 2021 campaign at Auto Club Raceway at Pomona this weekend, and a first-ever win at the traditional finale would ensure Capps would walk away with his second career Funny Car world championship in the loaded Funny Car class.

He currently leads Don Schumacher Racing teammate and defending world champ Matt Hagan by 58 points heading into Pomona, but with the points-and-a-half scenario in place for the Auto Club NHRA Finals, round-victories are worth 30 points this weekend. That means Capps’ advantage is less than two rounds heading into Pomona, putting a major must-see spotlight on the Funny Car championship race. For a driver who’s done it all, including winning twice this year — with one of them coming in Pomona in mid-summer — and claiming a world championship in 2016, a World Finals victory would be the perfect capper to 2021 in his 11,000-hp NAPA Auto Parts Dodge Charger SRT Hellcat.

“One thing I’ve known is ‘Guido’ (co-crew chief Dean Antonelli) and John Medlen have always done well at the World Finals, so I’m leaning on that and hoping it continues,” Capps said. “I’ve never closed the deal at the season-ending race, so that would be especially big to do it this weekend. The championship is looming, and we’re going to keep trying to do what we’ve done all year. We have to approach it like normal, but this would mean the world to win another championship. It’s been a really crazy year in Funny Car, and whoever wins this year, they will definitely have earned it.”

Doug Kalitta (Top Fuel), Jack Beckman (Funny Car), Jeg Coughlin Jr. (Pro Stock), and Jianna Salinas (Pro Stock Motorcycle) won the most recent Auto Club NHRA Finals, which took place in 2019. This year’s event will be televised on FOX Sports 1 (FS1), including live final eliminations coverage starting at 4 p.m. (ET) on Sunday. It is the last of seven races in the Countdown to the Championship in Top Fuel and Funny Car, and Capps knows nothing is even close to being decided in a class that’s featured a remarkable number of lead changes this year. 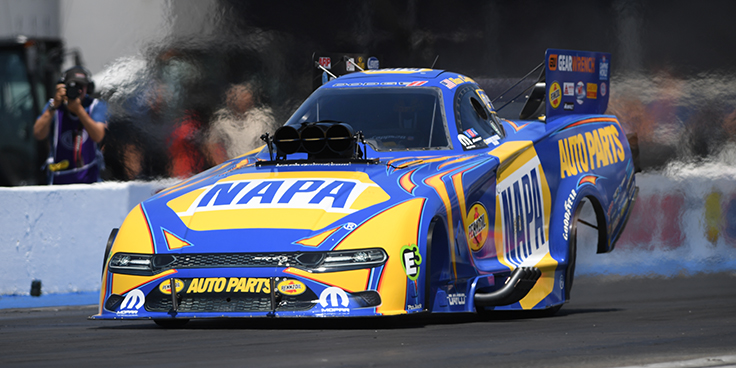 Capps has led at four different times this season, recapturing the points lead in Bristol and holding it for back-to-back races for the first time this year thanks to his runner-up in Las Vegas. But with the wild nature of the class in 2021, nothing is guaranteed in Funny Car, and Capps knows he has work to do. Along with Hagan, Capps will also have to hold off the likes of Cruz Pedregon, who won in Las Vegas to get within 83 points of Capps, J.R. Todd, who is 138 points back, John Force, Bob Tasca III, Robert Hight, Alexis DeJoria, and Tim Wilkerson. It’s a loaded group in the class, but Capps can rely on a consistent approach that’s served him well throughout the season.

“I definitely attribute the position we’re in to the consistency we’ve had all year,” said Capps, who has 68 career wins. “We’ve been very consistent in qualifying and on race day, and it’s been fun to navigate where we’re at right now. This has been one of the most closely matched years we’ve ever had in Funny Car, so it’s definitely been an interesting year, but I’ve been through a lot of championship chases. It seems like it’s going to come down to the last day of the last race to win a championship, so it’s going to be exciting.”