Unlike pretty much any other year, Robert Hight pulled into Auto Club Raceway at Pomona without a chance to win the Camping World Drag Racing Series Funny Car championship, but he's determined to end his star-crossed season with a victory at the event and the track sponsored by his longtime backer.
13 Nov 2021
Phil Burgess, NHRA National Dragster Editor
Feature

Unlike pretty much any other year, Robert Hight pulled into Auto Club Raceway at Pomona without a chance to win the Camping World Drag Racing Series Funny Car championship.

The three-time world champ, however, is determined to end his star-crossed season with a victory at the event and the track sponsored by his longtime backer, the Automobile Club of Southern California, and leading after the first day of qualifying is a good start towards that goal.

As many will remember, Hight, president of John Force Racing, his eponymous boss, and Brittany Force all sat out the majority of the 2020 season after the COVID pandemic began. When they returned in 2021, more than a year after their last competition runs, Hight and his Jimmy Prock-led team showed no signs of rust, scoring a runner-up at the season-opening Amalie Motor Oil NHRA Gatornationals.

He was in second place and hasn’t seen that perch since, sliding as low as ninth but hovering around the middle of the Top 10 thanks to wins in Houston and Sonoma. Then the proverbial wheels fell off the Auto Club Chevy in the summer, losing in the first or second round at six of the next seven events.

“At first I was kind of worried about us taking basically the whole year off last year; you know, did we fall behind?” he admitted, “We showed up at Gainesville, and we go to the finals. We were testing but we were the quickest car there. So, it was like, ‘Well, we didn't forget how to do this,’ but over the course of the season and all the different conditions that you race in, maybe we did fall behind. 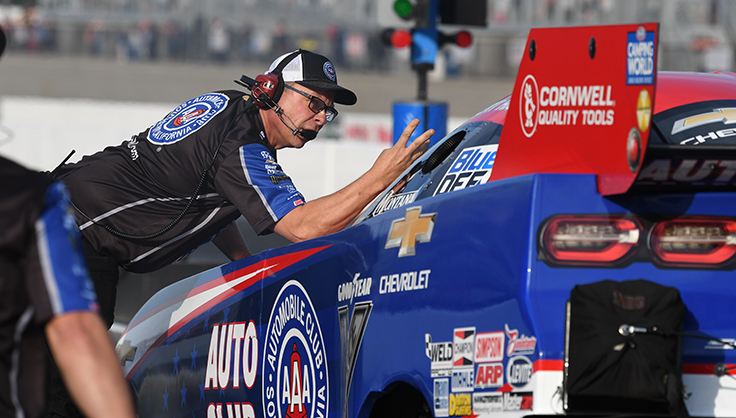 “It was mostly the clutch setup; it's not very friendly. We don't have a very big tuning window. It has to all cooperate every run for it to go. And if it doesn't, it tips it over. The clutch is the evil that we all fight for all these years, and they haven't changed. We have to have a combination that can deal with inconsistencies, and in 2017, ‘18, and ‘19 we had that. We made a lot of great runs, set records, and won a lot of races, and this year's been kind of a letdown.”

The team began its renaissance at the Texas NHRA FallNationals where they qualified No. 1 and they reached the semifinals at the most recent event, two weeks ago in Las Vegas. And now they want to finish big at JRF’s hometrack.

“This is this is the race that you can win and celebrate for the longest period of time; it kind of sets the tone for the offseason,” Hight said. “I told my guys [Friday] morning, ‘You know, this isn't much fun. The last three years that I've been here to Auto Club Raceway, I've been in contention for a championship, and we finished one, two, and one, and to be here this year, and really not in contention, this isn't where we want to be next year. So, remember this feeling. And let's make sure that we're not in this position next year at this time.’

“I don't want to make any excuses. I feel that we have the best team out here. Jimmy Prock, anybody would want that guy. So we just have to do a better job. And I want to get this season over but I want to do with a win. And I can't wait for the next season to begin to redeem ourselves.”