The Road Back: NHRA charted a successful return in 2021 after tough 2020

A sense of a new normalcy blessed the 2021 NHRA season with the community enjoying a spirited comeback from the scrappy yet shortened 2020 season so dramatically affected by the COVID-19 pandemic.
31 Dec 2021
Phil Burgess, NHRA National Dragster Editor
Feature

A sense of a new normalcy blessed the 2021 NHRA season with the community enjoying a spirited comeback from the scrappy yet shortened 2020 season so dramatically affected by the COVID-19 pandemic.

New teams and stars emerged, the racing schedule blossomed, sponsors climbed on board, and fans began to return to the grandstands after a year of caution and restrictions kept them instead glued to NHRA on FOX coverage of 2020’s 11-race national event campaign. Overall 2021 viewership on FOX was up 3% over the shortened 2020 season and 5% over 2019 and yielded the best season average since 2018.

Buoyed by the late-2020 partnership with Camping World, the sport as a whole toughed out the year with an optimistic eye towards 2021 and was rewarded with a fantastic and forward-looking season.

Throughout the season, NHRA celebrated its 70th anniversary with special television, web, and print features documenting the history of the NHRA over seven decades.

While the 2021 NHRA Camping World Drag Racing Series national event schedule boasted 20 races, it still had some pandemic-related hangover. Instead of launching the season in Pomona, as it has since 1961, local regulations in Southern California prevented the Lucas Oil NHRA Winternationals presented by ProtectTheHarvest.com from taking place in its traditional mid-February time frame, and the season opener was moved to Gainesville at the Amalie Motor Oil NHRA Gatornationals.

The Winternationals were eventually contested at Auto Club Raceway at Pomona in decidedly un-winter-like conditions in late July, and other mainstay events in Phoenix and Richmond were not part of the calendar due mainly to the pandemic but will return in 2022. The NHRA Thunder Valley Nationals in Bristol, a traditional Father’s Day favorite, was moved to October and became part of a first-ever seven-event Countdown to the Championship slate. 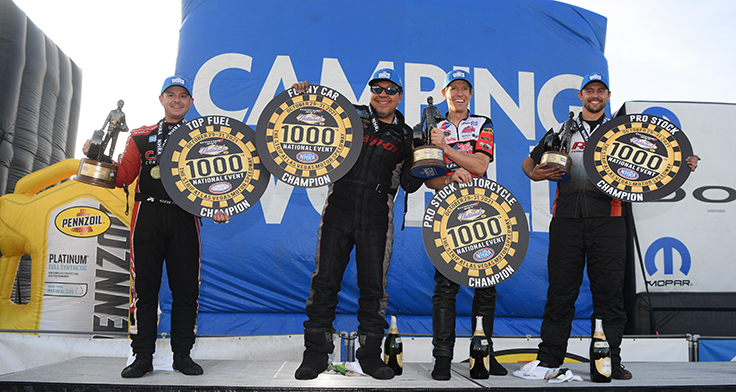 The penultimate event of the season, the Dodge//SRT NHRA Nationals at The Strip at Las Vegas Motor Speedway, marked another milestone for NHRA Drag Racing as it was the 1,000th NHRA national event staged, a legacy that began in Great Bend, Kan., in 1955. Special Wallys and commemorative 1,000th-event poker chips were handed out at what truly was a memorable event.

Fans also enjoyed a memorable outing at longtime national event venue, Atlanta Dragway, which hosted its final NHRA Southern Nationals before closing at the end of the year.

After a year’s absence, the 2021 season finale returned to Auto Club Raceway at Pomona, where Steve Torrence, Ron Capps, Greg Anderson, and Matt Smith all clinched their Camping World championships on the final day of the season.

Anderson’s championship was his fifth and wrapped up a season in which he also scored his 98th career win to surpass mentor Warren Johnson as Pro Stock’s winningest driver. 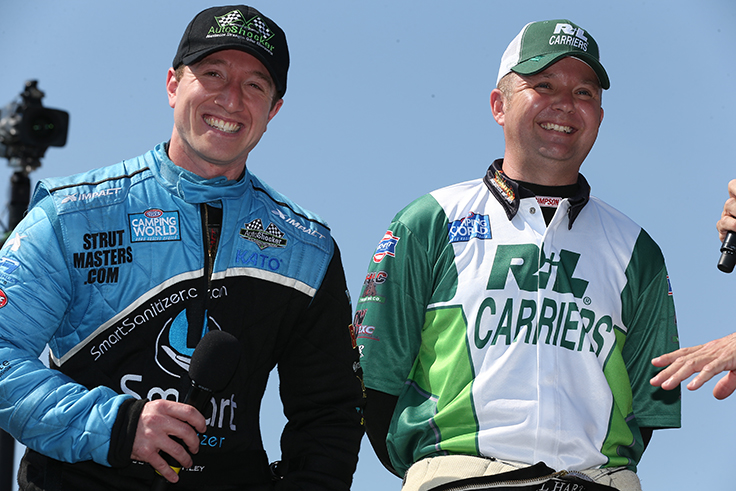 While all of the champions were veterans and repeat titlists, the 2021 season welcomed a throng of newcomers, including Dallas Glenn and Josh Hart, who staged what is probably the most epic battle of all-time for the NHRA Rookie of the Year crown before Glenn was named the winner. Eleven drivers were eligible for the award – including Krista Baldwin, granddaughter of drag racing legend Chris Karamesines – and many others throughout the season announced their intentions to compete next year, including second-generation Funny Car driver Travis Shumake.

The 2022 season will also mark the debut of Tony Stewart Racing as the championship-winning racecar driver announced he will field two entries – one in Top Fuel for Leah Pruett and one in Funny Car for Matt Hagan.

The 2022 season will also see the return of eight-time Top Fuel champ Tony Schumacher to full-time status and the return of 2017 Pro Stock champ Bo Butner as well as newcomer Camrie Caruso as part of a two-car Pro Stock effort. 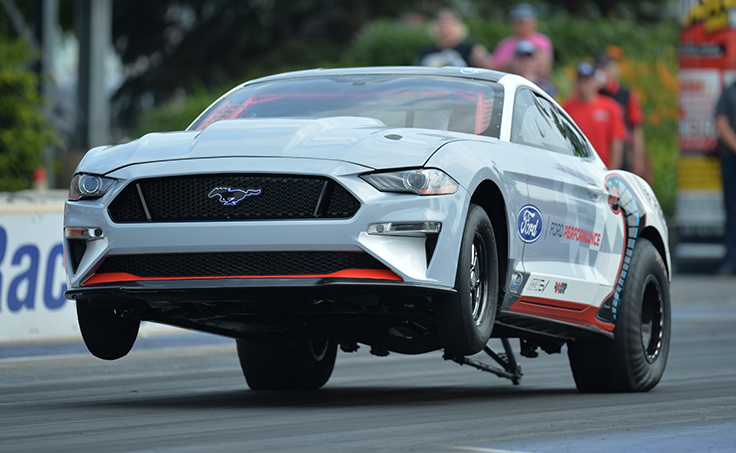 NHRA also got plugged into the electric-vehicle current in 2021, playing host to Ford’s amazing Cobra Jet 1400, which made exhibition runs in the low-eight-second range at 170 mph at multiple events, and added an all-new electric-vehicle class in the NHRA Summit Racing Series as part of an electric racecar initiative, bringing automakers, racers, and aftermarket together.

NHRA also announced the formation of a new Factory X (FX) exhibition racing class for the 2022 season that will bridge the gap between Factory Stock Showdown and Pro Stock. 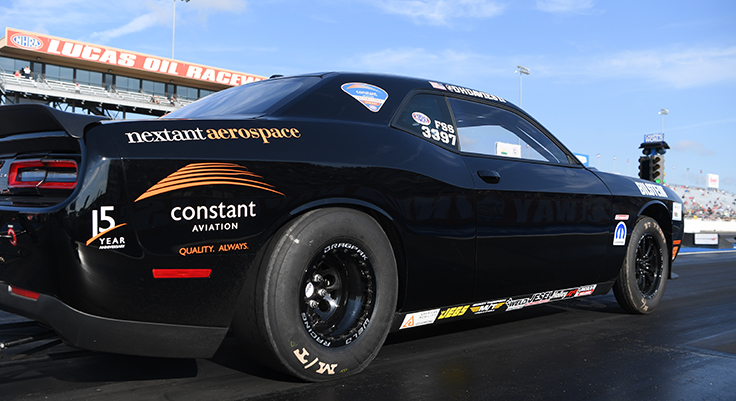