Kyle Koretsky is looking forward to racing at historic Auto Club Raceway at Pomona for the first time in his young career, which is reason enough for the rising Pro Stock star to want to do well at this weekend’s Lucas Oil NHRA Winternationals presented by ProtectTheHarvest.com.
30 Jul 2021
Posted by NHRA.com staff
Feature

Kyle Koretsky is looking forward to racing at historic Auto Club Raceway at Pomona for the first time in his young career, which is reason enough for the rising Pro Stock star to want to do well at this weekend’s Lucas Oil NHRA Winternationals presented by ProtectTheHarvest.com. But the fact it’s also his sponsor’s race has Koretsky even more excited for his Pomona debut in his Lucas Oil Chevrolet Camaro.

Koretsky made his Pro Stock debut after the NHRA Camping World Drag Racing Series resumed racing in July last year, meaning last weekend’s race in Sonoma was a whole new experience. That sentiment holds true for this weekend as well, and Koretsky will look to build on qualifying second in Sonoma as he tries to pick up his first career victory in the class.

“I look forward to every single race, and I’m really looking forward to this one,” Koretsky said. “Racing is my life, and I’m definitely there to perform. Car-wise, we’ve got a great hot rod right now. Driver-wise, I really struggled last weekend cutting a light. I’m working on that, and I’ll head to Pomona with a lot of confidence in the car. I’ll go to Pomona as calm and as relaxed as I can, and with a clear head, and we’ll look forward to a good outcome.”

Doug Kalitta (Top Fuel), Jack Beckman (Funny Car), and Jeg Coughlin Jr. (Pro Stock) were last year’s winners of a race that will be televised on FOX Sports 1 (FS1) and FOX, including finals coverage beginning at 4 p.m. ET on FOX on Sunday, Aug. 1. It marks the 10th race of the 2021 NHRA Camping World Drag Racing Series season and the final race of what has been a memorable three-race Western Swing. It’s also the first time the NHRA will race at Pomona in the summer, adding another special note for the weekend. 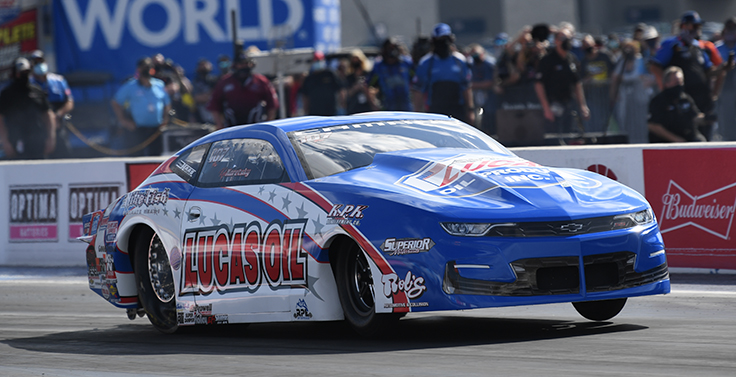 To get his first career win, Koretsky will have to race past his KB Racing teammate and points leader Greg Anderson, who has enjoyed a huge amount of success in Pomona, defending world champ Erica Enders, Sonoma winner Aaron Stanfield, who has two victories in the past three races, standout rookie Dallas Glenn, Mason McGaha, Troy Coughlin Jr., and Deric Kramer. Currently eighth in points, a big weekend for Koretsky could pay off down the road as well.

“This year, we’re trying to stay humble and race each race, but getting into the right position for the Countdown to the Championship is huge and something you’re starting to think about,” Koretsky said. “We just have to keep trying to make as many clean runs as we can. All those points really start adding up now, and I want to give my team the best shot I can. If we can keep the car where it’s at, and I can get myself going, we can have a winning combination and really show what this car can do.”