Red-hot John Force looks to keep rolling, put on a show in Norwalk

John Force Racing doesn’t look as though as it missed most of the 2020 season and the organization, led by iconic Funny Car driver John Force, will now look to put on a show at a track starved for NHRA action.
25 Jun 2021
Josh Hachat
Feature

John Force Racing doesn’t look as though as it missed most of the 2020 season and the organization, led by iconic Funny Car driver John Force, will now look to put on a show at a track starved for NHRA Camping World Drag Racing Series action, Summit Racing Equipment Motorsports Park.

The facility didn’t hold a race a year ago due to the COVID-19 pandemic, and Force and his team sat out most of the year as well. But Force is back in style, winning two of the past three Funny Car races in his 11,000-horsepower PEAK BlueDEF Chevrolet Camaro SS and he’s ready to put on a show at this weekend’s Summit Racing Equipment NHRA Nationals. It’s always an event big on pomp and circumstance, and an annual fan favorite and Force is thrilled to once again race in front of the huge area fanbase.

“I always love coming to Norwalk,” Force said. “The Bader family, they always put on a great show. We’re going there with a full crowd, with everything having been shut down, the fans need the excitement, they need the entertainment. That’s what we’re going to give them. Header flames, 330 mph, 11,000 horsepower, how much better can it get?” 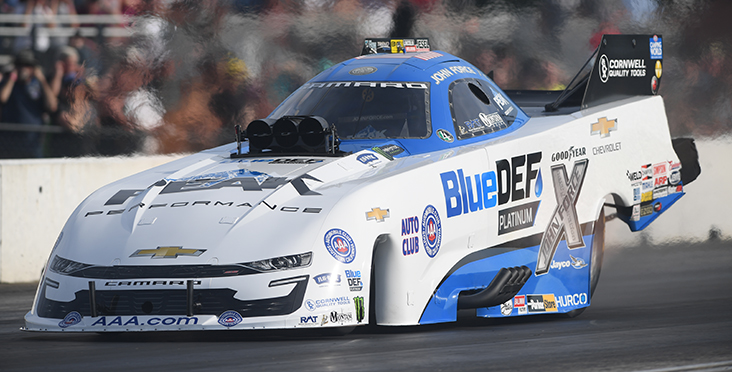 Steve Torrence (Top Fuel), Bob Tasca III (Funny Car), Chris McGaha (Pro Stock), and Andrew Hines (Pro Stock Motorcycle) were winners of the 2019 event. This year’s race will be televised on FOX Sports 1 and FOX, including live final eliminations coverage starting at 2:00 p.m. (ET) on FOX on Sunday, June 27. It is the seventh race of the 2021 season and JFR will look to keep rolling in a loaded Funny Car class.

Sandwiched between Force’s victories in Charlotte and Epping is Robert Hight’s Houston victory, putting the team on a good path heading into summer. Keeping it up won’t be easy, but Force, who has one previous Norwalk win, is eager for the challenge that includes racing against the likes of points leader Tasca, defending world champ Matt Hagan, Cruz Pedregon, Tim Wilkerson, Ron Capps, Gainesville winner J.R. Todd, Alexis DeJoria and Terry Haddock.

“John Force Racing, we’re running good,” Force said. “The whole team, myself with PEAK BlueDEF, Robert over there with AAA Ohio, and Brittany with Flav-R-Pac and Monster Energy. It sure doesn’t look like we took a year off. Our crew chiefs are dialed in, our teams are working well together. It’s all working for us. Now we have to stay consistent, we want to stay up there in the points, be in the fight, but we have to keep it going to fight for the championship and that happens in the Countdown. We’ll be ready, we’ll be good.”