Back in 2007, Matt Smith won consecutive Pro Stock Motorcycle races in Denver and Sonoma, making it as close as someone could get in the two-wheeled category to sweeping the Western Swing because the class never raced in Seattle.

Eddie Krawiec has since accomplished that same feat twice, and Andrew Hines did the same in 2019. The teammates took it a step further in 2015 and 2019, when they each won the NHRA Pro Bike Battle in Sonoma, making it a min-sweep of the class’ version of the Western Swing.

But in 2021, all the riders in the class will get an opportunity to compete in all three races in the Western Swing, offering the first official chance for a Pro Stock Motorcycle rider to win a trio of events on the famed and rigorous trip out west. 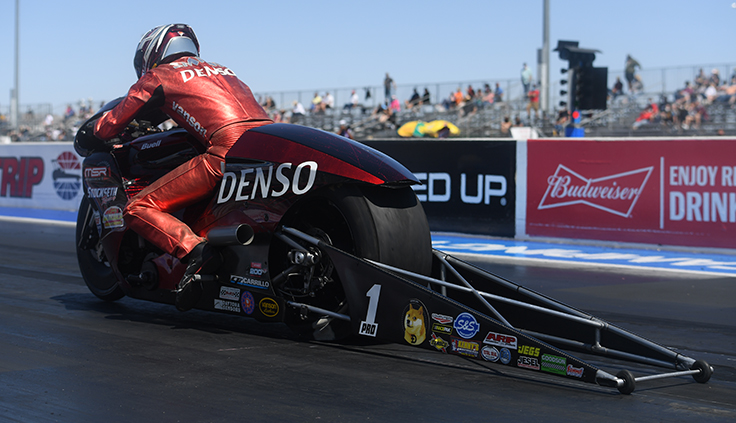 “It would be pretty neat if you could get that done,” Smith said. “It’s the first time it’s a true Western Swing for us, so it should be pretty interesting. But you have to win that first race in Denver before you can do anything.”

Smith is certainly correct about that, as the three-race trek starts this weekend in Denver at the Dodge//SRT Mile-High NHRA Nationals presented by Pennzoil and continues with races in Sonoma and Pomona. It’s not the typical Western Swing, with Pomona replacing Seattle this year, but the opportunity remains real for someone.

Hines joked his team brought out dustpans after his feat in 2019, as opposed to the full brooms the select few teams have showcased after winning three straight races, and he’s eager to try and take it a step further this year. 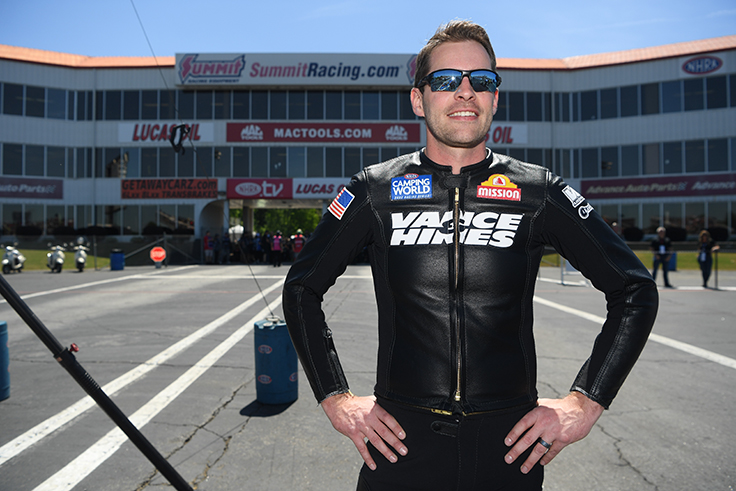 “We’ve had our min-sweeps in the past, but to win three full-size Wallys would be pretty special,” Hines said. “I’d like to feel more confident, but this class is just so tough right now. You just never know who is going to win. There are so many solid bikes out there.”

Smith maintains a step ahead of everyone this year, picking up his second win of the year at the most recent event in Norwalk.

A self-proclaimed slow starter, the defending champ said he’s ahead of schedule heading to Denver. But knowing the challenging conditions that present themselves at Bandimere Speedway, he’s not about to look past that race for the ultimate dream of winning three straight races. Smith would also consider it just as sweet if Matt Smith Racing, a group that also includes Angie Smith and Scotty Pollacheck, was the only team to win on the Western Swing.

“The key is you can’t push your stuff too much at the first race in Denver,” Smith said. “Denver is always the hardest on parts, but don’t push everything to the max, you should be fine for Sonoma and Pomona.

“We’re going to do our best to try to win at Denver, and if that happens, we’ll try to do the same at Sonoma. But if our team could win all three, that would mean a lot.”

It’s certainly no easy task, as evidenced by the fact there have only been seven racers who have accomplished it in NHRA history.

Hines and Krawiec have been dominant in Denver over the years, combining for nine career wins. But it’s also their first race at Bandimere Speedway on their new Vance & Hines Buells, and Smith just came off of setting a track record in Norwalk.

Still, Hines is looking forward to the challenge of racing three consecutive races out west, especially because it’s the first appearances in Denver and Sonoma in two years due to the COVID-19 pandemic.

“I think we’re going to have a huge turnout,” Hines said. “It’s time for the people out there to enjoy something good, and there’s nothing better than watching a whole lot of horsepower going down the dragstrip. It’s going to be a good time, but it’s going to be a strenuous three weeks. We’ve got all our bullets loaded up, and we’ll see what we can do.”