Following a first-round loss last weekend in uncharacteristic fashion, the best thing for defending back-to-back Pro Stock world champ Erica Enders is to get right back in the car, which she will do at this weekend’s 34th annual Mopar Express Lane NHRA SpringNationals presented by Pennzoil at Houston Raceway Park. It's also at her hometown track is just an added bonus for the four-time NHRA Camping World Drag Racing Series champ.

Enders loves the chance to put on a show where her drag racing career started, and there will be plenty of family and friends on hand to watch the fan-favorite driver try to win for the third time in Pro Stock in Houston. After a first-round loss last weekend in Charlotte, it’s also a chance to get that bad taste out of her mouth in her Melling Performance/Elite Motorsports Chevrolet Camaro.

“It’s nice to get another shot at things and redeem yourself, and I think that’s what we’re going to do,” Enders said. “Being it’s my hometown track and we’ve won here before, it’s a track that’s been good to us. I’m lucky to have the best crew chiefs and everyone is working hard to get back on track. I really love going home and it’s always fun to race in front of a hometown crowd. We’ll have lots of family and friends there, and I’m excited about that.” 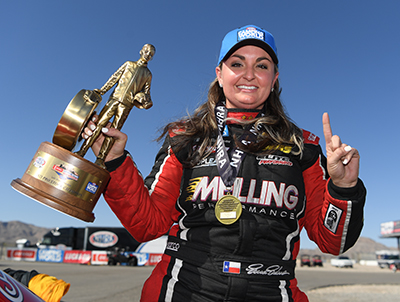 It’s been a solid start to the season for Enders, who is currently second in points behind Greg Anderson. She won in Las Vegas last month, earning her 30th career win, but Enders isn’t completely satisfied, especially after failing to advance to the second round at last weekend’s four-wide race in Charlotte.

Enders lost on a holeshot in Charlotte, which is rare for one of the top drivers in the sport, and the team is still looking for more consistency out of the car. They stayed and tested in Charlotte on Monday, and Enders believed it was a positive step in regaining their mojo and getting things moving in the right direction

That has Enders hopeful for success in Houston, but she’ll need to get past a top-notch Pro Stock lineup that include Anderson, Charlotte winner and rookie Dallas Glenn, Troy Coughlin Jr., Mason McGaha, Aaron Stanfield, who won in Pro Stock in Houston last year, Matt Hartford and Deric Kramer.

“It has not been the start we were hoping for and we’re working hard to get our act together, myself included,” Enders said. “I’ve lost on two holeshots this year and that shouldn’t have happened. Every round matters and you’ve got to fight every time out there. I haven’t shown that on reaction time and we haven’t shown that on performance.

“I thankful for my team’s positive attitude and we’re heading in the right direction after Monday’s test session. We were all mad about losing in Charlotte, and I know I’m going to race with a different mentality.”

To purchase tickets, call 281-383-7223 or purchase online at www.houstonraceway.com.