Dallas Glenn was incredible on the starting line en route to the final round at Topeka. Facing off with KB Racing teammate Kyle Koretsky in the championship round, Glenn decided to dial it up even more.

The standout Pro Stock rookie went a perfect .000 on the starting line, holding off Koretsky at the finish line in his RAD Torque Systems Chevrolet Camaro with a run of 6.681-seconds at 205.01 mph to win the Menards NHRA Nationals presented by PetArmor at Heartland Motorsports Park. Koretsky was a quicker 6.651 at 206.13, but was no match for Glenn’s perfect light. Glenn also became just the sixth Pro Stock driver in NHRA history to win the final round with a perfect reaction time.

“It's hard to put this win into words,” Glenn said. "But it's just like this is like dream come true. This season, it's taught me a lot. I've had a lot of highs and I've had some lows where I've been struggling and we've gotten a little taste of everything this year.

“I felt like I did my job really well and the car is just working really good right now. I'm really excited for the Countdown coming up here and Indy next because we’ve got a really fast car for it." 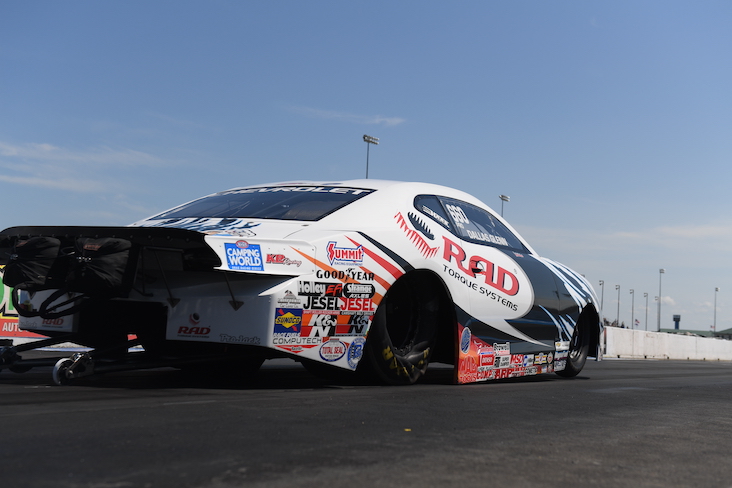 It had already been a banner rookie season for Glenn even before arriving in Topeka, but the young standout raised his game even more this weekend.

After qualifying fourth, Glenn reached his third final round on the strength of round wins against Deric Kramer, Matt Hartford and No. 1 qualifier Troy Coughlin Jr. He was lethal on the starting line, as usual, all weekend, posting an impressive .006 in the semifinals against Coughlin.

That set up the teammate versus teammate duel in the final round, pitting a pair of young rising stars in the Top Fuel class. Glenn unleashed a perfect reaction time and the celebration soon ensued as he moved to fourth in points.

“I know that he had lane choice and I was going in the right lane and my car was not as happy over there, and I know that Kyle has been really good (on the starting line),” Glenn said. “I knew that he's got a really fast car and he was going to be really on it because I know how bad he really wants that number one. So I just kind of went in there and I rolled in a little bit quick and it almost cost me, but I just tried to hit it as best I could. And it was a little bit of a long tree which usually I hit them a little better.”

It was by no means a lost weekend for Koretsky. His second career final round and first in 2021 included victories against Rodger Brogdon, Greg Anderson and defending world champ Erica Enders. Both the win against Anderson and the victory against Enders came on holeshots, as Koretsky continues to make big strides in his second season.

He’s come as of late, too, moving to sixth in points after sitting ninth just four races ago.

Pro Stock returns to action at the U.S. Nationals in Indy for the final race of the regular season.