It’s been more than 10 years since Matt Hagan made the first three-second Funny Car run, but that didn't take any of the excitement away for the Creasy team, who made their first-ever three-second pass during the third qualifying session at the Texas NHRA FallNationals.
09 Oct 2021
Phil Burgess, NHRA National Dragster Editor
Feature

It’s been more than 10 years since Matt Hagan made the first three-second Funny Car run, a pass that these days is as common as spark plugs, yet still remains the goal for a lot of the smaller teams.

Through three rounds of Funny Car qualifying at the Texas NHRA FallNationals, there have been 18 three-second runs and one of them, a 3.992, means more to one team than Robert Hight’s fielding-leading 3.878-second pass.

Yes, race fans, after years of trying and getting as close as a 4.000 in Indy last year, Dale Creasy Jr. and the TekPak team finally have notched their first three-second run.

Creasy credits a new six-disc clutch they started running in June at the suggestion of their advisors at John Force Racing.

“We run their heads, manifold, blower, and cam, so it made sense to switch to the same clutch they’re running,” said Creasy, a second-generation nitro racer who’s been behind the wheel since 1997. “It's just been about figuring it out. The Force camp and has helped us tremendously and they look at all our runs.”

“We've gotten 4..0s numerous times, even with the five-disc, but the speed wasn't there. This one just got more potential. We just had to figure out because our clutch discs aren't the same as theirs, so there was a little learning curve.” 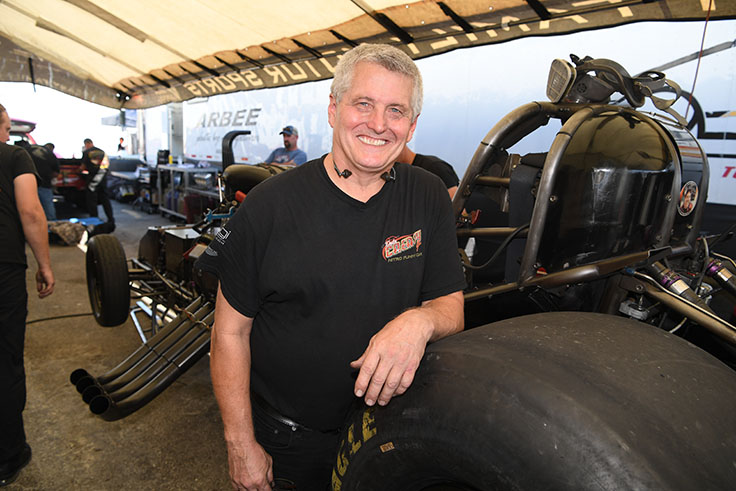 The team may have packed up for the season after the NHRA Midwest Nationals two weeks ago until the car gave them a hint, running three-second numbers up to half-track before the engine lost 40 gallons of fuel volume but still ran 4.02.

“That run is why we came here,” he admitted. “We knew it was in it. I didn't want to put it away for the winter thinking about ‘What if?’

“[Del] Worsham poked his head under the body last night and said, ‘You’re gonna run a three one of these days, dude. And when it comes, they'll come more often.' And I said 'thank you.'

“That’s how we work. We don't mess with people, we stay in your own pit and work on our stuff, and the other teams they see that, and I think you get respect.”

The run was made even more special to the team as Tony Beyer, who has supported the Creasy family’s team for 25 years through his TekPak company, was on hand to see it.

Even though they’re solidly in the field in the No. 11 spot, they’ll still come to the starting line for the final qualifying session prepared to run if they have to.

“We're not going to run it if we don't have to, but we're gonna go up and be ready to run,” he said. “It's respect for the guys that aren't in because i not going up saying ‘You can't do that.’ We're gonna be ready.”