Tripp Tatum has had his name on the side of a racecar before, but usually just by the cockpit of a rented car. The body panels on the brand-new car that he rolled out of the trailer in Indy are emblazoned with Tripp Tatum Racing, signifying his graduation from driver to driver/owner.
04 Sep 2021
Phil Burgess, NHRA National Dragster Editor
Feature

Tripp Tatum has had his name on the side of a racecar before, but usually just by the cockpit of a rented car. The body panels on the brand-new Morgan Lucas Racing-chassised car that he rolled out of the trailer in Indy are emblazoned with Tripp Tatum Racing, signifying his graduation from driver to driver/owner.

The Maryland-based racer, who made strong showings in 2016 and 2017 at the wheel of the Lagana brothers’ Nitro Ninja dragster, qualifying at all six events he attended, is making his first Top Fuel start since the penultimate race of the 2017 season in Las Vegas but now he’s wearing both hats.

“It’s a bit overwhelming at times, because now I'm not only driving it but now I'm an owner, too, and learning about how to race,” he admitted. “It’s been my goal for a long time, since the early ‘90s when my dad and I almost had a deal together, but it's like anything, it takes time and some people-prodding. In the meantime, I decided to buy some parts from two teams and some new stuff, so I’m deep in good parts. It was just getting it together and finding the people that can help. It's been a good path. That's really one reason why it's taken so much longer.” 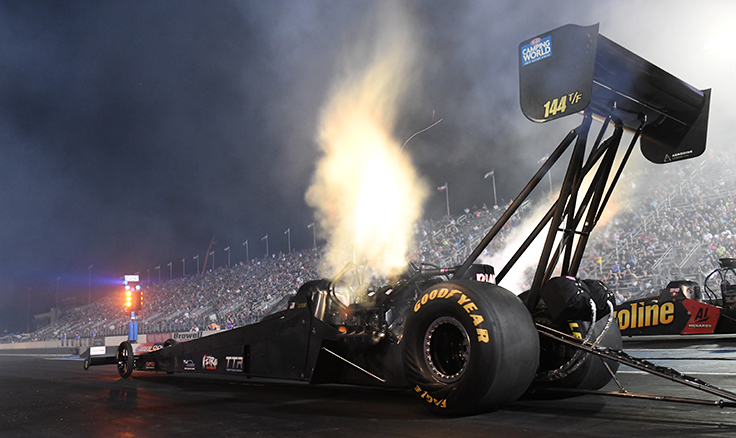 The Laganas certainly have a hand in this car, too, one that goes beyond the loan of their trailer while Tatum’s gets revamped at the MLR shop.

“This car is completely influenced by them,” he said. “It’s pretty much a carbon copy of what Steve [Torrence] has.”

Tatum also has a collection of some of the most experienced tuners in the business to help him this weekend in Aaron Brooks, John Stewart, and Tony Shortall. Still, the plan is to take baby steps. The car made some short squirts a few weeks ago here, just to make sure that all of the systems are working correctly.

After the U.S. Nationals, Tatum hopes to run at least two more races this season, perhaps ore if the funding comes.

“We’ll probably either Charlotte or St. Louis and then probably Bristol,” he said. “I'm 100% self-funded at this point, so it's on me to go further, to at least pay for airlines, diesel, and hotels because that stuff adds up.”

Tatum, who scored his first career round win in his 2017 debut at the Gatornationals, also qualified for the U.S. Nationals that year with his first career 3.7-second pass and hopes for similar or better success at this year’s “Big Go.”

His opening pass Friday night of 3.87 was just the start of what he hopes is something great.