Spencer Massey impressed in a first round upset of Leah Pruett to open eliminations on Sunday in Top Fuel, but it wasn't all positives for the veteran. After going 3.745 at 328.46 to beat Pruett, who went up in smoke almost immediately, Massey suffered a huge top end explosion. It was an unfortunate blow to the team, but Massey praised the work of everyone on the team.

He has enjoyed running on a part-time basis with Pat Dakin and the team has put together a number of good showings, including this weekend in Bristol. Up next is a matchup with Brittany Force and despite the huge blow-up to open the day, Massey believes his team will be ready in the second round.

"It's going to be really interesting," Massey said. "That was a massive explosion going to be interesting to see if we can get it back together. We've got the right guys to get it done. I felt it at the finish line, but you never know in Top Fuel when there's nitro in the tank. Bristol is beautiful race track and I just love being here."

The carnage continued in a wild first round in Top Fuel as teams worked to adapt to the cool conditions on Sunday in Bristol. Josh Hart, Massey, Brittany Force and Billy Torrence all had big explosions down track, with Massey, Force and Torrence advancing despite the fireworks.

It was the second blow up of the weekend for Torrence, who had to feel like he was experiencing deja vu on Sunday. Still, the team will keep moving forward heading to the next round.

"That was just like the last one. It looks like the same type of damage from the first blow up, but those Capco boys will have things ready for the next round," Torrence said.

That felt really good. It was do or die and we have to take everybody out on our side of the ladder. 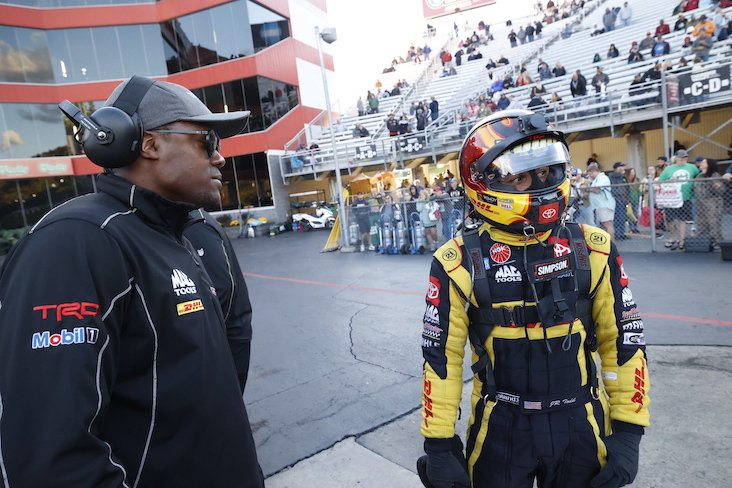 The championship mix got even more interesting in Funny Car thanks to a huge run from J.R. Todd in the opening round of eliminations. After not getting down the track at all through qualifying - topping out at just 150 mph - the team pulled out something massive against points leader Matt Hagan.

Todd went 3.924 at 324.90, knocking off Hagan's 3.958 and giving a few more drivers a glimmer of hope in the title chase. Hagan entered the weekend 33 points up on Ron Capps, who won his opening-round matchup, and the likes of John Force, Cruz Pedregon and Todd could make a major move with a big weekend. Todd put together the impressive start and will now look to continue that in the next round against Force.

"We just have to keep doing what we did there," Todd said. "Leaving on Matt, that's hard to do. We've got our work cut out, but you can't count out this team and that was a hell of a run. To see that win light on, it caught me by surprise." 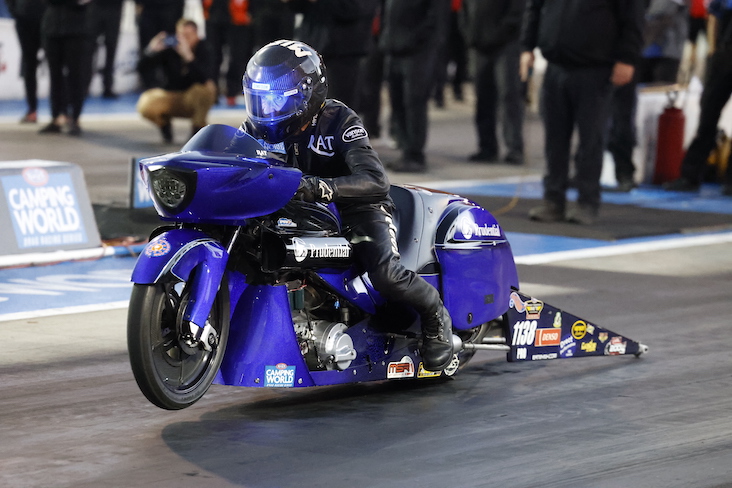 Ron Tornow picked up a milestone victory in Pro Stock Motorcycle and put a huge damper on Steve Johnson's championship hopes in the process.

Tornow picked up his first career round win in the class, going 6.984 at 187.83 to upset Johnson, who slowed almost immediately to cap off an incredibly frustrating weekend for the championship hopeful. He only made one down the track, but Tornow made sure to take advantage. It was a surreal moment for him and he basked in it all on the top end.

"It's indescribable," Tornow said. "We've worked so hard and we started the tuning ourselves. That was our best 60-foot time and the second time in the 6.00s. I've got to thank my team for all the work they've done. This is the most amazing thing in the world."

Johnson entered the weekend just eight points behind Smith, but that will change in a huge way, as Smith went 6.853 to win his first round matchup. Angelle Sampey made the run of the round, going 6.821 at 195.62 to beat teammate Andrew Hines and keep her title hopes alive and well. 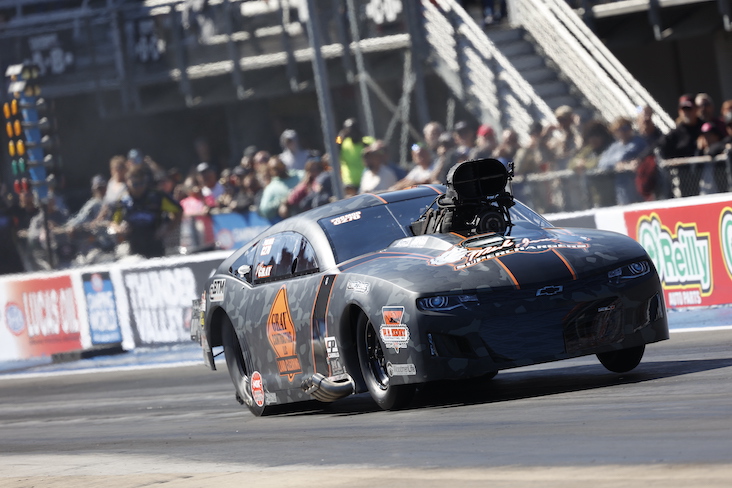 The upsets continued in the first round of racing in Thunder Valley, this time in the E3 Spark Plugs NHRA Pro Mod Drag Racing Series. Rickie Smith had been a step of anyone through qualifying, taking the No. 1 spot with a 5.708 under the lights on Saturday.

But a new day brought out a huge performance from rookie J.R. Gray, who sent Smith home much earlier than expected with the best run of the weekend. Gray went a 5.699 at 251.53 in his blown Camaro, picking up a huge round win. He'll get a bye into the semifinals, giving him the chance to put together a huge weekend. 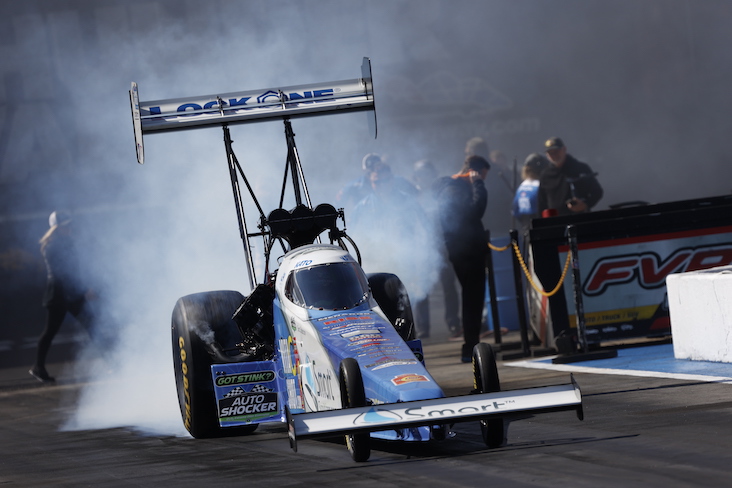 To win last week in Dallas, Justin Ashley had to go through both Capco Contractors dragster.

He's going to have to do the same this weekend in Bristol and he's halfway there to accomplishing just that. Thanks to a small holeshot, Ashley took out Billy Torrence in the second round in Thunder Valley, as his 3.708 at 333.33 held up against Billy's 3.705. Next up is Steve, who went 3.680 at 333.00 in his second-round bye run.

Of course, a week ago Ashley knocked off Steve in a thrilling final round in Dallas, and he also slipped past the points leader at the opening round of the Countdown in Reading.

It sets up a massive semifinal showing in Bristol and will be a must-watch pairing. The other semifinal will feature Brittany Force, who went a round-best 3.671, taking on Mike Salinas. 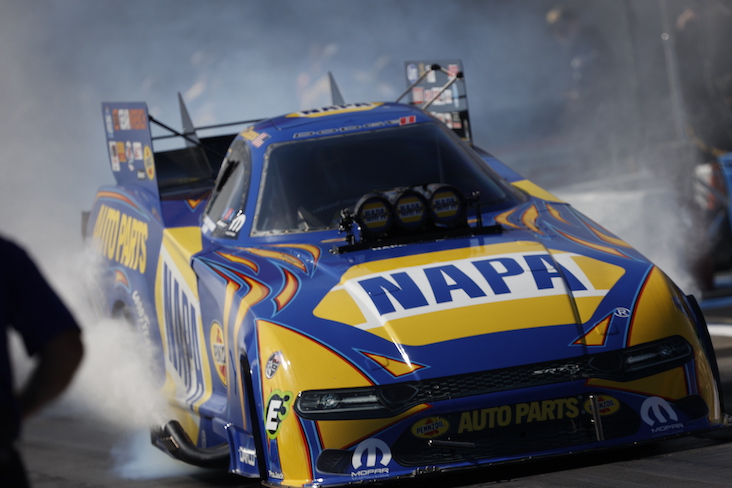 The second round of Funny Car featured two huge side-by-side duels and gave us a new points leader in the process.

Ron Capps edged out Cruz Pedregon in a thriller, going 3.919 to Pedregon's 3.920, sending him into the points lead and into the semifinals as well. Following his victory in Dallas, Capps now has six straight round wins and joked that his second-round victory almost felt like an out-of-body experience.

"We've got make hay while we can," Capps said. "That was a great matchup. I'll just keep doing what I'm doing and I'm having a blast."

If that feeling lasts remains to be seen. He goes from one huge matchup to another, as J.R. Todd is trying for a late-season run. He knocked off John Force with the quickest round of eliminations, going 3.916 at 328.78 to slip past John Force. If he can send Capps home as well and take the win, Todd would knock off three championship hopefuls in one day - pretty much the epitome of a perfect weekend. After struggling in qualifying, it's been a stark turnaround on

"We never give up, that's our motto," Jon Oberhofer said. "J.R. is doing a phenomenal job driving, so we're just digging deep. We're just going to try to keep kicking as much butt as we can." 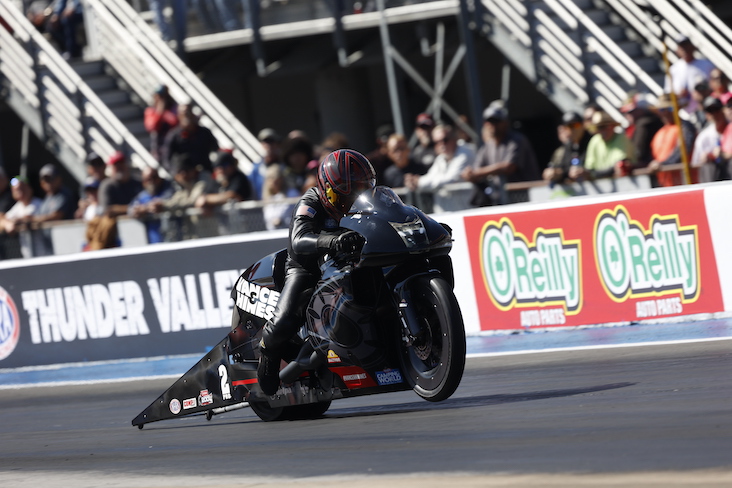 Eddie Krawiec has finally found his groove at Bristol Dragway. It took all of qualifying, but Krawiec has stepped up in eliminations in Pro Stock Motorcycle and now he's in the semifinals. He went 6.895 in the opening round and then took out No. 1 qualifier Scotty Pollacheck with a stellar pass of 6.844 at 199.29, making the fastest run in track history in the class.

Entering the weekend 101 points behind Matt Smith, Krawiec knows this weekend is a must-win situation and he's halfway there. Up next is a matchup with his teammate, Angelle Sampey, who has championship aspirations of her own as well.

"It's a battle out here and I'm finally getting my head out of my butt," Krawiec said. "I struggled to get down the track and you've got to figure out what the track wants." 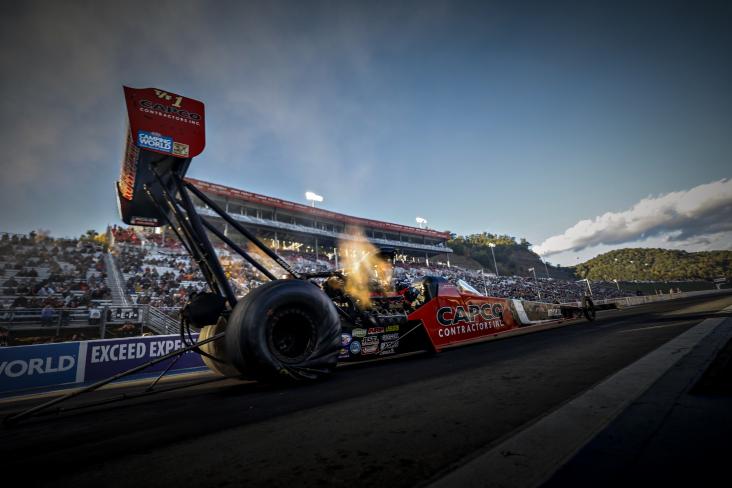 This time, the duel belonged to the Texan. In an absolute thriller, Steve Torrence edged out Justin Ashley, getting his first win over the young standout in the Countdown to the Championship. The points leader took down Ashely with a 3.677 at 331.69, doing enough to send Ashley and his 3.697 home in the semifinals.

It puts Torrence in a great spot heading into the final round, where he'll meet up with Mike Salinas after he went3.698 to beat Brittany Force.

"I've just got to do my job and stay consistent. We're just going to see what we can do," Torrence said. "This is a great, beautiful day and it's the best place there is." 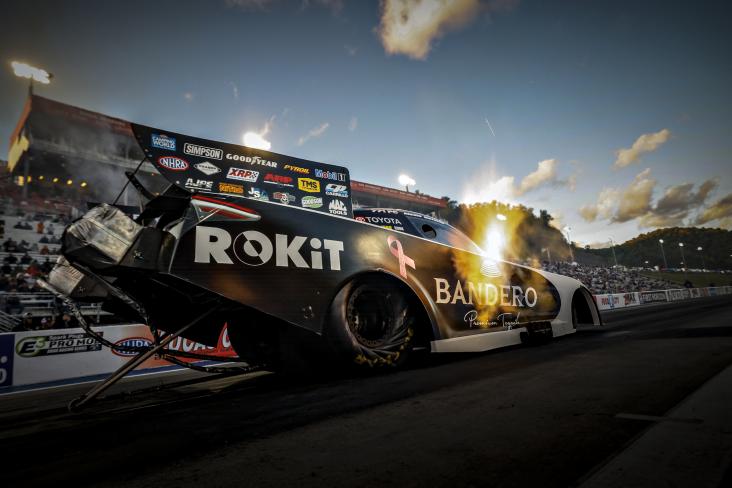 It will be an all-Toyota final round in Funny Car, as Alexis DeJoria and J.R. Todd continue to roll on Sunday in Thunder Valley. Todd has played his hand perfectly thus far, knocking off Matt Hagan, John Force and now Capps after going 3.921 in the semifinals. Capps crossed the center line, costing him five points, meaning he'll have a 1-point lead over Hagan heading to Las Vegas.

Meanwhile, Todd has played himself back into the championship conversation and will look for the victory against DeJoria, who had the quickest round of the weekend in her win against Robert Hight. She went 3.904 at 327.74 and is on the cusp of her first win of the season.

"We just want to be consistent and hopefully keep it in the groove," DeJoria said. "Having two Toyotas in the final round, it couldn't be better and it's something we've wanted for a while. Hopefully we can get a win. We feel good about it, so we'll see what happens."

It will be an all-female final round in Pro Stock Motorcycle as both Angelle Sampey and Karen Stoffer delivered jaw-dropping runs in the semifinals. Stoffer topped everyone and sent points leader Matt Smith to the trailer, laying down an incredible run of 6.785 at 196.87. It was the first run in the 6.70s of the weekend and ever at Bristol Dragway in the class, and topped Sampey's 6.814 set just minutes earlier.

She took out Eddie Krawiec and can pull to within 25 points of Smith if Sampey can knock off Stoffer in the final round.