It was a thunderous return to Bristol Dragway, capped off by the quickest run in track history, and now we’ll get to see what teams will do for an encore to close out qualifying at the NHRA Thunder Valley Nationals.
16 Oct 2021
Josh Hachat
Race coverage

It was a thunderous return to Bristol Dragway, capped off by the quickest run in track history, and now we’ll get to see what teams will do for an encore to close out qualifying at the NHRA Thunder Valley Nationals.

After more than two years away from Thunder Valley, the NHRA Camping World Drag Racing Series was back in Bristol on Friday — and for the first time ever in the Countdown to the Championship. It was a joyous return to one of the most picturesque settings in the sport, but there’s business to be done this weekend for a number of teams in championship contention.

Two rounds of qualifying are scheduled for Saturday, but the weather could provide a challenge. Rain came in the morning — and bringing cooler temperatures with it — but it is expected to pass where fans could see something special during the two scheduled qualifying sessions.

It was no surprise who was at the top in Top Fuel after the sun went down on Friday, as Brittany Force rocketed to another track record, her fifth of the season. That’s a phenomenal number, as is the 3.682 at 328.94 she put on the board. But with cooler conditions expected, that number may not be totally safe depending on how things shake out Saturday.

If the class is able to get in a couple of sessions and with temperatures moving into the low 60s and upper 50s, she could have company in the 3.60s — or Force may even be capable of topping her run from Friday. It was a strong show under the lights Friday, with eight cars running in the 3.70s or quicker, so expect more of the same on Saturday. Justin Ashley continued to impress, going 3.726 just days after winning in Dallas. He’s going to make things interesting in the championship chase, while points leader Steve Torrence’s 3.727 showed he’s ready — as usual — for everyone. 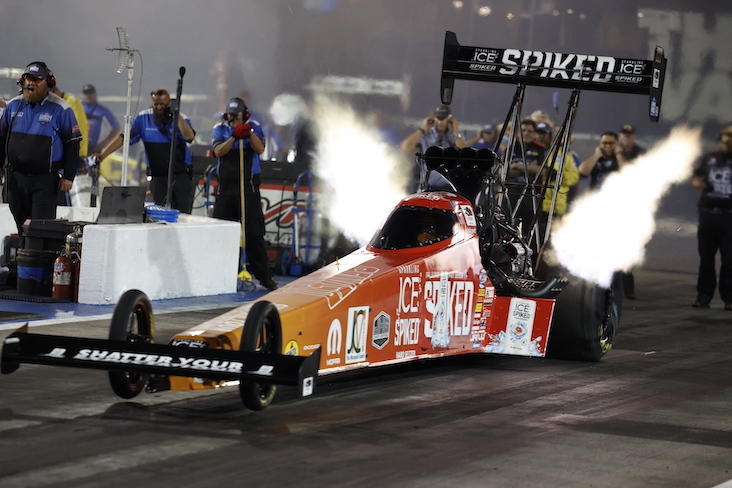 Clay Millican’s 3.747 has him fourth, while Leah Pruett showed some positives during the lone run on Friday with a 3.752. Billy Torrence, Josh Hart and Shawn Langdon all went in the 3.70s, while the likes of Doug Kalitta, Antron Brown and Mike Salinas are after big improvements on Saturday after each struggled on Friday.

Tim Wilkerson may stay atop Funny Car in Bristol and earn his first No. 1 qualifier in more than two years, but expect the numbers to look very, very different if that’s the case.

Wilkerson went 3.965 but only at 295.27 and he was among the first to point out there was plenty left in the car after it slowed on the top end. The car stuck early, but Wilkerson thinks there’s much more, believing the car is capable of dipping into the low 3.90s at more than 320 mph. 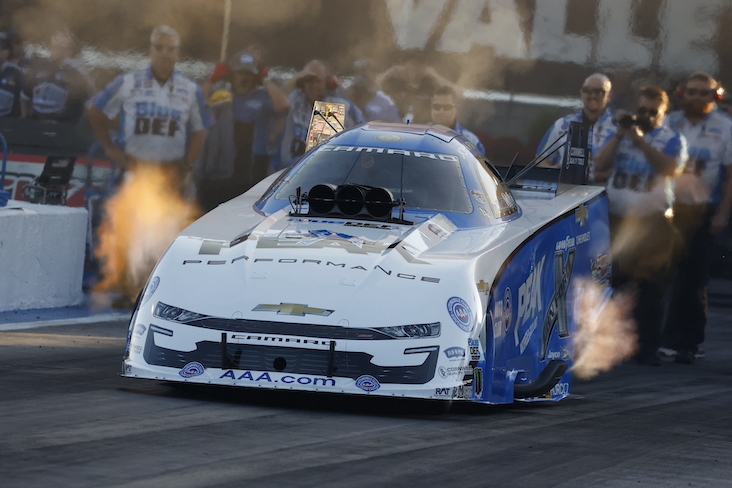 It’s likely the sentiment shared by the rest of the class, too, as Robert Hight and John Force were the only other two drivers to make 3-second runs on Friday. They had the 320-mph speeds, but will be looking to improve on Saturday as well. Meanwhile, the rest of the class has work to do on Saturday. Cruz Pedregon made what appeared to be a respectable run on Friday, but wasn’t given a time, while others simply struggled to make it down the track.

If weather becomes a factor and teams can only get in one session, the conditions might be there for something big, but it might also be tricky with temperatures dipping into the high 50s. With the likes of points leader Matt Hagan, Ron Capps, Pedregon, J.R. Todd and Bob Tasca III all still looking to make a full run, it could make for a very interesting session (or two).

It was Pro Stock Motorcycle’s first official points appearance at Bristol Dragway on Friday, which meant the first time down at track at the picturesque facility for the vast majority of competitors. While some had trouble navigating the track, it was no surprise who made the best first impression.

Matt Smith and Steve Johnson qualified first and third, respectively, as their points battle continues to heat up. Smith went 6.900 and Johnson had a run fo 6.942, with the surprise coming in the middle as Chris Bostick went 6.927. His team has come on strong in recent weeks, putting another viable competitor in a class filled with depth. Andrew Hines also made a strong move after a season of struggles, jumping into the fourth spot with a 6.957.

There were only eight riders who made 6-second runs on Friday, which should change depending on how many qualifying runs take place Saturday. Smith believed with the cooling temperatures and everyone making an initial hit that going into the 6.80s seemed plenty viable. Like Funny Car, expect plenty of movement in this class on Saturday, even if the very top doesn’t change much. Smith is determined to gobble up qualifying points this weekend, with the goal to put some separation between himself and Johnson. Of course, Johnson has other ideas.

In the E3 Spark Plugs NHRA Pro Mod Drag Racing Series presented by J&A Service, Rickie Smith, who is recognized as a Legend of Thunder Valley, is the No. 1 qualifier after going 5.834 at 248.71 and will try to maintain that spot to close the day. Points leader Jose Gonzalez, who won at the track in 2019, is fifth with a run of 5.885.