After a get-acquainted single pass Friday –- under the lights for the first time this year for the nitro cars -– the fields for the NGK NTK NHRA Four-Wide Nationals will be set today at zMAX Dragway with two final qualifying sessions.
14 May 2021
NHRA National Dragster staff
Race coverage

After a get-acquainted single pass Friday –- under the lights for the first time this year for the nitro cars -– the fields for the NGK NTK NHRA Four-Wide Nationals will be set today at zMAX Dragway with two final qualifying sessions.

Brittany Force will be gunning for a sweep of Top Fuel low qualifier positions at 2021’s four-wide events, having captured the pole last month at the event in Las Vegas. Her Dave Grubnic-tuned Flav-R-Pac dragster was the quickest car in the lone Friday session with a track-record 3.663. 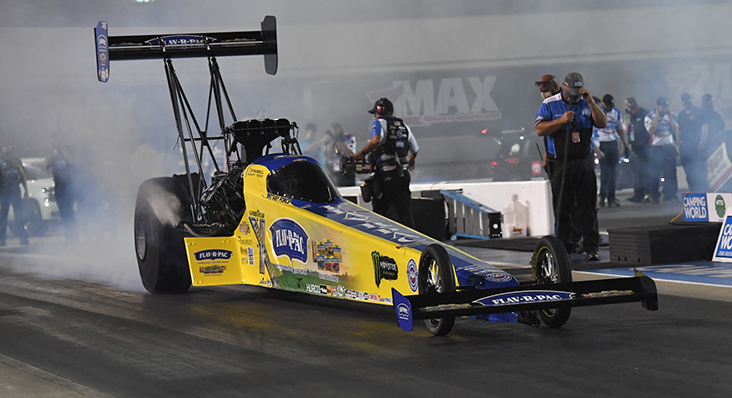 Steve Torrence (3.683) and Leah Pruett (3.718) qualified right behind her, and all three drivers made their run in Lane 4, which may be a hint of things to come. It will be interesting to see if that lane remains the favorite through today’s daytime qualifying sessions.

Eighteen drivers are trying to make the 16-car field, ensuring some bumping in the afternoon’s final qualifying session.

Most of the Funny Cars learned nothing Friday night other than how to shake or smoke the tires on the cool track. Alexis DeJoria was the standout, taking her ROKit Toyota to the No. 1 spot with the fields only three-second pass, a 3.930.

The tour regulars may have overpowered the track under prime conditions, which allowed part-timer Mike McIntire Jr. to be the surprise No 2 qualifier with a 4.013.

Just 16 Funny Cars are entered at the event, assuring that everyone will qualify, but the fight will be on for Sunday lane choice. For the record, DeJoria’s low-qualifying pass came in Lane 1.

Can anyone challenge Greg Anderson for the top spot in Pro Stock? That remains the million-dollar question after the veteran blasted to the No. 1 spot yet again in the first qualifying session on Friday, going 6.524 at 210.50. It gave him another big advantage over the rest of the class, as Aaron Stanfield was second a 6.533 at 210.67. Anderson is as locked in as he’s been in years in his HendrickCars.com Chevrolet Camaro, closing in on his 110th No. 1 qualifier.

While Anderson remained a step ahead on Friday in Charlotte, there is a number of talented drivers capable of making things difficult on him. Stanfield, Kyle Koretsky and Mason McGaha also looked good on Friday and will try to position themselves for a win on Sunday.

In Pro Stock Motorcycle, the big question is whether Joey Gladstone can hold off a slew of top standouts in the class to earn his first career No. 1 qualifier. He was able to keep a couple of 200-mph passes at bay on Friday, and while it may not be peak conditions on Saturday, the cooler weather should allow for a number of standout passes during the two qualifying sessions.

Gladstone’s 6.763 at 198.58 was a career-best pass and also set the track record at zMAX Dragway, putting him in prime position to pick not only his first career top spot, but also his first career victory. He’s been strong on his new four-valve Precision Service Equipment Suzuki and Gladstone will have to keep pushing things to ward off the likes of Matt Smith and Eddie Krawiec, who both went more than 200 mph on Friday.

It’s also worth noting a number of riders like Ryan Oehler, Scotty Pollacheck and Angelle Sampey didn’t make full runs on Friday and will be ready to make amends on Saturday.