News and Notes from the Mopar Express Lane NHRA SpringNationals

News and Notes from final eliminations at the Mopar Express Lane NHRA SpringNationals presented by Pennzoil at Houston Raceway Park. Updated throughout the remainder of the event.
24 May 2021
NHRA National Dragster staff
Race coverage

News and Notes from final eliminations at the Mopar Express Lane NHRA SpringNationals presented by Pennzoil at Houston Raceway Park. Updated throughout the remainder of the event.

There were two bye runs when Funny Car pulled to the line Monday. Bobby Bode was a no-show against Robert Hight as the second-generation racer had to get back to his college classes Monday. Jim Campbell and Jim Dunn's team left the track Sunday night because Dunn's granddaughter, Johnna, has a doctor's appointment in advance of rhino-septoplasty surgery next weekend to repair damage from a starting-line accident a couple of years ago that broke her nose. Their absence was a blessing for points leader Bob Tasca III, who shook his way to a beatable 5.26.

Cruz Pedregon’s team had a bit of work to do following Saturday’s opening round of qualifying when the two-time world champ smacked the wall just before the finish line with his Snap-on Dodge. Pedregon flattened the headers and scraped the body, but the bulk of the damage was cosmetic. He returned to qualify with a fourth-best 3.943 and won his opening-round race against Terry Haddock. 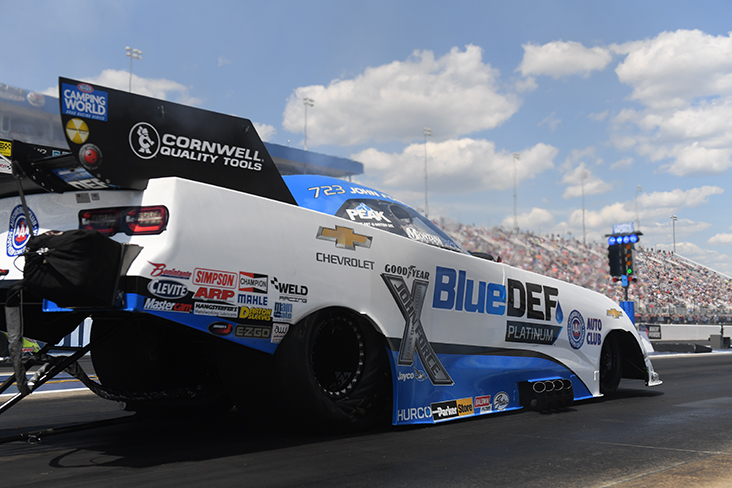 You could have won a pretty good trivia bet this year asking people what are the original NHRA permanent numbers of John Force, Robert Hight, and Brittany Force as none of them had run these numbers in years, inheriting instead their Top-10-finish numbers. After sitting out the final nine events of the 2020 season, all three finished outside of the top 10.

Anthony Troyer had the first chance to claim the $1,000 Constant Aviation Factory Stock Showdown bounty but was unable to beat Gatornationals champ Aaron Stanfield in round one. Stanfield ran a stout 7.89, one of four such e.t.s recorded in the opening round. Stanfield, the reigning season champ, has won the last seven events in the class dating back to last year's U.S. Nationals.

After damaging their special Pennzoil-liveried body in a round-one blower explosion, Matt Hagan came to the line in round two with the DSR team's old red Hellcat Charger paint with which they won the 2020 championship.

The latest battle between Shawn Langdon and Justin Ashley, generally regarded as two of Top Fuel’s best starting line drivers, went to Langdon’s DHL dragster and it was won on the starting line. Langdon backed up his .048 light in the first round with another very respectable .046, and he gained a three-hundredths edge on Ashley’s tardy (for him) .079. At the finish line, the scoreboards read 3.797 to 3.781 in favor of the DHL team.

With no opponent in the other lane, Steve Torrence’s Capco crew wasn’t afraid to go for the throat with their quarterfinal bye run and the end result was an impressive 3.711. Torrence will have lane choice against Clay Millican in the semifinals while Shawn Langdon will take on Doug Kalitta, who advanced after Antron Brown smoked the tires.

The final round will feature another chapter in what is currently the best rivalry in Top Fuel when Doug Kalitta takes on Steve Torrence. For Kalitta, it’s his 107th career final, all of them in Top Fuel while Torrence will be racing in his 72nd final, counting his successful years in the Top Alcohol Dragster class. Torrence will have lane choice following his blistering 3.70 in his win against Millican

Tim Wilkerson’s Levi, Ray & Shoup Mustang has been rock solid in qualifying this year and he finally has the race day results to show for it. Wilkerson scored round win against Blake Alexander and Alexis DeJoria to earn his second semifinal finish of the year, counting the Las Vegas four wide race.

A consistent Ron Capps is headed for the final round for the 127th time in his career following a solid win against Wilkerson in the semifinals. Capps was credited with a semifinal in Las Vegas, but hasn’t raced in a final round since the season finale in Las Vegas last year, where he lost to teammate Matt Hagan. Robert Hight is also headed for his second final of the year following a solid win against incoming points leader Bob Tasca III. Hight, a runner-up to start the season in Gainesville, is looking for his first win since the 2019 fall Charlotte event.

Aaron Stanfield’s shot at another double ended when the defending Houston winner lost to Matt Hartford and his almost perfect .008 reaction time. Hartford, who won his first Pro Stock event in Houston in 2018, is slated to race Deric Kamer’s GetBioFuel Camaro. Kramer used a slight holeshot over Kyle Koretsky to reach his 18th career final.

TOP FUEL, ROUND ONE

Following an abbreviated one-shot day of qualifying on Saturday, it didn’t take long for Top Fuel to get serious as the first pair of eliminations featured a rematch of the Gatornationals final between rookie Josh Hart and world champion Shawn Langdon. The match ended early when Hart smoked the tires and backfired a supercharger right off the starting line, sending Langdon on to the win with a 3.803.

With the help of crew chief Aaron Brooks, Artie Allen made the best run of his short career with a 3.870, but it wasn’t nearly enough to beat Clay Millican’s strong 3.754. Millican came into the Houston event clinging to the No. 10 spot in the Camping World Top Fuel standings so a round win was a welcome sight.

Billy Torrence didn’t get down the track during Saturday’s first session but that didn’t seem to matter as he set low E.T. of the event with a 3.694 in his win against Mike Salinas. Torrence was joined in the quarterfinals by his son, Steve, who may have caught a break against Mitch King. Torrence’s Capco dragster spun the tires at half-track, slowing to a 4.044, but at that point, he was already well ahead of King.

Antron Brown’s Matco Tools dragster went silent well before the finish line and coasted to a 4.142, but it was more than enough to take the win against Lee Callaway, who smoked the tires just off the starting line. Leah Pruett’s Pennzoil dragster also lit the tires at the hit of the throttle, sending Justin Ashley on to a round win with a competitive 3.770 from his Smart Sanitizer dragster.

The final match between Brittany Force and Doug Kalitta should have been one of the most highly anticipated matches of the round, but it was delayed by rain. NHRA officials ultimately made the decision to postpone the rest of the event until Monday morning at 10 a.m. 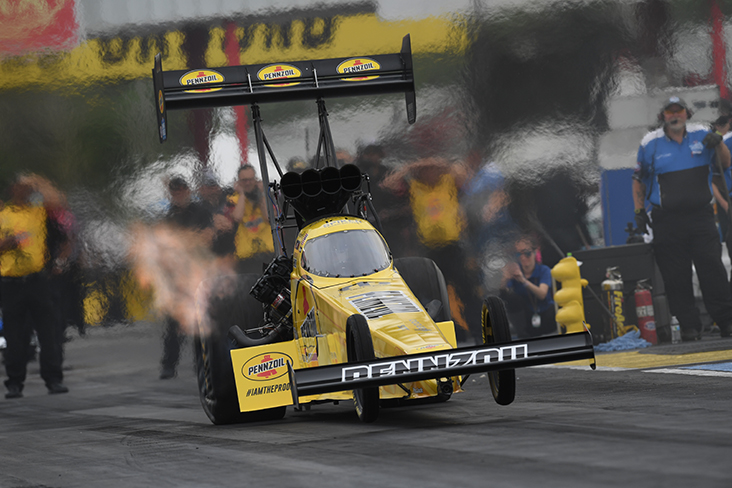 For a span of 19 events that began just after the 2019 U.S. Nationals and ran through all 11 events in the COVD-shortened 2020 season and then the first three events of 2021, Leah Pruett didn’t lose in the first round, but her loss Sunday marked the third straight event in which she didn’t make it out of the opening stanza.

This time it was the literal 10-cent piece as, after an impressive .020 light, the car lost traction.

“We had a line and fitting that no longer wanted to be married to each other and they disconnected themselves, draining our CO2 bottle after the burnout,” she said. “So, unfortunately, we did not have the proper pressure to set the clutch where it needed to be and when I hit the gas to leave, we had extra arms in play in the clutch that applied way more power than we had wanted.”

There were actually 15 Top Fuel dragsters on the grounds at Houston Raceway Park, but Scott Palmer did not make a qualifying attempt, so he’s not listed on the qualifying sheet, reducing the field to 14 entries. Palmer spent the first session helping Lee Callaway, and had reportedly planned to run in Q2, but never got that opportunity due to the heavy rains that hit the Houston area yesterday.

Mitch King hadn’t run an NHRA event since the Houston race in 2008, but he returned to the Top Fuel class this weekend and qualified on the bump, setting up a round one match against world champion Steve Torrence. For those wondering if he’s got a chance to upset the three-time champion a little history lesson is in order. King made his professional debut in Houston in 2002 and qualified No. 13. He went on to beat Larry Dixon in round one before bowing out against Tony Schumacher in the quarterfinals.

Greg Anderson isn’t afraid to admit there was a time when he wondered if he’d ever be able to tie or surpass Warren Johnson’s record of 97 Pro Stock wins but that appears to be a foregone conclusion after Anderson kicked off the 2021 season with wins in Gainesville and Atlanta. “It crossed my mind,” Anderson said. “I mean, I’m not getting any younger and it’s not getting any easier out here. I do feel like we’ve got a great car right now and we just need to take advantage of that.”