There’s a lot that’s different about Greg Anderson’s 2021 season than what he had been accustomed to over the bulk of his standout Pro Stock career, but you can't argue with the success he's had already this season.
12 May 2021
Josh Hachat
Feature

There’s a lot that’s different about Greg Anderson’s 2021 season than what he had been accustomed to over the bulk of his standout Pro Stock career.

For one, Jason Line isn’t racing beside him each weekend, a stark contrast from previous seasons when the KB Racing teammates wreaked havoc on the class.

Secondly, when Line isn’t at the track, which was the case in Atlanta, it’s made Anderson’s life at the track a lot more hectic.

"The biggest difference is I’m a whole lot busier than I used to be,” Anderson said. “Jason managed the tuning load, so when he’s not there, I’m a whole lot busier. The preparation at the shop has been better because he doesn’t have to worry about jumping in a race car, but at the track, it’s been a little different. There wasn’t one minute of each day to look up in Atlanta, but maybe that’s better. Maybe I’m better operating under pressure.”

Despite those major changes to Anderson’s racing life in 2021, it’s been an impressively dominant start to the year, capped off by a spectacular performance in Atlanta.

With Line still working at the KB Racing shop, Anderson’s car has been a clear step ahead of the competition to open the year, as he has qualified No. 1 in the first three races. 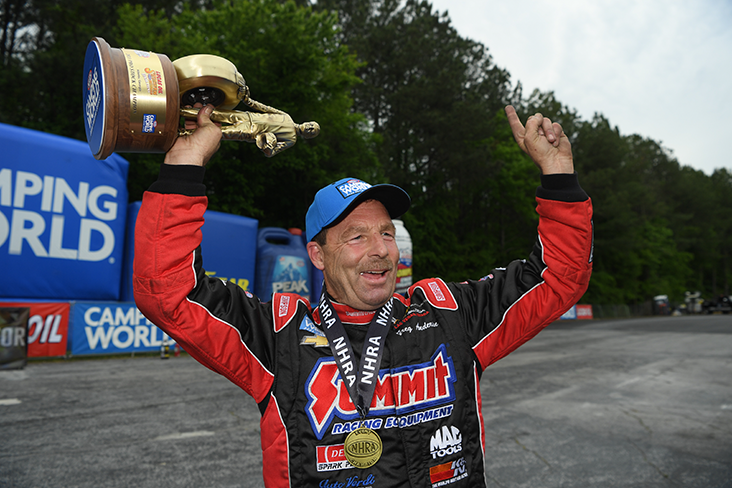 He’s won two of those, putting him one away from tying Warren Johnson for the most in Pro Stock history. He was in control from start to finish to close out Atlanta Dragway, calling the four runs he made on race day some of the smoothest he’s ever had in competition.

“I’ve had a fast car, and that really stands out, and that goes back to the last half of last year,” said Anderson, who has 96 career victories. “They had my car running well, and I wasn’t able to close the deal on Sundays. So, we had a fast car and five months off to work on things, and we worked on a lot of stuff. The car got better, and I’ve had a really good car the first three races.

“I’ve had a car that can win every race this year, and as a driver, that’s absolutely all you can ever ask for. It’s just a matter of continuing to make the right calls and me doing the job as a driver.”

Anderson added it’s on him to hold up his end of the bargain, noting he’s been a “B driver” so far this year. He has hopes to be an “A driver” starting this weekend in Charlotte for the NGK NTK NHRA Four-Wide Nationals at zMAX Dragway.

It’s a race he’s won in 2011 and 2012 and finished as the runner-up on two separate occasions as well, and he’s determined to keep his hot string going.

He’ll debut a new HendrickCars.com scheme for the race, which pays homage to Ricky Hendrick. It’s a look NASCAR driver Kyle Larson has campaigned as well, and Anderson and Hendrick Motorsports team Rick Hendrick have been longtime friends. It adds a little extra incentive for the weekend, giving Anderson one more reason to keep rolling.

“It’s a neat deal, and I’m looking forward to it,” Anderson said. “To get him and his gang out there, I really, really want to do well for them. I look forward to the four-wide race. I like it and the fans love it, and you can’t argue with that.”