It’s race day in Epping; Who to watch, how to watch, and what you’ll see at the TascaParts.com NHRA New England Nationals presented by Bandero Premium Tequila
13 Jun 2021
David Kennedy
Race coverage

William Bradford, of the Mayflower, speaking in 1620 said that “All great and honorable actions are accompanied with great difficulty, and both must be enterprised and overcome with answerable courage.”

The road to an NHRA Championship is built from many paths, and the journey is accompanied by many travelers. The courage to persevere, to build or rebuild again and again as necessary is what separates a champion from the competition.

As the NHRA Camping World Drag Racing Series rolled into Epping, New Hampshire’s, New England Dragway, NHRA drag racers, and fans would do well to remember the spirit of relaunching that the pilgrims from this part of the nation set in motion. Their lessons, though hundreds of years old, still move us ahead like a nitro-burning Hemi.

Following Friday and Saturday’s three qualifying sessions, the Top Fuel and Funny Car fields are set with a modified field of killer competitors. Pro Stock’s ladder is conventional—but filled with just as many reaction-time and e.t. assassins.

With a great crowd in attendance, great weather assured, and great coverage on FOX’s crown jewel television network to share the excitement, today’s racing will be one for the ages—and filled with the courage that would make those on the Mayflower quite proud. 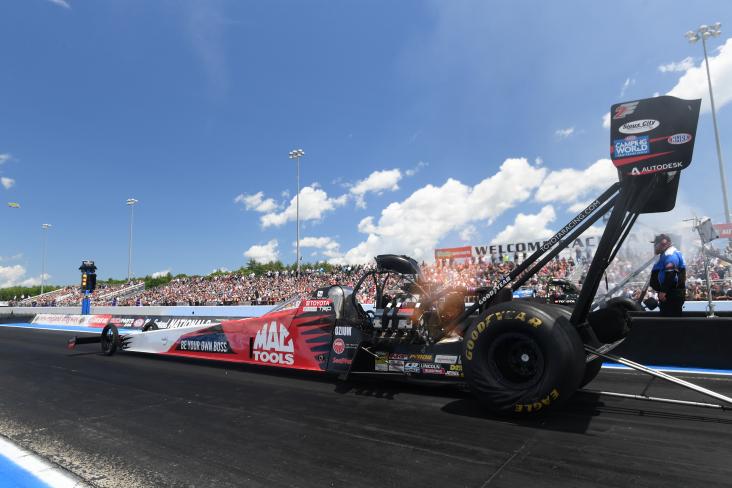 TOP FUEL: The Torrence family came into Epping as the Top Fuel team to beat. With momentum, past success, and the Lagana Brothers who literally grew up running at New England. Billy Torrence was the man to master the power-to-traction opportunity and stormed through the Friday-night session like a Nor'easter. After three rounds nobody could touch his 3.744. Mike Salinas was close. He improved on his Friday run with a 3.771 on Saturday to put him right behind elder Torrence. J

Justin Ashley was one of the few drivers smiling after Friday, and though his car seemed to exhibit a stuck throttle in Saturday’s final session, he made a clean run and held on to a No. 3 position. Steve Torrence made a very rare throwaway run Friday night, but the three-time champion improved on Saturday with a 3.778 run to put him in the fourth position. 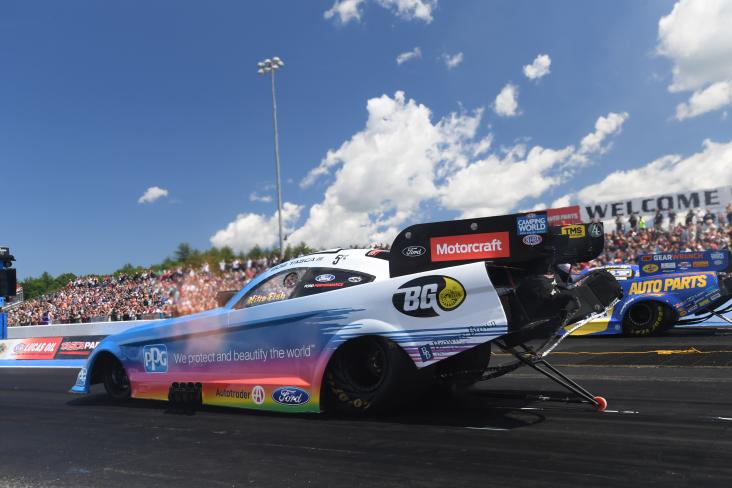 FUNNY CAR: Knowing there was little chance the other Funny Car teams could touch his Friday night times, Matt Hagan held on to his No. 1 slot and gathered data while making two clean runs on Saturday. He gave the crowd in attendance a great final pairing as he matched up again John Force and ran a 3.994 to Force’s session-quicker 3.979. Good enough to move the Blue DEF Camaro of Force to third and keep Hagan’s Hellcat in the number one spot.

The big move of the day came from the NAPA Auto Parts team when Ron Capps upped his game with a 3.927 at 324.59 mph run that catapulted him into the number two spot. Speaking of auto parts, New England title-rights sponsor TascaParts.com Bob Tasca III managed to move to the No. 5 slot. But perhaps even more significant than his 3.962-second timeslip was the call his father, Bob Tasca II, made by saying, “When we win this one, we’re gonna give Alan [Reinhart] a special discount on a Ford of his choice. Actually, we’ll take care of all of you!” he said as he looked to the fans in the stands. Talk about “Win on Sunday. Sell on Monday!”

Crew chief Del Worsham said he, “missed it [Friday] night with the tune,” but managed to put Alexis DeJoria in the number 2 spot for a brief time with the whole DeJoria and Bandero Premium Tequila cheering her on. Cruz Pedregon shutoff just past the 300-foot mark in Q2 to record a 4.81 — making his official run good for the No. 4 spot. In Q3 he came back to run a stronger 3.969 and said, “We hit the wall in Houston and we hit the wall here — something was not right. We’ve determined there wasn’t enough clearance between my helmet and the cage, and I was probably the only Nitro driver out here not wearing a chinstrap. Well, now I’m wearing a chinstrap.” 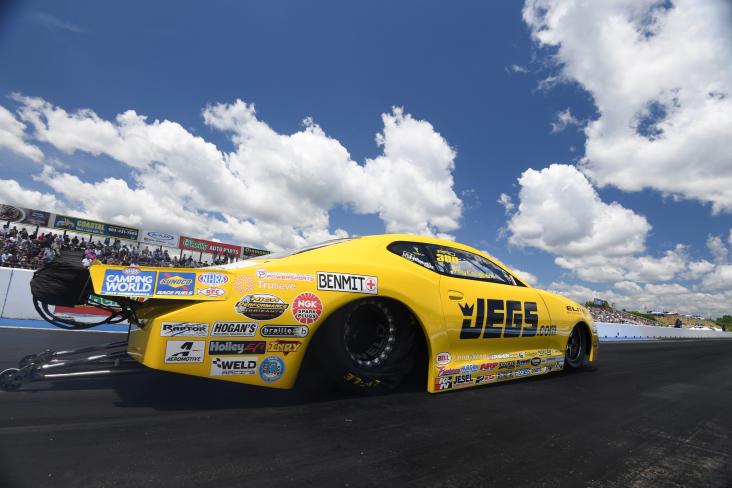 PRO STOCK: After the Friday session, nobody would have faulted you for thinking Epping’s number one spot in Pro Stock was going to a next-generation racer. Yet considering the No. 1 qualifier in four of the last five Pro Stock events was old-guard himself, Greg Anderson, you’d have to think he might have it in him to disrupt the trend — and boy, did he— running 6.526 in Q2 and laying down a time nobody could touch.

Now Anderson can claim the No. 1 qualifier spot in five of the six 2021 Pro Stock races. And the one he missed? That's the race he qualified No. 2 to the car of Dallas Glenn — a car Anderson just happened to be tuning.

Mason McGaha’s 6.538, Aaron Stanfield’s 6.545, and Matt Hartford’s 6.551 Friday night runs survived both Saturday qualifying sessions and kept them in the second, third, and fifth place slots. While Erica Enders 6.545 on Saturday showed improvement over her Friday night run, and reminded competitors of what she’s capable of at this track. Deric Kramer's intense concentration also allowed him to cut more than half a second off his Friday night slip and record a 6.551 at 210.37 to round out the top six.

SEE THE ACTION: You can catch the NHRA on FOX qualifying on FS1, and the final eliminations on FOX Broadcasting Network. Superfans can see every minute of the action on NHRA.tv.