The annual Manufacturers Meet at Orange County Int'l Raceway in Southern California was a big deal back in the late 1960s and early 1970s, drawing the best of the best. But how many can you identify? We've got the answers!
26 Nov 2021
Phil Burgess, NHRA National Dragster Editor
DRAGSTER Insider

Last week’s “lost photos” column inspired a ton of response from fans who remembered many of the subjects of the photos, but none drew more interest than the group photo of Funny Cars on the Orange County Int’l raceway track prior to the annual Manufacturers Meet.

A lot of fans remembered those days when they rooted for cars that looked much more like the street-car versions than they do today as the team championships that were hotly contested (as were the annual East-West battles that also were popular at SoCal tracks).

James Ibusuki, one of drag racing’s premier illustrators well known for his exacting details and intensely researched artworks, was among those weighing in. Besides his artistic skills, Ibusuki also is a true lover of our sport’s history and a treasure trove of information.

Ibusuki wrote to tell me that the photo was not from the 1969 race — known officially as the OCIR Manufacturers Funny Car Team Championships — but from 1968, and he was able to identify the vast majority of the cars. I  blew up the photo to help illustrate his findings.

Take it away, James …

“The actual date was Saturday, Nov. 23, but halfway through round one of the 15 scheduled races, a tremendous fog rolled in to halt the action. Roger Lindamood's 'Color Me Gone' and Jess Tyree had completed their burnouts but were signaled to shut 'em down.

“While I can't name every car in this photo, I can add several more to your list. Let's take a peek at the near side. Behind Ray Alley is the Doug's Headers Corvair, campaigned by Bourgeois & Wade [the follow up to Doug's '67 Indy winner]. Behind the Corvair is the Coleman Super Ford Torino, driven by Sid Foster. I can't make out the next Funny Car, but it feels like a Camaro or Firebird.

“On to the far lane from nearest to furthest down track, up first is Don Schumacher's 'Stardust' 'Cuda, then I believe it's the Kenz & Leslie 777 Cougar. Next is Lew Arrington's 'Brutus' Firebird, followed by the Tyree Headers' bird. Then comes Larson's USA-1, Kelly Chadwick's altered wheelbase [yes, even in late '68!] Camaro and the Hemi-Cuda II.

“Next was a rather unique circumstance, in terms of a single racer presenting two completely different looks at the same race. Huh? Listen to this: Lindamood must've destroyed his '68 Charger body before the Manufacturers. Meet. He showed up with a black primered Charger and horrible temporary lettering. 'Color Me Gone' was in neon orange and yellow, with several flower-power stickers plastered everywhere. It was pretty awful looking for a top-billed racer known for his fantastic paint jobs.

“The Manufacturers Meet was postponed until the following Saturday, but that night a constant drizzle further delayed the race until the next day, Dec. 1. When the actual racing began, Lindamood and Tyree picked up right where they left off, and the Funny Car marathon was finally on its way! But we were happily stunned to see Lindamood’s Charger wearing a fantastic paint job — candy sky blue on the sides, plus brilliant magenta, orange, and dark blues on the tops. It wasn't lettered, but we didn't care; the Charger was dazzling! Like most of Lindamood's Funny Cars, it was painted by Dennis Ricklefs of Bellflower, Calif.

“OK, back to the lineup photo. After the primered 'Color Me Gone' is Eddie Schartman's 'Air-Lift Rattler' Cougar, then Jack Chrisman's Kendall GT-1 Comet [Mercury's last Comet holdout]. The next Funny Car is very hard to ID, but it feels like a Camaro or Firebird. I'm going to guess it's Gene Conway's 'Hemi-Bird' Firebird. Its black vinyl roof could be a match to the dull dark one depicted here. After the questionable car is the magnificent multi-green 'Super Chief' Charger. Next is the 'Kansas Badman' Torino. It was a near twin to the more famous Coleman version, both in bright orange with black accent stripes. The next car is Tommy Grove's 'The Going Thing' Mach 1, one of the first Funny Cars to run 200 mph in '68. I can't make out the last car — some kind of fastback body. Because of its silvery tone and similar shape to Grove's Mach 1, I'm going to guess that it's Larry Fullerton's 'Trojan Horse' Mustang, sponsored by Ring-Free Motor Oil.

[By the way, I guess OCIR manager Mike Jones wasn't too strict regarding which cars got to participate in the lineup ceremony. That is, they didn't have to be official team cars. For instance, Ray Alley was only an alternate. Ditto for the Trojan Horse.]

“Unfortunately, the Mercury team could not return after the two postponements. Popular Hot Rodding reported that Schartman and Leslie had previous commitments, Gates was nursing some burns from a freak pit accident, while Chrisman and Keaton elected to race at Lions instead. Another team change included Bovan's 'Blair's Speed Shop' Camaro replacing the 'Assassination' Corvair. Driver Art Ward pulled a giant wheelie and smacked the oil pan during a check-out pass, which opened the door for Bovan. [The '67-'68 Manufacturers Meets were invitational events. From '69 and beyond the Funny Cars had to qualify to earn a spot on each team.]

“The '68 Manufacturers Meet has always been my favorite trip to the drags, which is why I have so much obscure info on the race.” 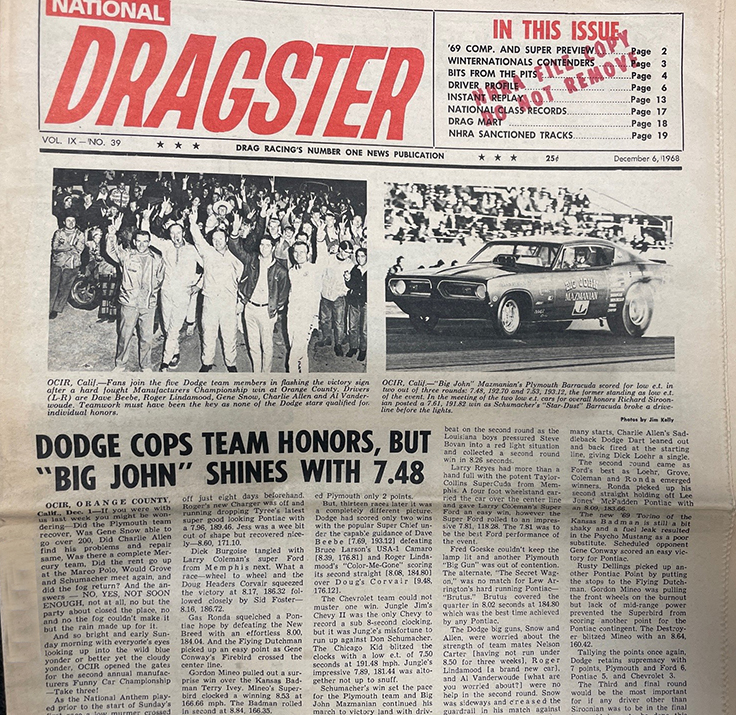 Even though the Dragster photo archives are still yet to be unboxed and refiled, I do have access to the library of actual issues to provide some details of the racing action, and the photos that Jim Kelly submitted, which will not look great here, but, hey … better than nothing.

If you were with us last week, you might be wondering: Did the Plymouth team recover? Was Gene Snow able to go over 200? Did Charlie Allen find his problems and repair same? Was there a complete Mercury team? Did the rent go up at the Marco Polo? Would Grove and Schumacher meet again? And did the fog return? And the answers NO, YES, NOT SOON ENOUGH, not at all, no, but the party about closed the place, no, and no, the fog couldn't make it, but the rain made up for it.

And so bright and early Sunday morning with everyone's eyes looking up into the wild blue yonder or better yet the cloudy yonder, OCIR opened the gates for the second annual Manufacturers Funny Car Championship — take three!

(For those who don’t know, the Marco Polo reference is to the local motel where the race teams always stayed while racing at the ‘County. With eight days off between attempts, it’s certain that the partying was legendary.) 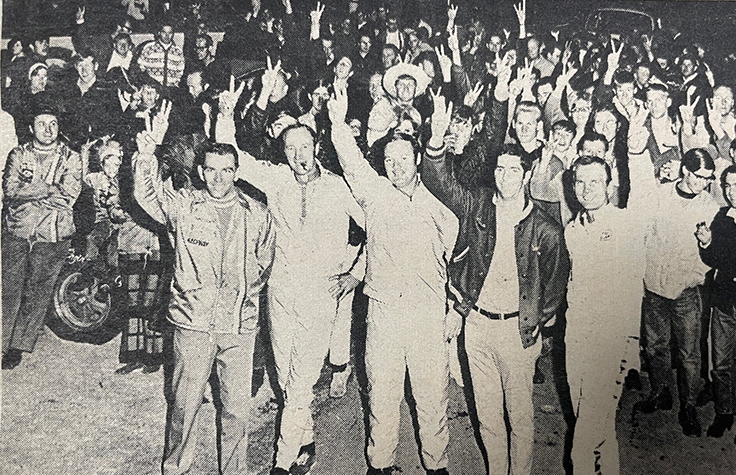 Dodge led the points heading into the third and final round with 7 points, followed by Plymouth and Ford (6 each), Pontiac (5), and Chevrolet (3) and piled on more wins to clinch the crown.

Gene Snow’s Rambunctious Charger was especially impressive, cranking out a 7.56 at 204.08 in his direct-drive Charger to help seal the win, but it was the tw Plymouths — the best of the west and the best of the east — settling the individual honors.

I did find in our files some photos from the 1969 Manufacturers Meet at OCIR, which I display below. 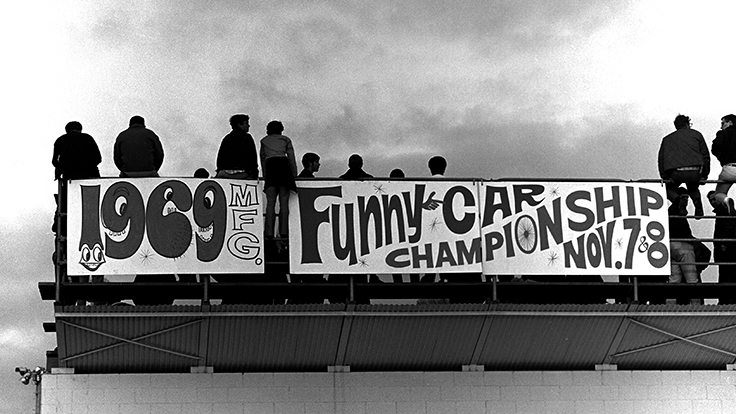 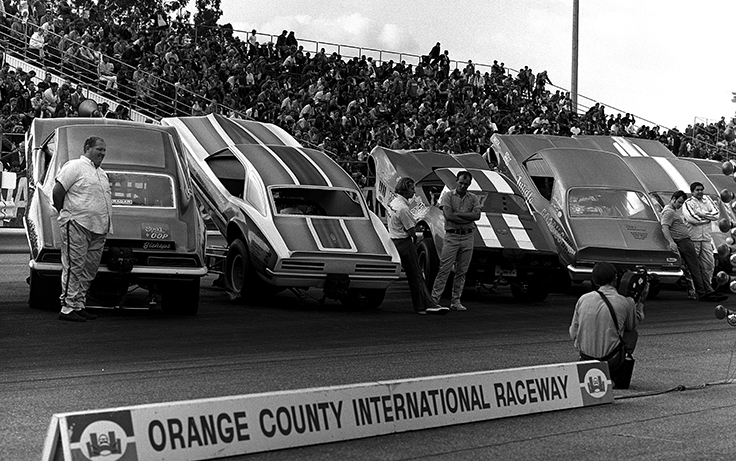 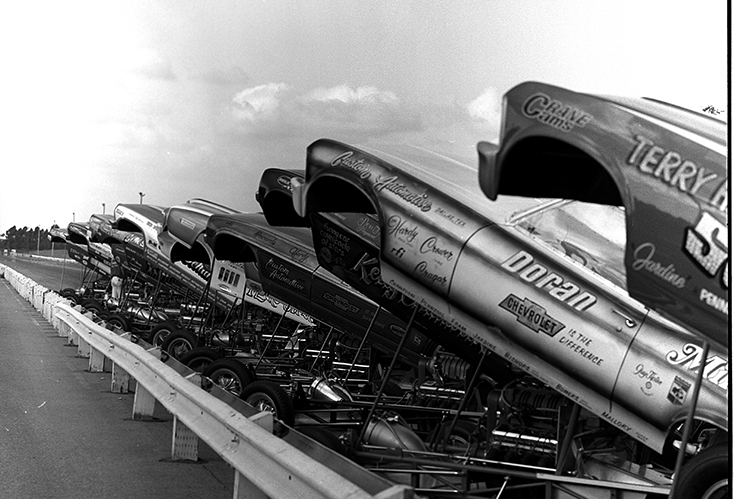 A cool look down the line of cars from guardrail height.

And another ground-level shot; although the file name on this photo says 1972, I'm pretty sure it's from 1969. 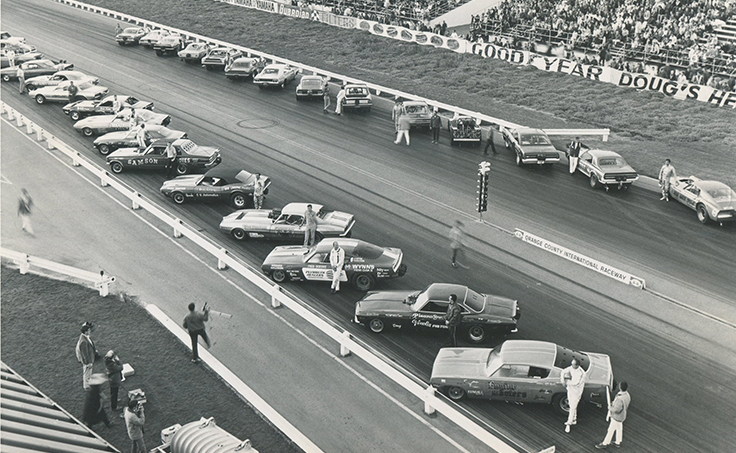 This one also looks late-1960s, but it's not the '68 race; look at the signage on the far side (from Yahama/Weber to Goodyear and Doug's).

Oh man, were those the glory days of Funny Car, or what?

Thanks for taking another trip back in time with me, and thanks to James for his great insight on the field.