After two tremendous days of qualifying at Maple Grove Raceway, the journey towards a championship officially begins with today’s eliminations at the 36th annual Mopar Express Lane NHRA Nationals presented by Pennzoil.

With speed records obliterated and a great deal of shuffling over three qualifying sessions, drivers will now look to start the Countdown to the Championship with a victory. Sunday’s results certainly won’t decide the world champion, but there’s also something to be said for starting strong in a seven-race (or six if you’re in Pro Stock or Pro Stock Motorcycle) sprint to the title. 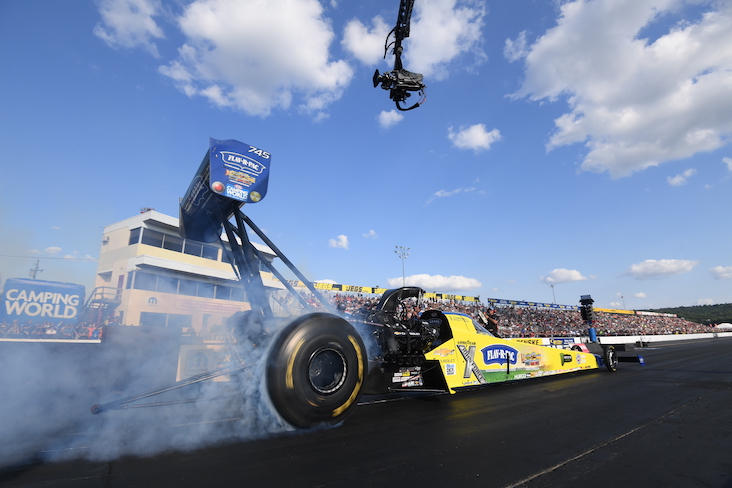 Brittany Force knows plenty about sprinting to the finish line in Top Fuel this weekend, setting a track speed record (335.57 mph), qualifying No. 1 for the seventh straight race with a run of 3.660-seconds and making the quickest pass in every qualifying session. What does that mean for Sunday? Well, considering she ran well in every type of condition thus far, earning nine bonus points, she could be in for a long Sunday, which starts with a first-round bye.

Points leader Steve Torrence, the three-time defending world champion, will have a bye to the semifinals if he wins his opening round matchup with Joe Morrison, as he looks for an incredible ninth win this season. Teammates Antron Brown and Leah Pruett will meet in the opening round, which doesn’t bode well for someone, with the winner meeting Force.

Two other championship contenders — Mike Salinas and Shawn Langdon — also face off in the first round with Salinas putting together a number of solid runs this weekend to qualify fourth. Justin Ashley and Doug Kalitta will also meet up to open eliminations.

In Funny Car, six different drivers earned bonus qualifying points this weekend, more than any other class and par for the course for this talent-filled category. Cruz Pedregon lowered the boom to finish off the day, going 3.875 to earn his first No. 1 qualifier since 2016. That gives him a first-round bye, though that’s where the easy runs end. He’ll meet either J.R. Todd or Alexis DeJoria in the second round. 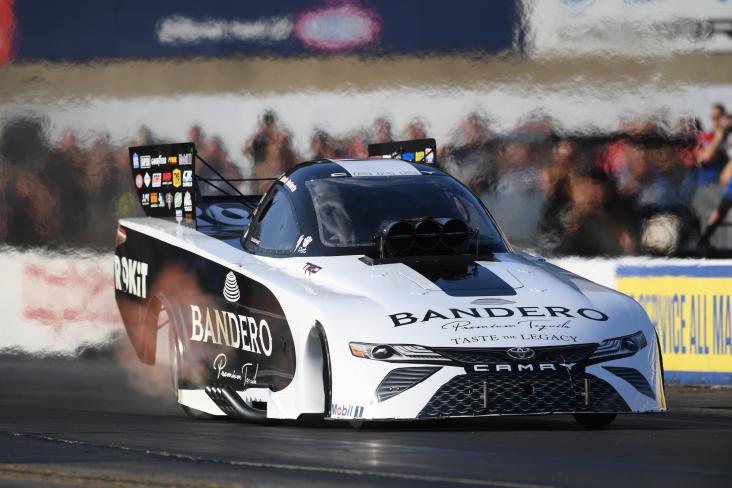 Robert Hight can get a bye run to the semifinals if he can oust Cory Lee, while other marquee matchups include Tim Wilkerson, who qualified third after winning Indy last weekend, and John Force, who hasn’t made a strong run all weekend, and points leader Ron Capps going up against Blake Alexander. Bob Tasca III takes on Paul Lee as he looks to get back into the points lead and ensure a different leader for the sixth straight race.

Defending Pro Stock world champ Erica Enders had the quickest run this weekend, vaulting to the top with run of 6.524 on Saturday, but Greg Anderson might have been the most consistent, earning seven bonus points in qualifying and making the quickest run of the final session Of course, an Enders vs. Anderson duel is one many have predicted for these playoffs, with each going for their fifth world championship. 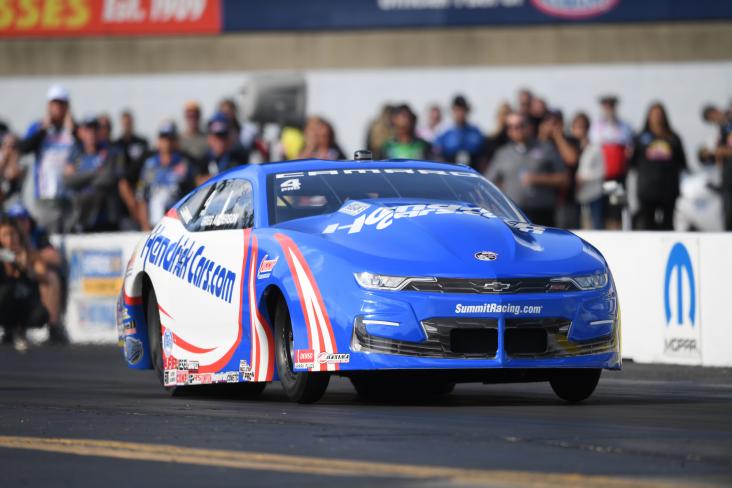 Enders is trying for her third straight world title after earning her first No. 1 qualifier since 2019, but there’s no easy roads to a win in Pro Stock. Chris McGaha or Deric Kramer could meet her in the second round if she can beat Larry Morgan, while Matt Hartford faces off with Mason McGaha on the other side of the bracket. Anderson will try to come out of that side, with a possible matchup looming with Enders in the final round.

Pro Stock Motorcycle’s Angelle Sampey showed that Maple Grove Raceway brings out the best in her. It brought Sampey her first career victory in the class 25 years ago and she’ll look to get another this weekend to pick up her first win of the season at an opportune time. She races Jianna Salinas in the first round of eliminations, with a possible matchup in the next round coming against either Joey Gladstone or Karen Stoffer.

Matt Smith vaulted to second with a 6.750 to close out qualifying, moving him into a possible matchup with Eddie Krawiec in the semifinals. Krawiec, of course, won Indy last weekend and qualified third in Reading with a 6.763. Angie Smith will race Andrew Hines in an enticing first-round matchup, with the winner possibly getting Krawiec a round later.