The kickoff to the Countdown to the Championship featured two track speed records during Friday’s lone session, and with another spectacular day in store, all the stars in Top Fuel, Funny Car, Pro Stock and Pro Stock Motorcycle will look make moves during Saturday’s final two sessions.
11 Sep 2021
Josh Hachat
Race coverage

For anyone who forgot just how special — and fast — Maple Grove Raceway can be, they were reminded in emphatic fashion during the first round of qualifying on Friday as part of this weekend’s 36th annual Mopar Express Lane NHRA Nationals presented by Pennzoil.

The kickoff to the Countdown to the Championship featured two track speed records during Friday’s lone session, a noteworthy achievement for a track as notoriously fast as Maple Grove Raceway. With another spectacular day in store weather-wise, all the stars in Top Fuel, Funny Car, Pro Stock and Pro Stock Motorcycle will look make moves during Saturday’s final two sessions in front of what should be a huge crowd on hand.

Whether it’s moving up the ladder or getting positioned for championship Sunday, the final two qualifying sessions should be terrific. Top Fuel’s Brittany Force was just that on Friday, eclipsing the track speed record with her run of 335.57 mph, and her run of 3.666-seconds sent her to the top. Of course, that’s no surprise for a driver looking to qualify No. 1 for a seventh straight race.

That seems likely and while it’s a splendid achievement, it’s about wins and losses this time of year. Force scooped up qualifying points on Friday, but four other drivers — points leader Steve Torrence, Clay Millican, Mike Salinas and Billy Torrence — all ran in the 3.60s on Friday, which means things are incredibly competitive.

Three more — Justin Ashley, Leah Pruett and Josh Hart — all went in the 3.70s, while the likes of Doug Kalitta, Antron Brown and Shawn Langdon will look for something better on Saturday. 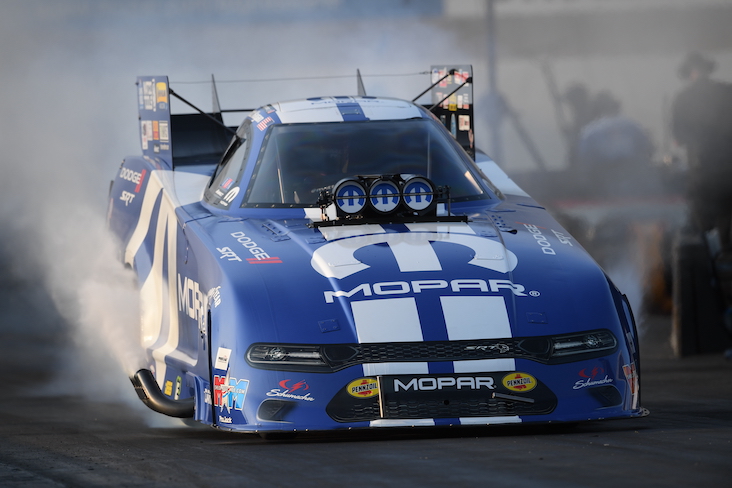 Funny Car — to the surprise of nobody — was tightly compacted, which has been the theme all year. Robert Hight’s 3.883 gave him the top run and that could hold on Saturday. Of course, plenty could also change considering the top eight spots were separated by just .073, and that’s a list that doesn’t even include Blake Alexander or John Force, who was one of just a small handful who didn’t make a full run.

Tommy Johnson Jr., filling in for the recovering Matt Hagan, Bob Tasca III, Cruz Pedregon, points leader Ron Capps, Indy winner Tim Wilkerson, Alexis DeJoria and J.R. Todd all ran 3.956 or quicker, which of course means nothing is going to come easy for anyone this weekend.

Even though there are no wins to show for it, you could argue Kyle Koretsky has the top-performing car over the last three races. He’s been to two straight finals and made the best run on Friday at his home track with a 6.547 at 209.98.

The only thing missing is a win, but that team has come together at the perfect time in a class loaded with championship talent. He seems fully recovered from that Indy heartbreaker in the final round to Erica Enders and could be poised for a big weekend at Maple Grove Raceway.

Of course, there’s not much separation at the top in Pro Stock. The top six drivers — a list that included Koretsky, points leader Greg Anderson, Aaron Stanfield, Dallas Glenn, Troy Coughlin Jr. and Enders — all ran between 6.547 and 6.553 and four more — Matt Hartford, Chris and Mason McGaha, and Vincent Nobile — weren’t worse than a 6.579. With that in mind, there could be plenty of shuffling on Saturday. 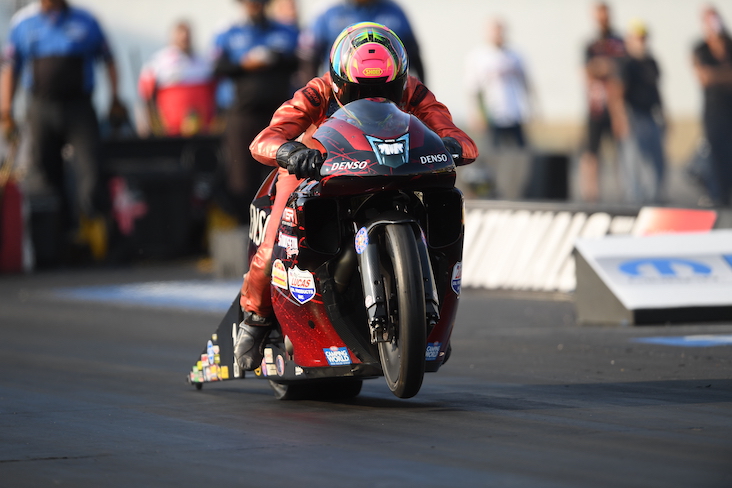 The Vance & Hines team has clearly activated playoff mode, with Eddie Krawiec winning in Indy and Angelle Sampey, who was the runner-up there, qualifying No. 1 with a 6.761 at Maple Grove Raceway, the site of her first career win 25 years ago.

She also qualified No. 1 at that race, so Sampey is hoping history repeats itself. Krawiec made his own history by making the first 200-mph run at the track in class history and setting the track speed record after going 6.763 at 201.67.

After his Indy hiccup and first-round loss, points leader Matt Smith recovered nicely with a 6.766 at 201.34. More 200-mph runs could be on deck for Saturday, too, but only that trio reached the 6.70s on Friday.