Even after a brief hiccup last weekend in Indy, where an electrical issue led to his only first-round loss of the NHRA regular season, Smith remains confident in his Denso Auto Parts/Stockseth/Matt Smith Racing EBR as he looks to win back-to-back world titles and his fifth overall world championship. He’s impressed at every turn over the past two seasons, and Smith is hopeful that will continue as the playoffs get underway at Maple Grove Raceway, where he has two career victories. 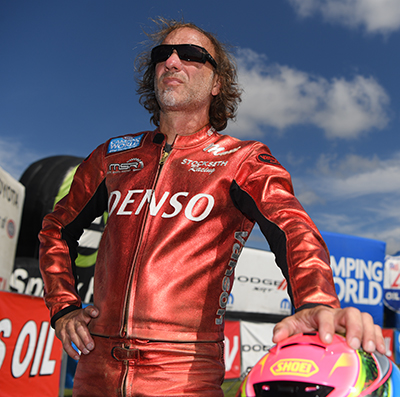 “I feel like we still have the best bike in the class, and I feel good about things heading into the Countdown,” Smith said. “I’m looking forward to it. It’s huge and so important to get off to a good start, and we’re going to Reading to make a statement. We want to build some points in qualifying, and we want to extend that points lead. We want to show what happened in Indy was a fluke and that we have the best bike. We tested after Indy, got our problem fixed, and we’re confident we’re going to be fast in Reading."

All the stars in Top Fuel, Funny Car, Pro Stock, and Pro Stock Motorcycle will look to start the playoffs in impressive fashion, with the beautiful hills of the beautiful Pennsylvania countryside providing a picturesque backdrop. The event, which is the first of six Countdown to the Championship playoff races in both Pro Stock and Pro Stock Motorcycle, will be televised on FOX Sports 1 (FS1), including final eliminations on Sunday, Sept. 12 at 2 p.m. (ET). For Smith, it’s simply about returning to form after some misfortunate in Indy.

Eddie Krawiec took advantage there, winning the NHRA U.S. Nationals for his first victory of the season, and Angelle Sampey also impressed with a trip to the finals. Smith will have plenty of other marquee challengers as well, including Steve Johnson, who is second in points, teammate Scotty Pollacheck, Ryan Oehler, Joey Gladstone, his wife, Angie, Karen Stoffer, and Andrew Hines. But the defending world champ has always embraced those challenges and is preparing for what could be a record-setting weekend in Reading.

“It’s very fast there, and if it’s dry and cool, you’re going to see some big numbers, and you might see that e.t. record fall,” Smith said. “You’re definitely going to see some 200-mph runs, but I feel like we always run well in the Countdown. We do our testing throughout the year, so we’re ready for the Countdown, and I think we’ll be there fighting for the top. I don’t think we’ve shown everything we have. We know how to go fast, and I think we’ll be really good [in Reading].”

To purchase general-admission or reserved seats, call 610-856-9200. Tickets also are available online at www.maplegroveraceway.com. Kids 12 and under are free in general-admission areas with a paid adult. For more information about the NHRA, visit www.NHRA.com.