NHRA Drag Racing returns to historic Auto Club Raceway at Pomona for the first time in nearly a year and a half with an opening day that will include spectacular nighttime qualifying, fireworks, and more under the lights at the famed facility.
30 Jul 2021
Phil Burgess, NHRA National Dragster Editor
Race coverage

More than five months later than its traditional mid-February date as the annual kickoff to the NHRA Camping World Drag Racing Series season, the Lucas Oil NHRA Winternationals presented by ProtectTheHarvest.com returns NHRA Drag Racing to historic Auto Club Raceway at Pomona for the first time in nearly a year and a half.

Until an open Sportsman-class test and tune day on Thursday, nary a tire had been turned at the storied venue since Feb. 9, 2020, and the conclusion of the 2020 Winternationals. A month later, all NHRA racing was suspended for several months due to the pandemic that ultimately led to the cancelation of Pomona’s traditional season-ending Auto Club NHRA Finals.

Thursday’s test fest helped put down some fresh rubber on the tack in anticipation of the return of the 11,000-hp assault of NHRA’s Top Fuel and Funny Car entries that will thrill the Southern California fans with nighttime qualifying, the first scheduled Southern California nighttime racing since 2001, when NHRA hosted the 50th Anniversary Nationals in Pomona.

For decades in the 1960s, ‘70s, and early ‘80s, nighttime nitro was a huge part of the SoCal drag racing experience at local tracks such as Lions Dragstrip, Orange County Int'l Raceway, and nearby Irwindale Raceway, and the magic returns tonight with the first of three nighttime qualifying sessions (the remaining two take place Saturday night). 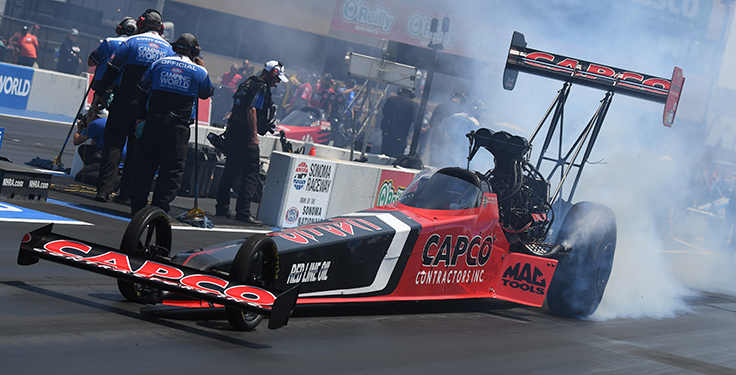 Three-time and reigning Top Fuel champ Steve Torrence will continue his quest to become the first Pro driver since 2009 to sweep the trio of Western Swing events. Torrence and his Capco Contractors team have won the first two events – in Denver and Sonoma – and will look to add their names to the history books this weekend.

Torrence, who in Sonoma became the first driver to clinch a spot in the 2021 Camping World Drag Racing Series Countdown to the Championship, will get tough competition from local female favorites Brittany Force and Leah Pruett. Although she doesn’t have a win this season, Yorba Linda-based Force has repeatedly qualified No. 1 and set low e.t. and top speed throughout the season. Pruett, formerly of Redlands, Calif., was the runner-up last weekend in Sonoma behind Torrence. 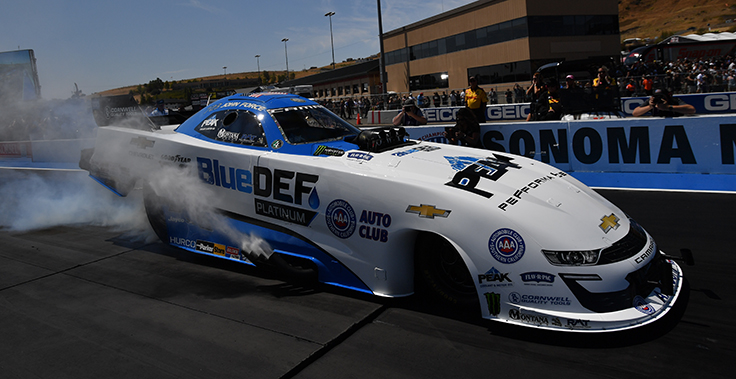 Sixteen-time Funny Car champ John Force is probably the only active driver to have made runs at OCIR or Irwindale and will relish the chance to once again hit the loud pedal under the lights and shoot headers flames high above the roofline of his BlueDef Camaro Funny Car. Force won that summer 2001 event in Pomona – one of 16 Wallys he’s collected at Pomona events – and would love to repeat the feat.

His toughest competition may come from his teammate Sonoma winner Robert Hight, whose final-round victory stopped Denver champ Matt Hagan from also having a chance to sweep the Swing, a feat that only Force has accomplished in Funny Car, way back in 1994.

Pro Stock points leader Greg Anderson has collected a dozen wins in Pomona – equally split between the Winternationals and the Finals – and will continue his assault on the record books as he attempts to pass Warren Johnson as the sport's winningest Pro Stock driver.

Anderson, a two-time winner already this season, is one win away from tying Johnson, but he’ll have to fend off the efforts of four-time world champ Erica Enders, who is no doubt stinging after a rare holeshot loss in Sonoma, and a cadre of young guns, including Aaron Stanfield, Dallas Glenn, Troy Coughlin Jr., Mason McGaha, and Kyle Koretsky, all eager to continue to carve their reputations at the expense of the veterans. 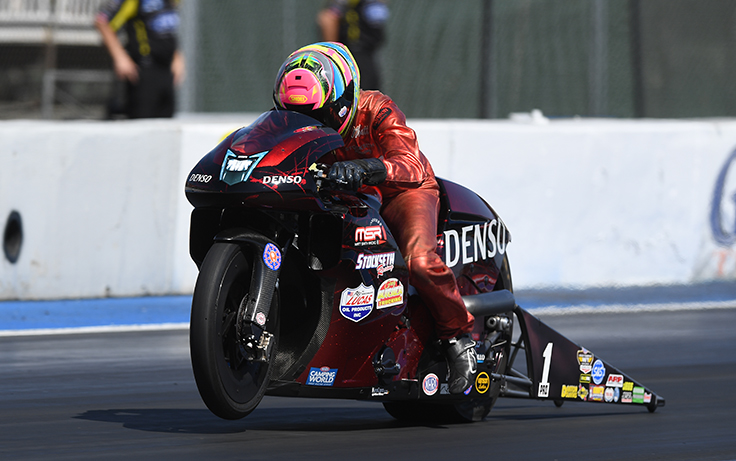 The Pro Stock Motorcycle has never before competed at the Winternationals, so someone will have the honor of winning the event’s first two-wheeled title. Points leader Matt Smith, who set a stunning national speed record of more than 205 mph last weekend in Sonoma, is the odds-on favorite, although he’ll get plenty of argument from the Vance & Hines Buell duo of Andrew Hines and Eddie Krawiec – respective runners-up in Sonoma and Denver – and their Suzuki teammate Angelle Sampey, who won the summer 2001 event.

The historic hot rods will fire their engines simultaneously, their exhaust pipes cackling from the potent blend of nitromethane, offering a rare spectacle of senses. Nightly fireworks will also help bring the show to an exciting conclusion. Experience a throwback to the summer nights of racing in SoCal that is sure to be unforgettable.

EVENT SCHEDULE:
NHRA Camping World Drag Racing Series qualifying will feature one round at 7:15 p.m. PT on Friday, July 30, and the final two rounds of qualifying on Saturday, July 31 at 3:30 and 6:30 p.m. Final eliminations start Sunday at 10 a.m.