News and notes from final eliminations at the 40th and final Lucas Oil NHRA Southern Nationals at Atlanta Dragway.

Antron Brown and Doug Kalitta put on a show to open up eliminations in Atlanta, with Brown's 3.793 at 317.19 slipping past Kalitta's 3.800 at 322.19. Kalitta had been going for his 50th career win on Sunday, but that will have to wait another day as Brown looks to end his successful track record at Atlanta with one last victory.

Both Shawn Langdon and Leah Pruett had problems in their matchup, but it was Langdon who advanced, doing just enough with a 4.048 at 294.43 to beat Pruett, who had more trouble near the finish line and went 4.071 at 237.00. Something went wrong during Clay Millican's burnout and that put an immediate end to his weekend. It might not have mattered, though, as Justin Ashley turned heads with the quickest run of the round with an impressive blast of 3.746 at 323.12.

Tim Wilkerson made an immediate statement to kick off Funny Car eliminations, running an event-best 3.963 at 320.58 to easily dispatch Terry Haddock, who got loose and nearly crossed the center line. After making two solid runs on Saturday, things then got really hairy for Ron Capps, who somehow kept his car from the wall in beating Jim Campbell. He made two hard moves on the top end, but maintained control, going 4.316 at 214.86 to advance. It was a stark contrast to qualifying for Capps, who will look to return to that form in the second round in a classic matchup with John Force. 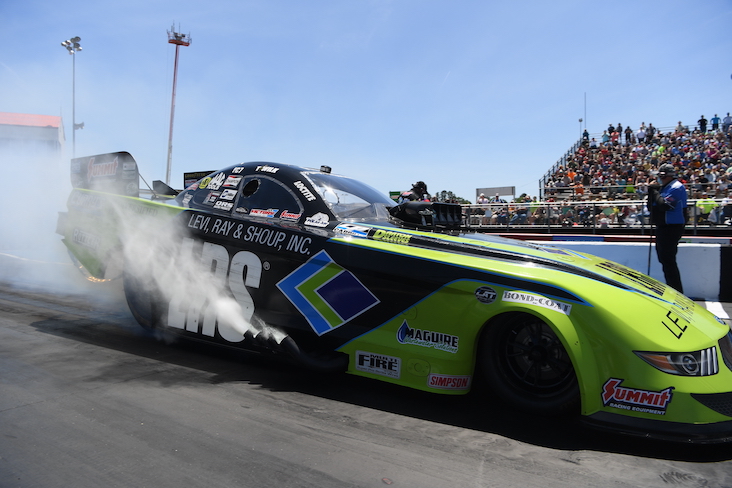 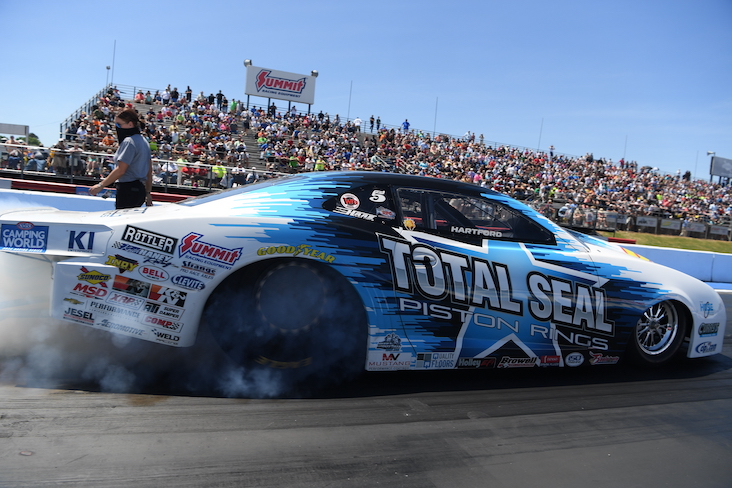 Matt Hartford saw Dallas Glenn leave first as the rookie posted a stellar .002 reaction time, but Hartford put together one of the better runs in the opening round in Pro Stock,  powered past Glenn with a 6.592 at 207.37 to advance. It doesn't get any easier for Hartford, who will now try to beat No. 1 qualifier Greg Anderson in the opening round. The Gainesville winner made the top run of the opening round and appears to be locked in trying to close out Atlanta Dragway in style. 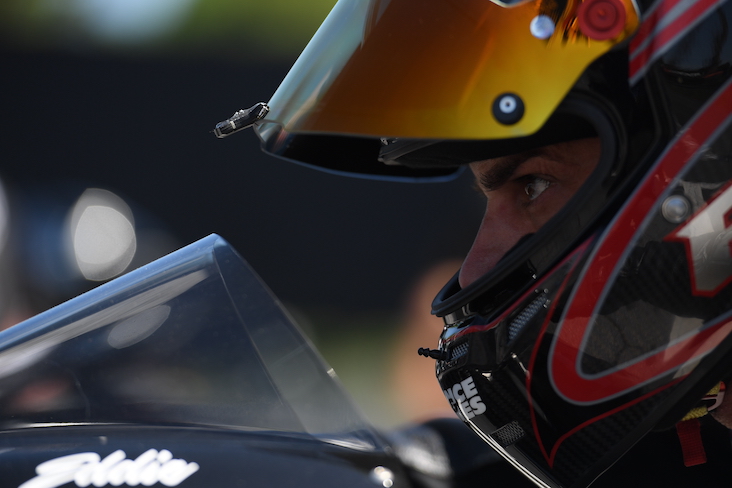 Vegas winner Ryan Oehler got a free ride on his birthday to open eliminations and it could turn out to be the best present he could ask for, as his bike shut off during his run. But Cory Reed suffered a mechanical issue and couldn't even stage the bike. It proved to be a great gift for Oehler, who went just 9.866 at 87.93.

Moments later, Eddie Krawiec had the pass of the opening round, impressing everyone by going 6.798 at 201.07 in his first race of the 2021 season in Pro Stock Motorcycle. He's been a 200-mph machine throughout the weekend on his new Vance & Hines Buell and will try to do it one more time in the second round against Andrew Hines.

In all, the debut weekend for the new bikes couldn't have gone much better for Hines and Krawiec. Hines recorded his first career 200 mph run, while Krawiec has now made three of seven fastest runs in class history. The opening-round win was the seventh-fastest, while his passes of 201.70 and 201.19 in qualifying were second and third, behind only Matt Smith's record pass of 201.76 in Gainesville in 2019.

A No. 1 qualifier did little for Khalid alBalooshi on Sunday in the opening round of eliminations in Pro Mod, as he got into the middle of the track, hit a cone, and fell in the first round.

No. 16 qualifier Justin Jones was the beneficiary, scoring the upset round win to keep his day alive. Jones only went 6.422, but it didn't matter as alBalooshi got loose. 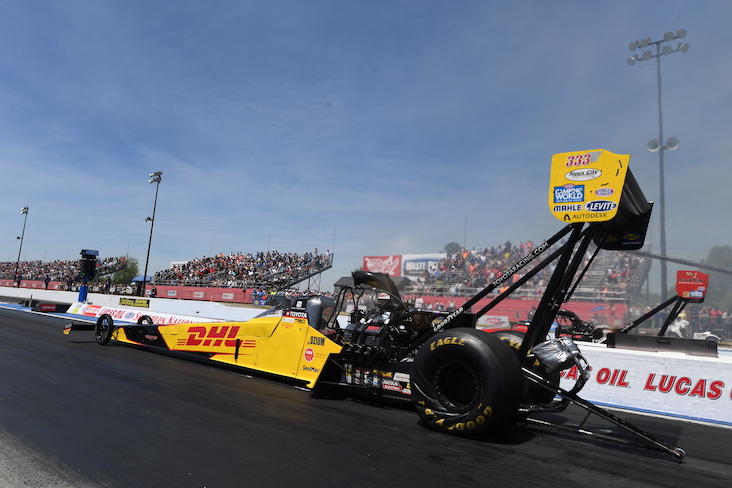 Sometimes it's just your day and Sunday is turning into that for Shawn Langdon. He has yet to make a full pass through the first two rounds in Top Fuel, but he's found himself in the right place at the right time and he's now in the semifinals.

After beating Pruett in the opening round, Langdon got another fortuitous break in the second round when Mike Salinas went red by a mile, leaving .069 early to throw away a run of 3.789 at 322.73. Langdon was glad to take advantage, as he had trouble down track, going 3.917 at only 258.52. It's the second straight round where the former world champ wouldn't have won the round had he been paired with anyone else, yet he's now in the semifinals.

Given a third chance now, Langdon and his Kalitta Motorsports team will be eager to make a strong showing in the semifinals, when he'll meet points leader Steve Torrence. With Langdon second in points and seeking his first win of the season, it's a great opportunity to add to the team's early-season momentum. It would also give Langdon his first victory at Atlanta Dragway. That would be a big deal for Langdon, who has also enjoyed the massive turnout of fans this weekend.

"Being second in points, you feel good and it’s a good start to the season," Langdon said. "We’re just focused on trying to get the win and hopefully continuing that good success early in the season. Obviously, with everything that’s gone on, it’s just good to see people, and it’s good to see people with a smile on their face."

Vincent Nobile's cameo this weekend in Pro Stock has turned into a chance for his first victory since the 2018 Reading event (above). Nobile is running an Elite Motorsports Camaro this weekend and he's in the semifinals after getting a few strokes of good luck in the first two rounds.

Remarkably enough, Nobile is the most recent winner in Atlanta, winning in 2018. Pro Stock didn't race at Atlanta Dragway in 2019 and the entire race was postponed a year ago due to the COVID-19 pandemic, giving Nobile a great opportunity to win the last two races at the track. 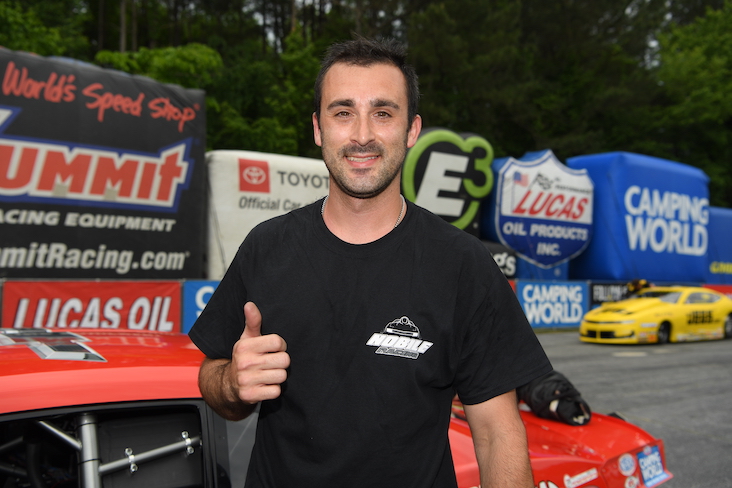 He beat Troy Coughlin Jr. in the opening round when Coughlin let off the gas immediately. Nobile ran 6.615 at 208.39 that round and 6.635 at 208.23 a round later, and while neither was spectacular, it was enough to do the job. As the top performances in the second round reached the 6.50s, Nobile advanced when Aaron Stanfield went red.

He'll now try to keep his good fortunes going against Deric Kramer in the semifinals, who had his own wild time in the second round. Kyle Koretsky flickered the staging bulb and then immediately took off, going red. Meanwhile, Kramer blew the tires off immediately, going just 15.346. Should Kramer struggle again, Nobile just may find himself in his first final since the 2018 campaign.

"I couldn't have expected to be in this position, but it's good to be back," Nobile said. "It's been a great weekend so far and we're looking forward to seeing what we can do." 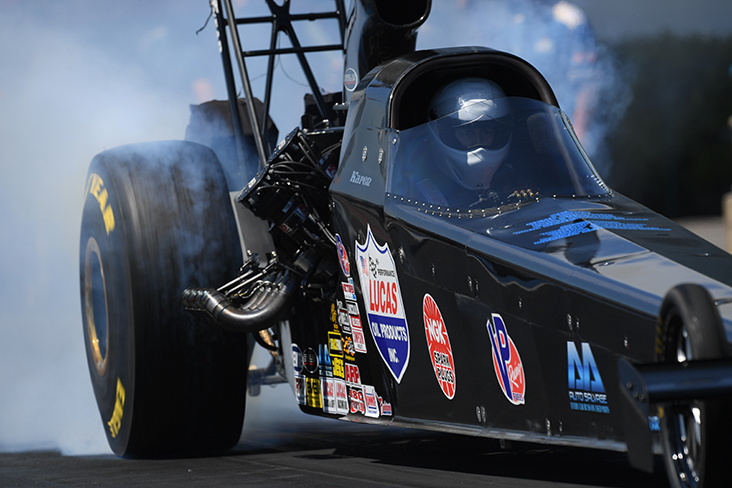 Karen Stalba will take on Rich McPhillips Jr. in the semifinals of Top Alcohol Dragster and gunning for her third Southern Nationals final-round appearance.

Her first? It came at the 2005 event when she was racing under her maiden name, Karen Benkovich. The driver she lost to in the final? Rich McPhillips Sr.

In addition to her runner-up to McPhillips Sr. in 2005, Stalba also was runner-up to Ashley Force the next year. (A Karen did with the Atlanta event the next year, but it was Karen Stoffer in Pro Stock Motorcycle.)

Force, of course, made history at the 2008 Atlanta event as she scored the first Funny Car win by a female. 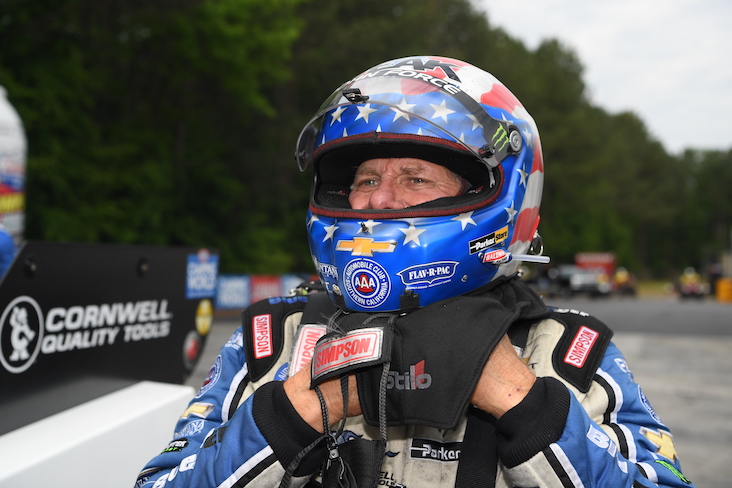 John Force and Antron Brown have praised Atlanta fans all weekend at Atlanta Dragway, telling them multiple times they've loved racing at the facility. It's not idle talk, either, as they've both had tremendous success at the facility and now both have a chance to leave with one final memory.

Brown moved into the final round in Top Fuel and Force did the same in Funny Car, setting the stage for an epic final at Gerogia's House of Speed. Brown has six total wins at Atlanta, with four coming in Top Fuel and two coming in Pro Stock Motorcycle, and can end his time in Atlanta with the most Top Fuel wins in NHRA history.

It would be a huge achievement for Brown, who enjoyed success early in his career at the facility in PSM before moving to the nitro ranks. Before racing on Sunday, Brown praised the fans at Atlanta Dragway, calling them some of the most supportive and passionate fanbases in the country. He obliged by putting on a show in the semifinals, squeaking past Brittany Force on a small holeshot. He went 3.786 at 320.51 to slip past B. Force's 3.785 at 323.89. He'll meet good friend Steve Torrence in the final round.

Meanwhile, J. Force can make his own history - what else is new - by picking up the win in the final round against Bob Tasca, who is searching for his second straight victory in 2021. It would give Force eight wins at Atlanta Dragway, tying him with the late, great Dave Schultz for the most wins at the track in NHRA history. His thrilling victory over J.R. Todd in the semifinals, where he went 3.984 at 325.22, brought the huge Atlanta crowd to his feet as they gave him a rousing ovation. 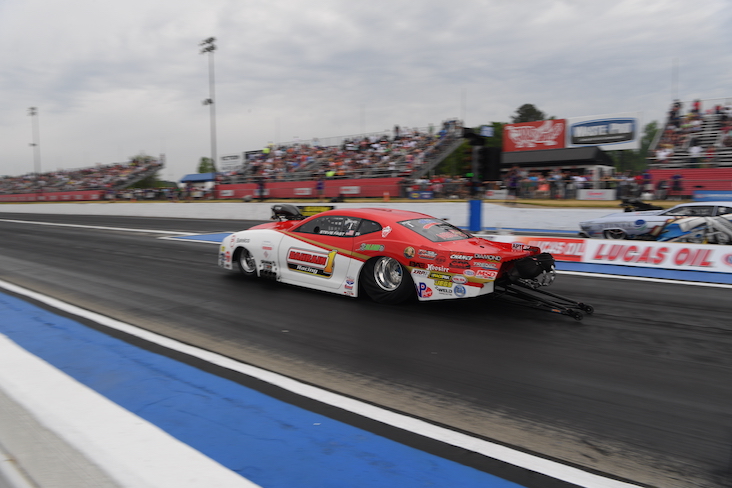 He didn't qualify at the opening race of the 2021 season in Gainesville, a rare mishap for the talented driver, but he's rebounded just fine and doing so at his home track on Sunday. Jackson moved into the final round in Pro Mod, beating Justin Jones with a 5.771 at 250.46 in his blown Bahrain 1 Racing Camaro in the semifinals, putting him closer to his first career Pro Mod victory at his home track.

That's just as meaningful for Jackson as putting his Gainesville struggles behind him. He's long been a fan of the facility and its vast history, and winning the final race at a track he holds near and dear would add another significant accomplishment for the two-time champ.

After qualifying fourth, Jackson beat Doug Winters and Mike Castellana, who had won the previous two Pro Mod races in Atlanta, before handling Jones in the semifinals. He's been locked into the mid-5.70s all weekend, delivering the type of performance his fans have come to expect in recent years. 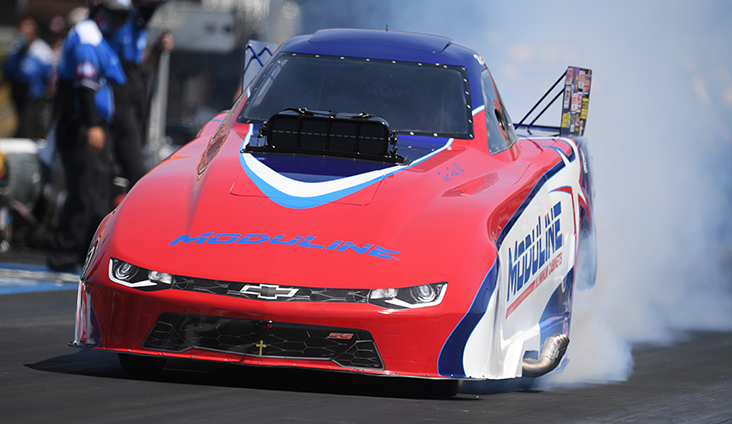 Rich McPhillips Jr. and Matt Gill both joined their fathers as winners in the Top Alcohol Dragster and Top Alcohol Funny Car classes.

McPhillips, whose father Rich Sr., won the Atlanta event for his first of five career wins, defeated Jackie Fricke while Gill, whose father, Paul, had three wins, bested Bob McCosh, who also was gunning for his first national event Wally.

Kent Hanley was in two final rounds and rebounded from losing the Super Comp final to Chuck Trotter to take the Super Stock crown over Brett Candies.