Saturday’s two qualifying sessions for the Lucas Oil NHRA Nationals were nothing short of spectacular and today’s final eliminations at Brainerd Int’l Raceway promises to deliver more of the same. There is more at stake today than just a coveted Wally trophy and the glory that goes with winning a national event. This is also the penultimate round in the Camping World NHRA Drag Racing series standings, so there figures to be a lot of shuffling among championship contenders in Top Fuel and Funny Car.

There was a dramatic weather change between Friday’s opening qualifying session and Saturday’s two runs that set the fields and Sunday figures to offer more of the same conditions that allowed for near-record performances. 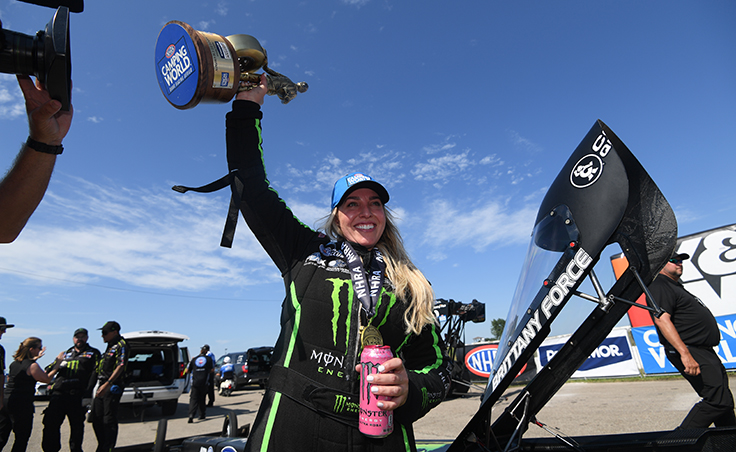 In Top Fuel, Brittany Force is riding a wave of positive energy following a breakthrough win last weekend in Topeka. Force and crew chief David Grubnic have dominated qualifying lately by taking the top spot at the last five races and her 3.67 from Saturday represents the second quickest run of the season for the Monster Energy team. With 11 cars in the field, Force is guaranteed a single run in the opening round and while she’s not in a position to track down Steve Torrence for the top seed in the class, a second-straight win is very much in play.

Speaking of Torrence, he’s already locked up the top spot in Top Fuel, but the reigning and three-time champion didn’t win in either Pomona or Topeka which for him, represents a mini-slump. Torrence qualified second with a 3.684 and from a strategic standpoint, that might be a better spot than No. 1 since he’s eligible for a bye run in the semifinals as long as the Capco team can survive the first two rounds. Torrence has won just about everywhere, but he’s never been the last man standings at Brainerd so that might provide an extra measure of motivation.

The opening round offers several interesting match-ups including a battle between Leah Pruett and Justin Ashley. They were scheduled to meet in the Pomona final earlier this month but Ashley had to withdraw after suffering symptoms of heat exhaustion. Today, he’ll have an opportunity to even the score against a rejuvenated Mopar team.

Clay Millican is also scheduled to take on Doug Kalitta in a battle between two teams looking to better their positions in the standings. While neither is likely to get bumped from the Countdown, Kalitta is No. 10 and Millican is No. 9 entering the Brainerd event. With a strong showing today, one of them will have the opportunity to improve their position by one or two spots. 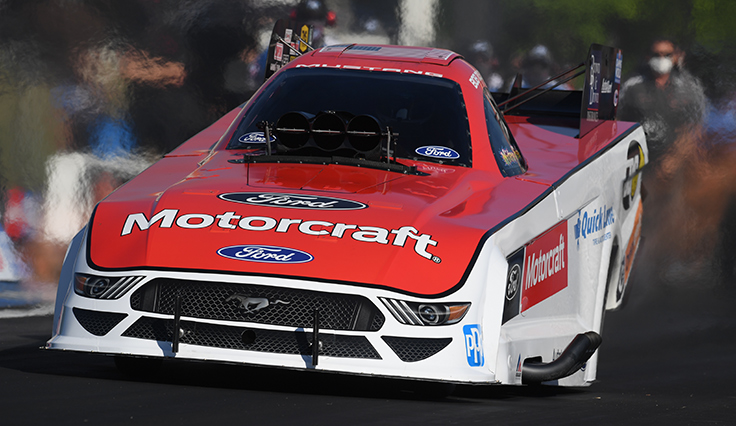 It's hard to call it a slump, but Bob Tasca III has not had the results he’s expected over the past four races and as a result, the Motorcraft/Quicklane driver has slipped from first to fourth in the Camping World Funny Car standings. The top six Funny Car drivers are tightly bunched together so Tasca has a very real chance to finish the regular season in first place and after claiming the top spot, he’s in a prime position to do so today. Tasca drove to a 3.870 on Saturday to lead the tough field and he also topped 334-mph, the best speed of his career. As a bonus, Tasca will also get a single run into the quarterfinals since there are 15 Funny Cars in the field this weekend.

Speaking of drivers whose fortunes have improved lately, Cruz Pedregon made his best runs of the season, including a 3.874, to land in the No. 2 spot with his Snap-on Dodge Charger. Pedregon earned a win earlier this season in Norwalk, but his results have been a bit inconsistent at times. He’ll have a prime opportunity to make up some ground today beginning with an opening-round race against Gary Densham, who is attending his 500th NHRA national event.

Ron Capps and John Force, the two most successful drivers in the history of the Funny Car class, will meet for the umpteenth time with Capps holding lane choice after wheeling the NAPA Dodge to a seventh-best 3.922. Force can never be taken lightly and he’s got plenty of momentum on his side after winning last weekend in Topeka. Force is also an 11-time winner at scenic Brainerd Int’l Raceway.

Force’s teammate, Robert Hight also has his hands full on Sunday morning with a round one race against J.R. Todd and his DHL Toyota. Hight has two wins in four finals this season while Todd has also shown an ability to get the job done with a win at the Gainesville season opener and three runner-up finishes to his credit. Normally, one would expect Hight and Todd to meet in the later rounds, but the level of competition in the Funny Car class often means that any round can offer the same amount of drama as a final.

The battle for the No. 10 spot in Funny Car is mostly settled with Blake Alexander holding a sizable lead over 11th ranked Jim Campbell, but that’s not to suggest there isn’t room for an upset. Alexander is coming off his best race of the season with a semifinal finish in Topeka but Campbell also went to the semi’s two races ago in Pomona behind the wheel of “Big Jim” Dunn’s DiPinto Logistics Dodge.