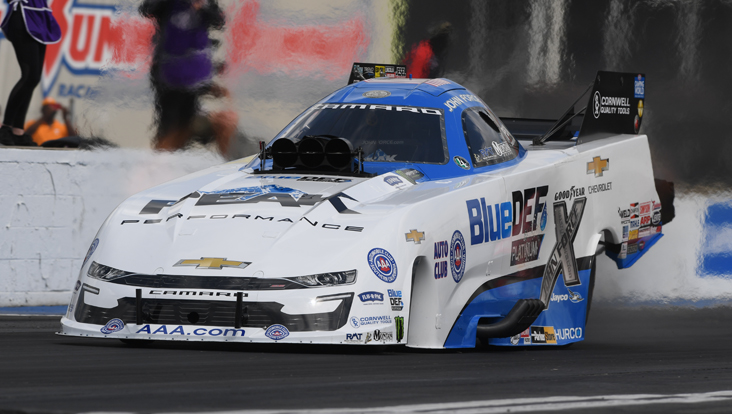 Should John Force reach the final round of today’s Lucas Oil NHRA Nationals, and there is a distinct possibility that he’ll do just that, it will mark the 2,000th round of Funny Car competition for NHRA’s all-time wins leader. Coming off a win last week in Topeka, Force entered Brainerd with a record of 1,376-620 which represented 1,996 rounds. Force made his first appearance at Brainerd Int’l Raceway in 1986 and lost in round one to Jim Head. He collected the first of his 11 Brainerd wins in 1998 when he beat John A. Martin in the final. Perhaps the most impressive statistic of all is Force’s overall, round win record at Brainerd Int’l Raceway which stands at an impressive 78-22.

UPDATE: With his opening-round loss, Force can reach 2,000 rounds with a semifinal appearance at Indy. 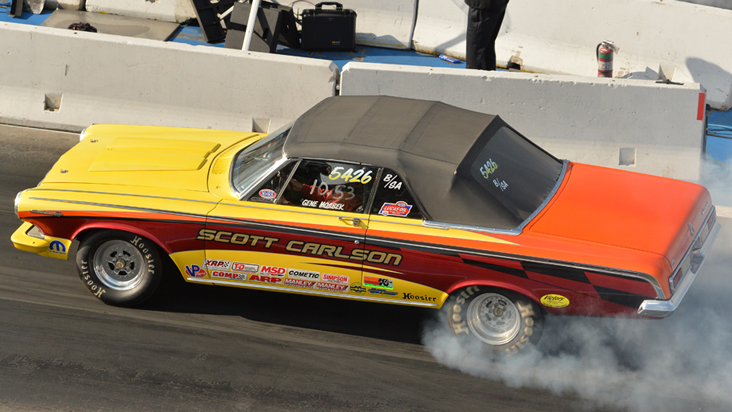 The first NHRA national event held in Brainerd was in 1983 and the professional champions were certified Hall of Famers Joe Amato (Top Fuel), Kenny Bernstein (Funny Car), and Bob Glidden (Pro Stock). At the same event, the Stock champion was Minnesota’s Gene Mosbek, who is still racing nearly 40 years later. Mosbek entered this year’s Lucas Oil Nationals behind the wheel of Scott Carlson’s vintage Dodge but couldn’t duplicate his success from years past losing against Mike Cotten in round one. 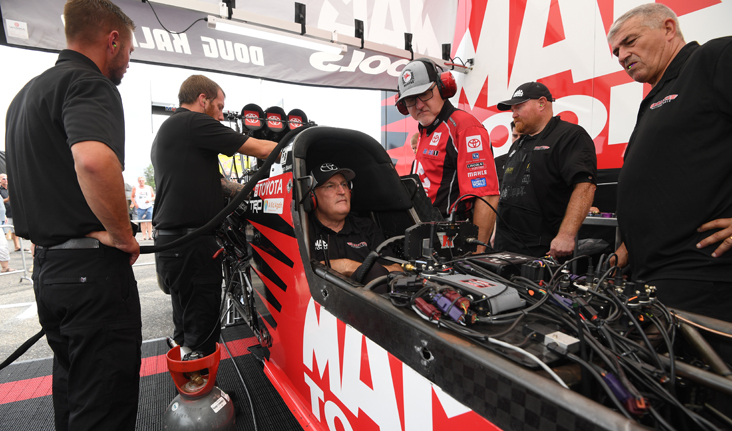 In one of the more baffling mysteries of the 2021 season, the Kalitta team continued to struggle in the first round in Brainerd with Top Fuel teammates Doug Kalitta and Shawn Langdon both taking a loss. Kalitta, who entered the Brainerd race as the No. 10 seed in the Countdown, ran a 3.809 that wasn’t nearly enough to cover Clay Millican’s 3.729. Kalitta will qualify for the NHRA playoffs because he’s attended all of the regular season events, but barring a dramatic turnaround at Indy, he’ll have a lot of ground to make up to catch the leaders.

Langdon also lost when he smoked the tires against Antron Brown, who was long gone with a 3.749. Langdon came into Brainerd as the No. 5 seed in Top Fuel but lost a spot to Mike Salinas. The beauty of the Countdown is that anyone who qualifies can win the championship so there is still time for a reversal of fortune, but with just the Dodge//SRT U.S. Nationals looming before the start of the seven-race playoffs, the clock is definitely ticking. 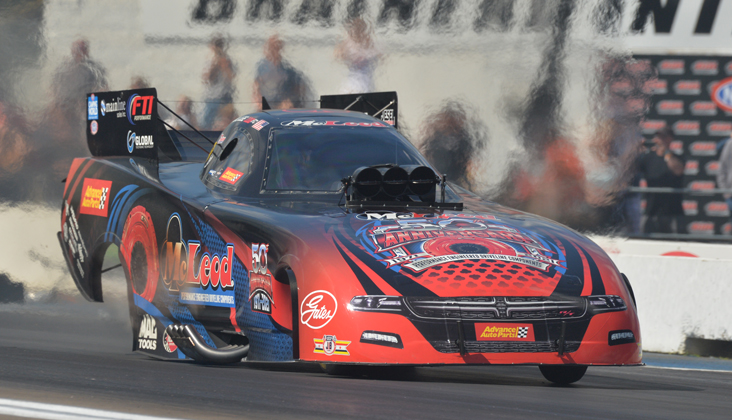 In drag racing, you don’t have to be perfect. Sometimes, you just need to be a little more fortunate than your opponent and that certainly applies to Paul Lee who got away with one in his round one win over past Brainerd winner Bob Bode. Lee’s McLeod Clutches entry dropped a cylinder and he slowed to a 4.320, but that was more than enough to take the win light after Bode got loose and knocked over a pair of timing blocks with his Arbee Dodge.

“The burnout was kind of a disaster too,” said Lee. “If it doesn’t have equal water under each tire one tire will try to grab and the other one won’t and it will tend to take you sideways. That wasn’t good. Then we’ll go on the run and at about half track it locked up started spinning the tires and got a little sideways and we were lucky to get by that round.”

For Lee, the win marked his third round win of the season and his firsts since taking out Bob Tasca III in the opening round in Denver. Lee came into the Lucas Oil Nationals 122 points out of a Countdown spot so he’s a long shot to make the playoffs but with extra points available at Indy, he’s not out of it yet. 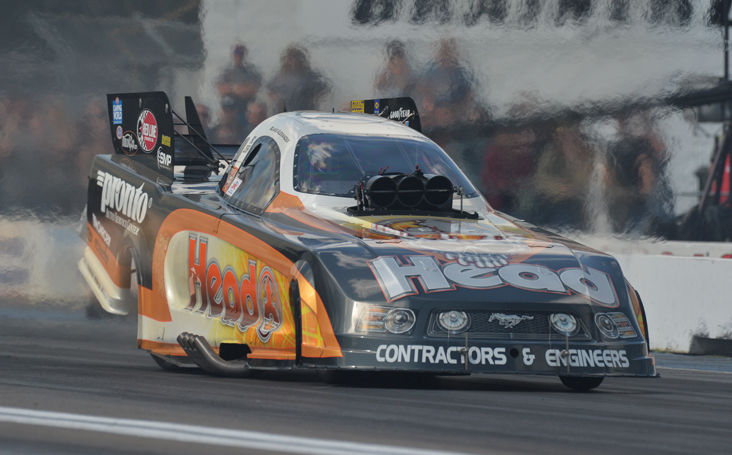 Coming off a semifinal finish last week in Topeka, Blake Alexander scored another big round win when he took out Alexis DeJoria’s RoKit/Bandero Tequila Toyota in what many described as the best race of the round. Alexander wheeled Jim Head’s Mustang to a 3.939 to stop DeJoria’s 3.940 in a race that was settled by just .002-second at the finish line. Alexander will face off against low qualifier Bob Tasca III in the quarterfinal round.

Pro Mod championship contender Justin Bond went for a wild ride in the opening round of eliminations when his Bahrain1 Camaro made contact with the retaining wall past the finish line. Bond, on a single run, made what looked to be a picture-perfect 5.76 run but the drama began shortly after the parachutes deployed. The car made a hard left turn into the retaining wall, severely damaging the front end. Bond got the car stopped and quickly climbed out under his own power but his day is almost certainly finished and it’s likely that Brandon Snider will get his second straight single run into the final round. 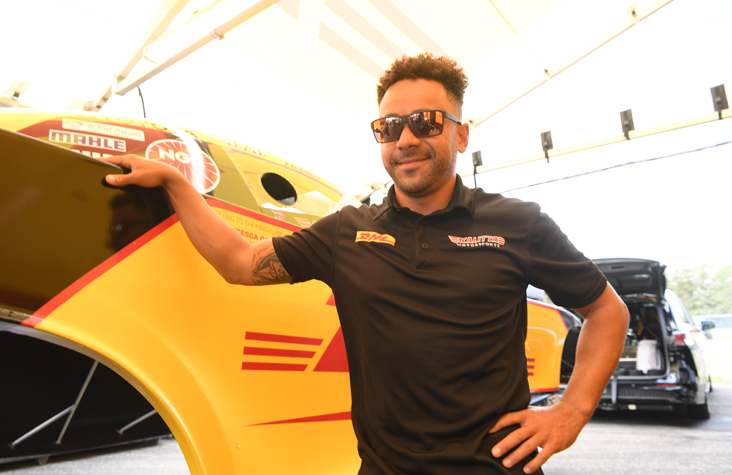 Two of the four quarterfinal races in Funny Car were decided on holeshots with Matt Hagan getting the best of Paul Lee while J.R. Todd used a starting line edge to stop Tim Wilkerson. Hagan, generally regarded as one of the best starting line drivers in either of the nitro classes, grabbed a slight lead against Lee, .070 to .095 and that proved to be the difference at the finish line as Hagan’s Mopar Charger turned on the win light with a 3.928 against Lee’s 3.911, his quickest run of the event.

In the next pair, Todd grabbed a slim .012-second lead against Wilkerson’s LRS Ford and it provided the difference in a race decided by a hundredth of a second at the finish line. The final score read 3.931 for Todd’s DHL Toyota and 3.929 for Wilkerson.