Teammates Leah Pruett and Matt Hagan will be looking for big outings at this weekend's Mopar Express Lane NHRA SpringNationals presented by Pennzoil at Houston Raceway Park.
20 May 2021
Posted by NHRA.com staff
Feature

It hasn’t been quite the start Leah Pruett wanted to her 2021 NHRA Camping World Drag Racing Series season, but the Top Fuel star has a great opportunity to change that this weekend, and the venue couldn’t be more ideal.

Racing in her 11,000-hp Pennzoil dragster, Pruett will look to put on a show at her sponsor’s race, the 34th annual Mopar Express Lane NHRA SpringNationals presented by Pennzoil at Houston Raceway Park. The eight-time event winner is searching for her first victory of the 2021 season, as well as her second victory at the facility. The first came in 2017, and Pruett will look to replicate that during a busy and thrilling weekend where she will also be competing in the popular Constant Aviation NHRA Factory Stock Showdown class.

“I’m very excited to get to Baytown [Texas]. We’ll be at sea level, and I have no doubt we’ll be making those fast runs that get all of us hyped up,” Pruett said. “I’ll be back to pulling double-duty, running both my Top Fuel dragster and Mopar Dodge Challenger Drag Pak. I truly feel like when we get to Houston, it’ll be our ‘get healthy’ race, and it’ll be a new beginning for us. We’re looking forward to laying down maximum horsepower on the Pennzoil proving grounds.”

Pruett will have a chance to get right in qualifying as she tries to advance to the final round for the first time in 2021 as well. Currently ninth in points, a win would go a long way in jumpstarting Pruett’s season, but to do so she’ll have to race past the likes of three-time defending world champ and Texas native Steve Torrence, Brittany Force, Shawn Langdon, Doug Kalitta, Mike Salinas, Justin Ashley, Antron Brown, Josh Hart, and Clay Millican. 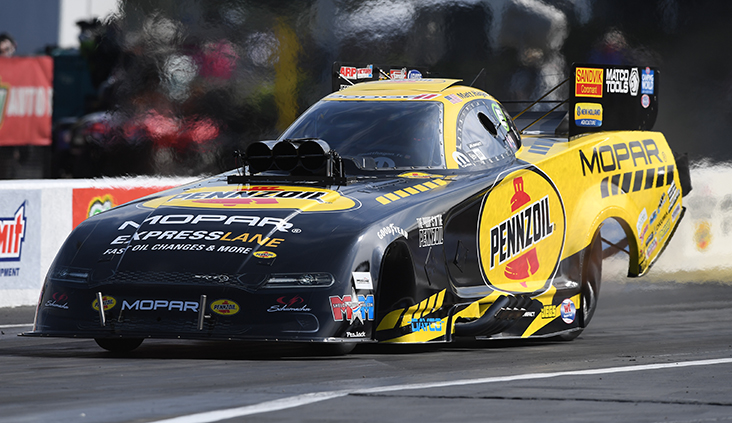 Defending Funny Car world champ Matt Hagan is also eager to get to Houston Raceway Park. He’s had a solid start to his 2021 campaign and is currently sitting fourth in points, but Hagan is still seeking his first victory of the season as well. Houston would be the perfect place to do that in his Pennzoil Dodge Charger SRT Hellcat Redeye.

The team, led by standout crew chief Dickie Venables, made positive strides in Charlotte, and Hagan believes the team is primed for a victory. To get it, the three-time world champ will have to get past the likes of points leader Bob Tasca III, Charlotte winner John Force, Gainesville winner J.R. Todd, Ron Capps, Tim Wilkerson, Cruz Pedregon, Alexis DeJoria, and Robert Hight.

“I’m pumped up to get to Houston,” Hagan said. “That’s where I got my first NHRA Funny Car win, so it will always have a special place in my heart. Houston always brings a great crowd, it’s a great facility, and it’s a Pennzoil racetrack. There’s nothing better than going to your partner’s event at a partner’s track, and we want to put on a great show. I have a great race car underneath me, and it’s handling well and responding to the changes we’re making to it. We’re excited to see all of the folks down there in Baytown, and it should be a fun weekend.”