Karen Stoffer's narrative has changed in her last two Countdown to the Championship appearances, and the Pro Stock Motorcycle veteran has a chance for another big finish heading to this weekend’s Auto Club NHRA Finals at Auto Club Raceway at Pomona.
09 Nov 2021
Josh Hachat
Feature

Karen Stoffer would be the first to admit she’s not always been at her best late in the season earlier in her career. But that narrative has changed in her last two Countdown to the Championship appearances, and the Pro Stock Motorcycle veteran has a chance for another big finish heading to this weekend’s Auto Club NHRA Finals at Auto Club Raceway at Pomona.

She’s fresh off back-to-back final-round appearances on what’s now a four-valve Big St. Charles/Ray Skillman Suzuki, and Stoffer has a strong opportunity to pick up a top-four finish for the second time in three years.

“I’m really excited for the end of the season. In my personal history, I tend to slip off and haven’t done quite as well, but it’s been a complete reverse of that this year, and that makes me very excited,” Stoffer said. “I’m very pleased with the program and things we’ve figured out. Our intent is to keep winning as many rounds as we can. The final round has been kicking my butt, but it’s very tough to event get to a final, so that would be phenomenal way to cap off the season.”

Two years ago, Stoffer had her most successful playoff run in her nine appearances, winning a race and advancing to two finals, but this year’s showing ranks right up there and has a chance to surpass it with a big weekend in Pomona.

With Jerry Savoie taking a couple races off due to Hurricane Ida earlier in the postseason, the White Alligator Racing team and crew chief Tim Kulungian made the decision to transition Stoffer’s bike to a four-valve Suzuki. Her two-valve Suzuki had performed well this year, winning in Sonoma, but it was a way to keep the program moving forward. 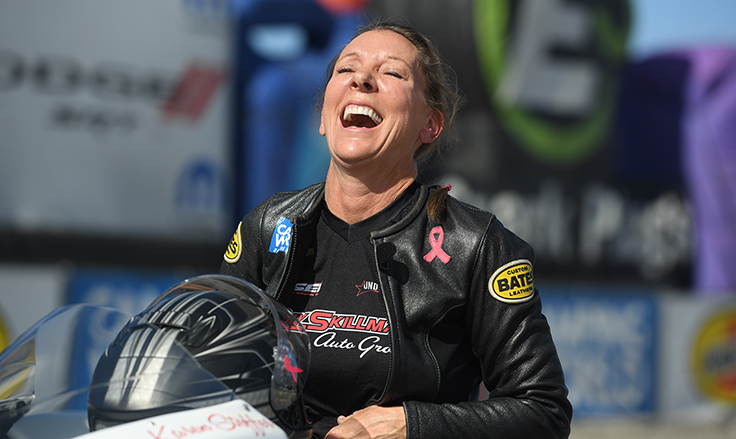 That change happened right before Bristol last month, and Stoffer responded with a track record run of 6.760 seconds in the final round, following it up with another stellar performance in Las Vegas. She went red in the final round against Steve Johnson but still managed a number of positive steps with the new (to her) setup.

“Tim and Jerry had the program turning around in Dallas with the four-valve, and we put it in my bike in Bristol, and we were able to continue what they started in Dallas,” Stoffer said. “We parlayed that into a lot of good runs. Coming into Las Vegas, we decided to maintain the same program, and we produced some more good numbers. I’m excited it’s worked out this way.”

With six round-wins in the last two races, Stoffer doesn’t consider herself a spoiler in the championship conversation but rather another standout bike capable of winning playoff races.

It’s been a mindset that has treated her well in the Countdown to the Championship, and she hopes that success continues in Pomona to close out the year.

There’s still a few goals remaining — including her first 200 mph run — but a first career Auto Club NHRA Finals victory would top everything for the veteran.

“I’m hoping if everything aligns we could get a win in Pomona, but it’s certainly not going to be easy,” Stoffer said. “I’m just focused on trying to do my job, and I’m definitely looking forward to the opportunity.”