In the span of one day at Sonoma Raceway, the outlook for the rest of the 2021 Pro Stock Motorcycle season changed dramatically for the White Alligator Racing (WAR) team of Karen Stoffer and Jerry Savoie.
28 Jul 2021
Josh Hachat
Feature

In the span of one day at Sonoma Raceway, the outlook for the rest of the 2021 Pro Stock Motorcycle season changed dramatically for the White Alligator Racing (WAR) team of Karen Stoffer and Jerry Savoie.

In what could very much be deemed a turning point of the season, Stoffer put together a pair of stellar qualifying passes on Saturday and Savoie followed with an impressive pass to close out qualifying, with both producing arguably their best runs of the season.

Stoffer rode that momentum to the victory at the NHRA Sonoma Nationals on her Ray Skillman Auto Group/Big St. Charles Motorsports Suzuki, while Savoie advanced to the semifinals in what was, by far, his best showing of the year.

“It was huge for the team,” Stoffer said. “We demonstrated some potential in Charlotte with my two-valve bike (advancing to the final quad), but we had to get some pieces together and get everything in place for the four-valve (Suzuki for Savoie). It was a really good feeling for the team and to parlay that into Sunday and a good raceday, that was definitely exciting.”

Savoie had yet to win a round this year before heading to Sonoma and had qualified no better than 10th through the first six races.

But crew chief Tim Kulungian found his groove with both bikes, as Savoie qualified sixth with a 6.761 and Stoffer second with a stout 6.750. They met up in the semifinals, which guaranteed a team bike in the finals and Stoffer finished off the day with a spectacular performance in the championship round against Andrew Hines, going 6.798 at 197.36.

After sitting out the 2020 season, it took some time for everything to get aligned for Stoffer. But the veteran likes the path this team is headed and made sure to relish the memorable moment of winning in Sonoma.

“It was great and then when you couple that with the emotional presence of Sonoma, it was special,” said Stoffer, who picked up her 10th career win. “It’s basically what Gary and I call our home track and anything in Division 7 is a special place for us. All of our family and friends were there and, in addition, Tim’s family was there and they had never been to an event where he had won. 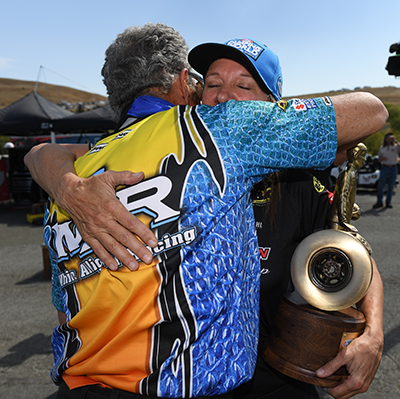 “There were just a lot of positive vibes and emotions, and good feelings. Everyone was upbeat, everyone was collaborating and it was a very good feeling. It’s weekends like that you always remember.”

The good thing is Stoffer and Savoie have a chance to replicate those feelings almost immediately as they head to Auto Club Raceway at Pomona for this weekend’s Lucas Oil NHRA Winternationals. Conditions will be far different from Sonoma, but Stoffer believes the team has things clicking on both the two-valve and four-valve Suzukis.

Their 60-foot times were dramatically improved last week, which was a major sign things are on an upward swing for both riders. Stoffer jumped to fifth in points and Savoie moved to 12th, staying in striking distance of a playoff spot in the Countdown to the Championship. The key, Stoffer believes, is staying keyed in on the task at hand.
“
One track and one win doesn’t constitute any type of pattern, but we’re optimistic,” Stoffer said. “Tim and I have done a good job of gelling and we’re optimistic that Jerry will continue to do well. We have to keep focusing on racing every round and the race in front of us, trying to get the maximum we can out of the bike.”