Karen Stalba buckling in for brimming second half of exceptional season

A fruitful first half of the 2021 season of NHRA's Lucas Oil Drag Racing Series is in the books for the Stalba Motorsports team, and the multi-car family operation has a jam-packed calendar in the weeks ahead.
18 Aug 2021
Posted by NHRA.com staff
Feature

A fruitful first half of the 2021 season of NHRA's Lucas Oil Drag Racing Series is in the books for the Stalba Motorsports team, and the multi-car family operation has a jam-packed calendar in the weeks ahead.

Top Alcohol Dragster standout Karen Stalba is leading the charge for the team that includes husband and eight-time division champion Tom Stalba and their active Jr. drag racing kids, Paul and Emily. The "Fastest Mom in South Jersey" will be breaking into the second half of the season with one of the quickest Top Alcohol Dragsters in the series.

"We'll start in the Northeast, and then it's like a world tour for us," said Stalba, who noted that the team will launch into a strenuous span of seven races in eight weeks, beginning August 20-22 with the LODRS regional event at New England Dragway.

"We've worked together as a family to get everything prepared for this next stretch of races. Everybody pitches in, and my crew chiefs have been driving down from Massachusetts to work on things," Stalba continued. "We definitely feel ready to build on the success that we've already experienced this year. It's been great, but we're ready for more."

Stalba, with crew chiefs "Mean Gene" Gallant and Bob Smullen at the helm, has so far raced to four low qualifier awards and two final-round appearances on the season. The 2011 Division 1 Top Alcohol Dragster champion had been away from the category since 2018 to focus on family and business, but immediately upon her return for this year's LODRS regional event at Gainesville Raceway – the "Baby Gators" – Stalba knew she was in for one heck of a ride.

At Gainesville Raceway, Stalba qualified loftily in the No. 3 spot. Geared up to go fast, she was right back in form the following weekend at the NHRA Camping World Drag Racing Series season-opener at Gainesville with the fastest Top Alcohol Dragster on the property. Stalba blazed to a then-career best 5.172-second pass at 280 mph to lock down the No. 1 qualifying position, and she raced to the semifinals on Sunday at one of NHRA's most esteemed events. 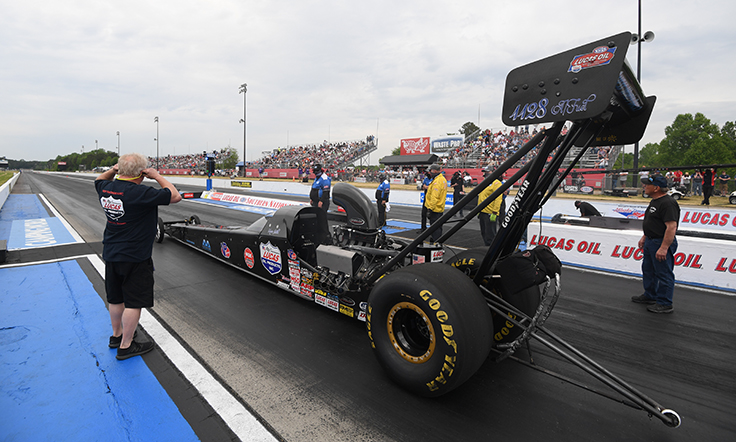 Another No. 1 and semifinals appearance were secured at her next scheduled event, the final NHRA Southern Nationals at soon-to-be shuttered Atlanta Dragway. Two weeks later, Stalba was No. 1 again and rocketed to the final round at NHRA's NGK/NTK Performance Four-Wide Nationals in Charlotte, recording career-best numbers along the way with a stellar 5.147, 282.07.

The Summit Racing Equipment NHRA Nationals in Norwalk came with another runner-up followed by yet another low qualifier award for Stalba, this time at the Norwalk regional race with an impressive 5.161 blast to reset the Summit Motorsports Park track record.

Stalba is holding onto a Top 10 spot in the Top Alcohol Dragster national standings as she enters the latter half of a banner year. Now a four-time finalist at the national level, the humble yet fired-up A/Fuel campaigner is closer than she's ever been to victory.

"We haven't won yet, but we've been close," said Stalba with a modest grin and a grateful nod to supporters Lucas Oil Products, NGK Spark Plugs, and Hussey Copper. "I know that as our program continues to come together, the wins are going to come. I'm confident in my car and these guys, and it's good to know that they're confident in me and just as excited for what's to come."