This might be Justin Ashley’s first time in the NHRA Camping World Drag Racing Series Countdown to the Championship, but the rising Top Fuel star isn’t letting the moment get to him.
15 Sep 2021
Posted by NHRA.com staff
Feature

This might be Justin Ashley’s first time in the NHRA Camping World Drag Racing Series Countdown to the Championship, but the rising Top Fuel star isn’t letting the moment get to him. Ashley, the NHRA’s reigning rookie of the year, advanced to the final round of the first race of the playoffs and will look to keep that momentum rolling at this weekend’s DeWalt NHRA Carolina Nationals at zMAX Dragway.

The strong start to his first playoff appearance bumped Ashley from seventh to fourth in points in his Smart Sanitizer/Strutmasters.com Top Fuel dragster. The fall race at state-of-the-art zMAX Dragway in 2019 marked Ashely’s first career Top Fuel race, where he advanced to the semifinals. It was a memory Ashley won’t forget and he’ll try to create an even bigger moment at the third race in a rigorous stretch of four straight race weekends. 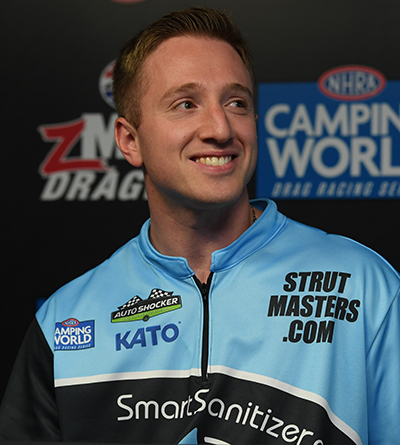 “I love everything about racing in Charlotte. It is a beautiful facility, and since it is a Bruton Smith track, you know everything will be first-class,” Ashley said. “I remember my first race there in 2019. I just wanted to do my best, and we raced to the semifinals and almost made the finals. I know how hard [team owner] Dustin Davis, [crew chief] Mike Green, and the crew guys are working right now, and it is a complete team effort.”

Steve Torrence (Top Fuel), Robert Hight (Funny Car), Deric Kramer (Pro Stock), and Andrew Hines (Pro Stock Motorcycle) were winners of the 2019 event. This year’s race will be televised on FOX Sports 1 (FS1) and FOX, including live final eliminations coverage on FOX, starting at 2 p.m. (ET) on Sunday, Sept. 19. It is the second of seven races in the Countdown to the Championship and the 15th of 20 races during the 2021 season, and Ashley is thrilled with how his team is performing.

In Reading, he knocked off points leader and three-time defending world champ Torrence in the semifinals, pulling within 55 points of first. Of course, Torrence has been dominant in recent seasons, and that includes an incredible stretch of five straight wins at zMAX Dragway. Ashley will also have to take on championship hopefuls like Reading winner Billy Torrence, Antron Brown, and Leah Pruett, but the young standout could be peaking at the perfect time. He also showed impressive resolve in his first playoff races, beating a trio of championship contenders en route to his runner-up finish in Reading. Repeating that throughout the Countdown to the Championship won’t be easy, but Ashley showed he’s capable.

“Everyone out here racing at an NHRA national event is a tough competitor, but when you also add on the fact that every driver I raced on Sunday was in the Countdown, that makes me very proud of this Top Fuel team,” Ashley said. “We’ve made it to two finals in the last five races. That’s a testament to Mike Green. He’s gone above and beyond to put his imprint on this program. I could not be more pleased with the results. This is what I have dreamed about, and I am so fortunate to be able to chase this Top Fuel championship with this group of amazing teammates.”